ROAR Magazine is an online journal of the radical imagination providing grassroots perspectives from the front-lines of the global struggle for real democracy.

The core mission of ROAR is to inspire the radical imagination by building bridges between academia and the streets, between countries and continents, and between different strands of leftist thought and practice. As an online magazine, ROAR’s main activity is to publish political essays and films on a wide range of topics broadly relating to international social movements and progressive politics. ROAR traditionally has a special interest in covering popular mobilisations, community organising, grassroots democratic initiatives and anti-capitalist theory and practice. 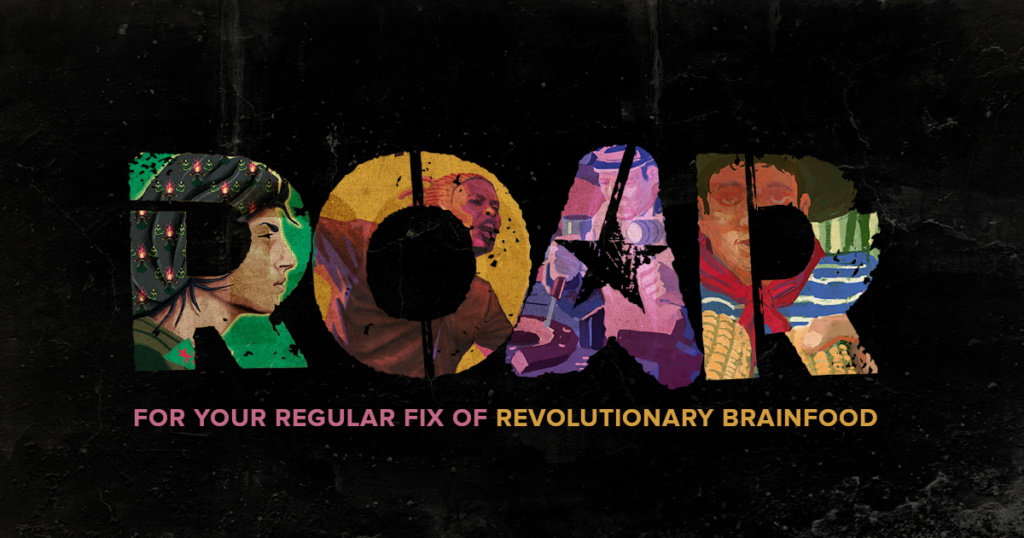 Over the past decade, ROAR has offered a platform to hundreds of scholars, activists and organisers to share their reflections on topics ranging from anti-austerity movements to climate protests, Indigenous resistance to feminist struggles, and racial justice movements to progressive party politics — to name just a few examples. Of course, ROAR is not unique in covering these various movements, but by bringing them all together on a single platform with a clear political identity, they are conveying a strong message to readers that rather than isolated events, these movements are in fact all connected.

As an activist project, ROAR has for the larger part of its existence depended on volunteers — editors as well as contributors — dedicated to the project’s core mission and willing to put in their time and effort in order to start building “a new society in the shell of the old.” As such, ROAR is solidly embedded in (and a fundamental part of) the numerous direct actions, social movements and popular uprisings witnessed over the past decade.

ROAR is a profoundly internationalist project with a diverse and worldwide readership. The majority of ROAR readers are based in Western Europe and North America, but over the years copies of ROAR’s print edition have also found their way to subscribers in places as far apart as Indonesia and Ecuador, Zimbabwe and Slovenia. And not only the readers, also the contributors come from all over the world: in the past few months alone they’ve published essays from authors based in five different continents. Everyone is welcome to submit their work for publication on ROAR, and thousands of writers have done so over the years. Each submission is judged solely on the quality of the copy, the relevance of the story and the value of its political insights.

Over the years, ROAR has welcomed hundreds of thousands of readers; built a social media followership of over 130,000 followers; added over 6,000 subscribers to its email newsletter list; published more than a thousand essays; released eight print issues and three digital issues; and has collaborated with scores of media partners and organisers (as well as projects that have received Guerrilla funding, such as MINIM Municipalist Observatory and Frank Barat’s “COVID-19 Chronicles,” which have been hosted on the ROAR blog).

Since all content on ROAR is available for free and published under a creative commons license, a lot of their material has been republished on other websites, printed as book chapters in edited volumes and included in university courses. Essays that were first published on ROAR have been translated into dozens of different languages. Many authors have been invited onto radio shows, to conferences, webinars, etc., and some authors have also landed book contracts based on their essays published on ROAR.

This grant is essentially, a bare bones core funding grant. It closes the ROAR funding gap for 2021. This enables ROAR to engage their freelance editors and commission up to five long-read essays a month until the end of the year. They will also be able to move ahead with the planning for a special online issue marking the tenth anniversary of the global wave of protests of 2011, which is also the year ROAR was founded. This issue will be released towards the end of 2021.

Ever since the release of the inaugural issue in the fall of 2015, ROAR’s special issues have held centre-stage, offering an opportunity to take a step back from the news cycle and investigate core themes that help deepen understanding of salient social problems. In the eleven special issues published so far, themes such as work, finance, climate change, internationalism and European democracy, have been covered. In the issue being prepared for this year, the focus will be on the historic crossroads the international left currently finds itself at and how to prepare for the global challenges that lie ahead in the coming decade. Part of the prospective grant will go towards commissioning ten essays and accompanying artwork for the issue.

To other funders out there, please fund independent media outlets, they are the voice of reason and authenticity in an ocean of unreliability and lies.