The City is For All stands up for the dignity of homeless people and people facing housing difficulties and fights for the right to housing in Hungary. They are a non-registered informal group, but they are fiscally hosted by a registered NGO called From the Street to Housing Association, which has charitable status. 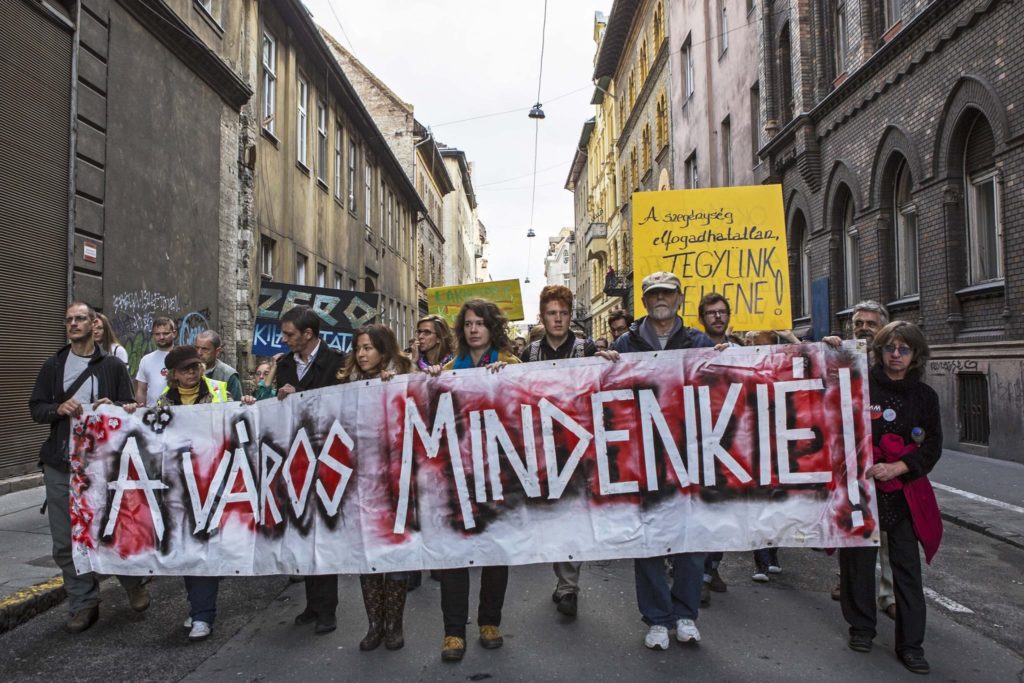 In Hungary – a country of 10 million people – around 4 million people live under the substance minimum and 1.5 million in poverty. There are around 30,000 homeless people, half of whom live in Budapest and between 800,000 & 3 million people in the country live in housing poverty.

Housing poverty is a structural problem: it is a result of low wages, a completely inadequate social safety net, the extremely unequal distribution of housing subsidies, and the almost total lack of social housing. Despite these systemic challenges, the issue of housing has never been taken seriously by any of the post-1989 governments. With the increasingly oppressive and anti-poor policies of the current government, the housing crisis has become even more severe: there are more evictions and more people living in poverty than ever before since the regime change and the government has stigmatized and criminalized both homelessness and poverty.

The mission of the City is for All is to organize a housing movement where homeless people, people living in housing poverty and middle-class allies fight together to create a just and equal Hungary where housing is a resource available to everyone. They use a variety of methods to achieve their goals including long-term campaigns for policy reform, legal aid, community organizing, nonviolent direct action and mutual support. 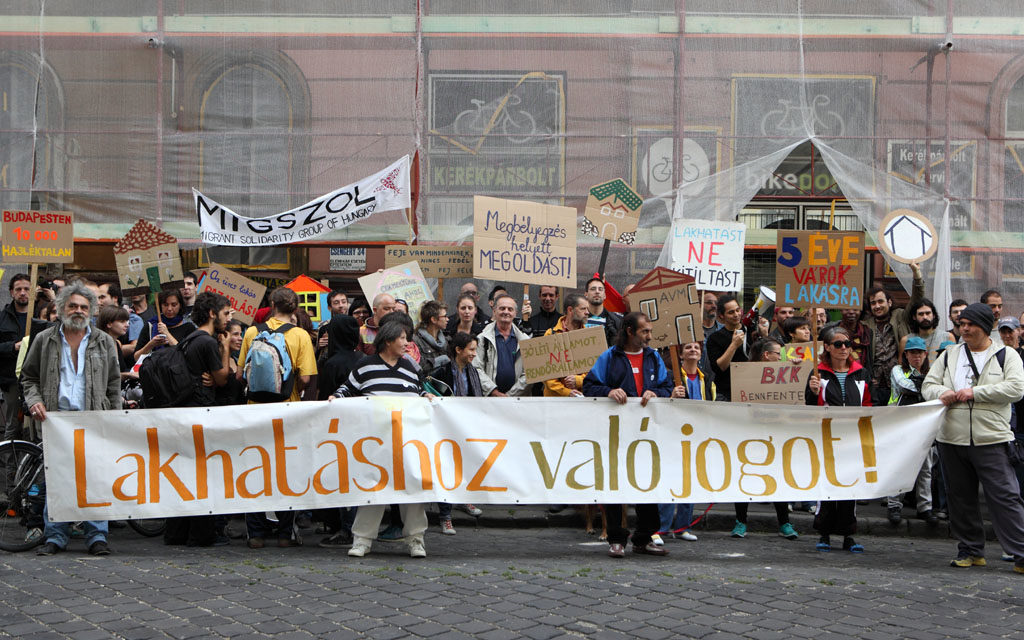 The mission of the group goes in two broad directions: on the one hand, they aim to affect real-world change by improving the concrete housing situation of people and communities, and also by more long-term work related to policy advocacy and awareness-raising. On the other hand, the mission of the group is to continuously create and sustain a politically engaged community of people affected by various forms of housing precariousness. They believe such a community is needed to go beyond client-type relations and to address housing issues in a genuinely political way. 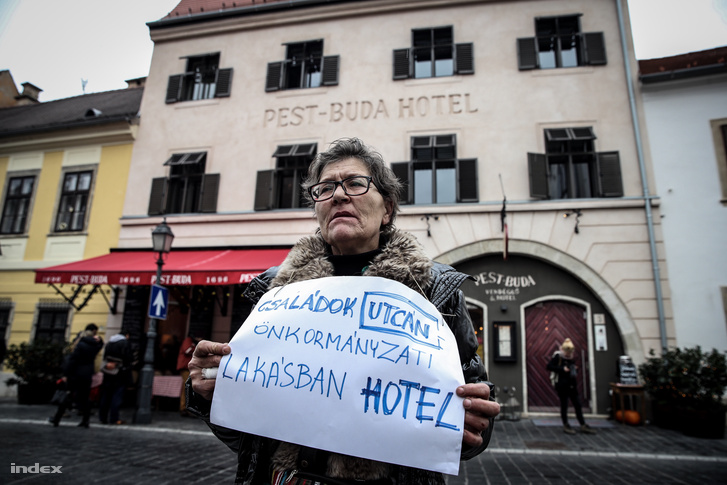 Activists demand that the local government doesnt give businesses cheap rent, but rather those who are in need of housing. The restaurant is Zsiday Royé, which has been implicated in corrupt government dealing.

At the moment ‘The City is for All’ is the only grassroots organisation in Hungary that fights for housing justice and actively mobilizes people living in homelessness and housing poverty. They have been at the core of a broader housing movement and it is largely due to their work that housing has become a prominent issue on the Hungarian political agenda. The City is For All is also a beacon of hope and inspiration for many people and organisations in Hungary (and probably abroad, too as they collaborate with numerous groups across Europe).

The City is for All was founded in 2009 by people who are deeply committed to a just and egalitarian society. Their members are currently or formerly homeless people, those experiencing housing poverty as well as their mostly middle-class allies. People affected by housing poverty play leading roles in all aspects of the organization. They’re a 100% volunteer organization with no paid staff members. They have around 50 active members, 80% of whom are either currently or formerly homeless or have experienced housing poverty. The work of the group is organized around campaigns and is managed by coordinators dedicated to different areas and topics (e.g. housing campaign, communications, donations, eviction hotline etc.). Coordinators are nominated every 6 months at the semi-annual retreat. 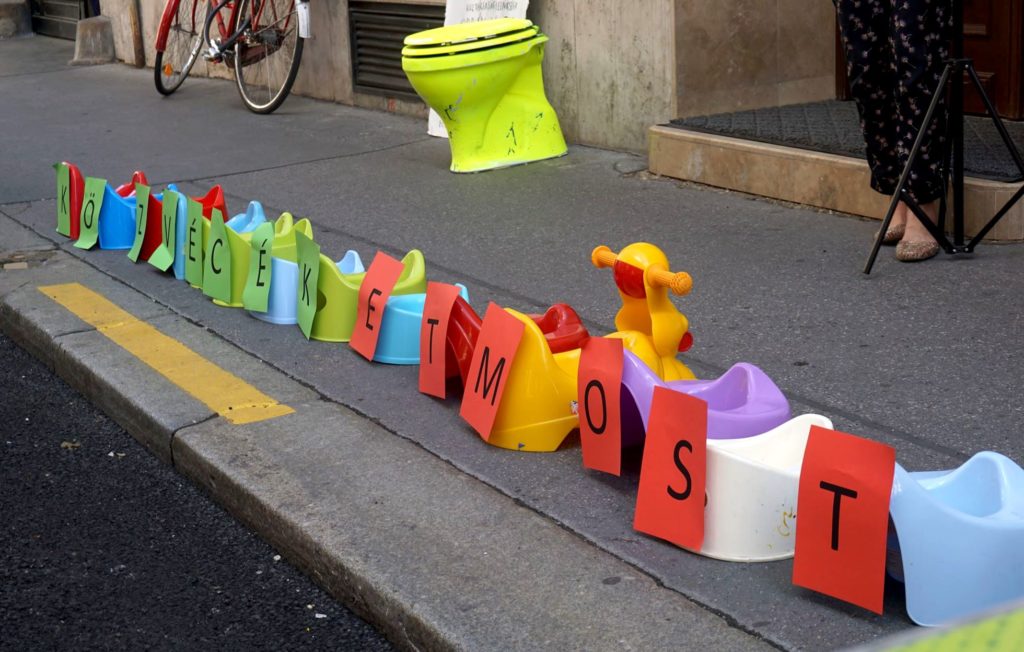 In Budapest, there are barely 80 public toilets for more than 8 million people. In addition, very few public toilets are free and accessible. The City is For All together with the public disease of the insiders (BKK), organised a joint campaign in 2017 highlighting this issue and calling for immediate government action.

The most important external obstacle to the success of The City is for All is the current government and the ruling elite that do not prioritise social justice and equality as a basic principle in society. Over the past years, the national and local governments have become even more authoritarian and exclusionary and refuse basically any and all communication with citizens’ groups and opposition voices. 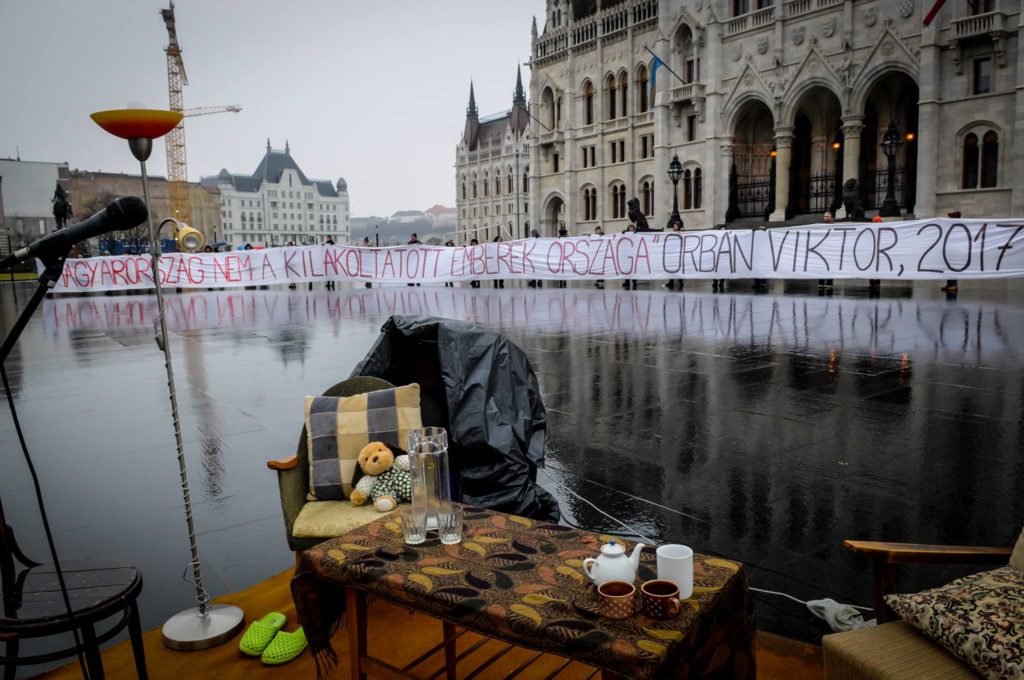 The City is For All staged an installation on February 14 in front of Parliament in Budapest, waiting for the house committee’s decision on the eviction of families with children.

In terms of internal obstacles, their biggest challenge is to recruit new members who are committed to working with them in the long run. They have a very engaged core group, but need to widen the scope of membership to be able to achieve large-scale changes. To facilitate this process, they have recently made important reforms to their recruitment strategy that makes it easier to people to connect with them, which will hope will bear fruit soon. In the meantime, with the Guerrilla grant the collective will: 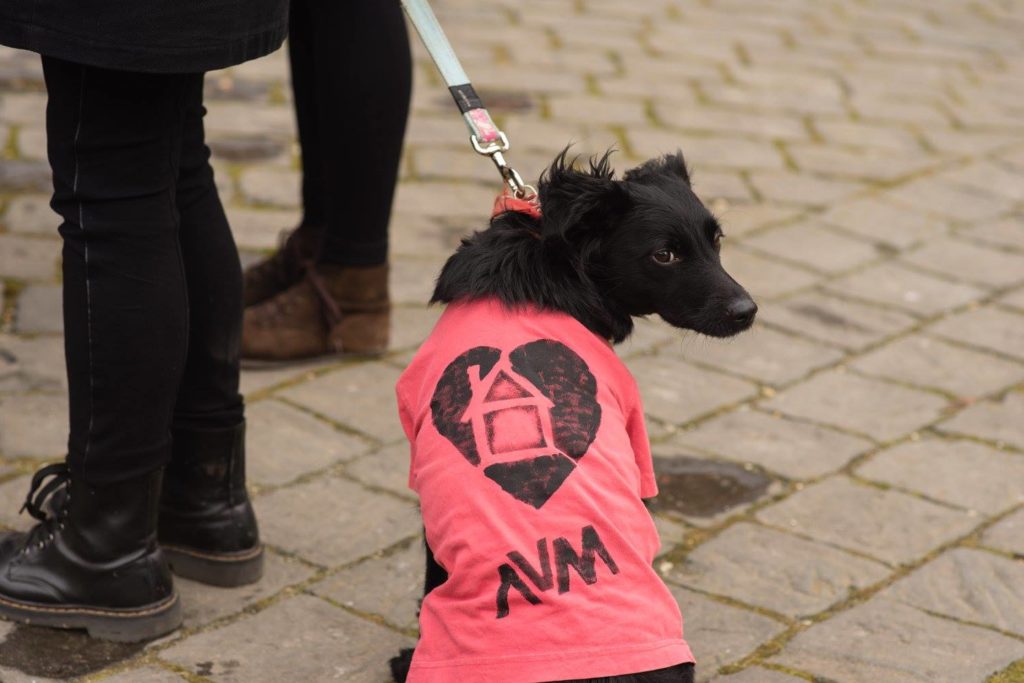 A victory! A municipal initiative that offered people who rent cheap municipal apartments in the district – especially for those who have been renting public property for five years or longer, to be able to from this year buy them at half price.