Stay Grounded is a network which aims to tackle the root causes of aviation growth and climate change and works towards an ecologically sustainable and just form of mobility. It consists of airport resistance groups across Europe (and some in the Global South), climate justice activists, some critical trade unions, scientists, NGOs, and groups supporting (night) trains as alternatives to flying. Stay Grounded, is not legally registered, instead, Mira Kapfinger and Magdalena Heuwieser coordinate the Stay Grounded network and its campaign which is made possible through part-time employment at the small Vienna-based NGO, Finance & Trade Watch. 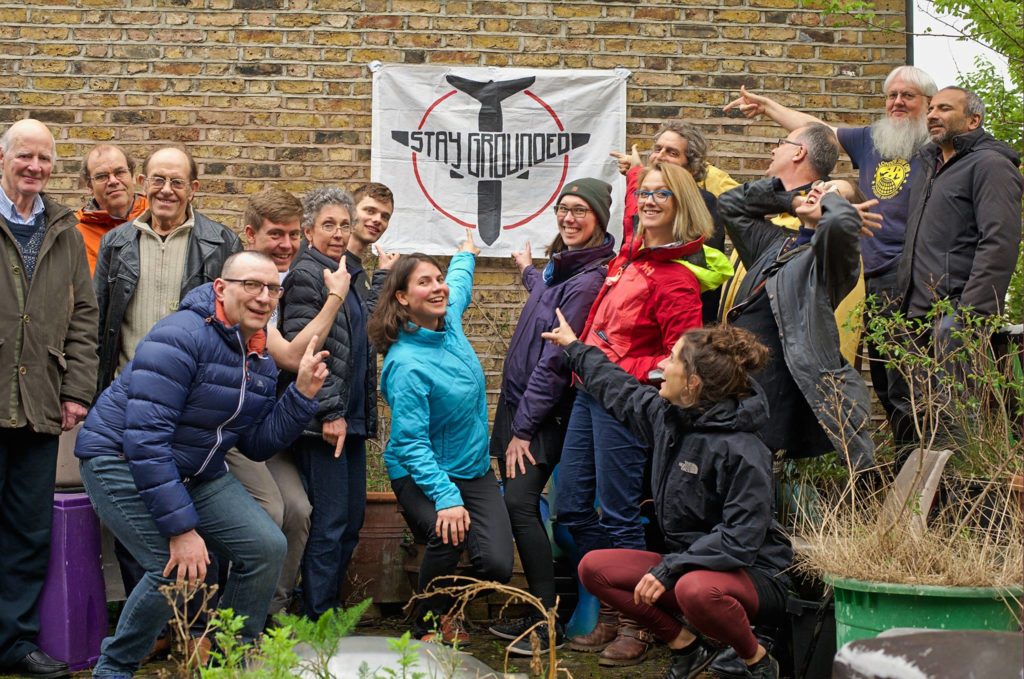 Aviation is the mode of transport with the biggest climate impact. If it was a country, aviation would be one of the top 10 emitters. Emissions from flights are one of the fastest growing sources and may reach a share of 22% of global emissions by the middle of the century. Such rapid growth rates need new infrastructure: 550 new airports or runways are planned or being built around the world (86 in Europe alone), involving land grabbing, the destruction of ecosystems and local pollution (noise/traffic/particles/etc).

At the turn of the millennium, less than 5% of the world’s population had ever sat in an aircraft. This mode of transport is a privilege for the few at the expense of the many, namely those in the Global South who are already bearing the brunt of the impacts of the climate crisis and future generations who will have to deal with the social and ecological consequences of worsening climate change. 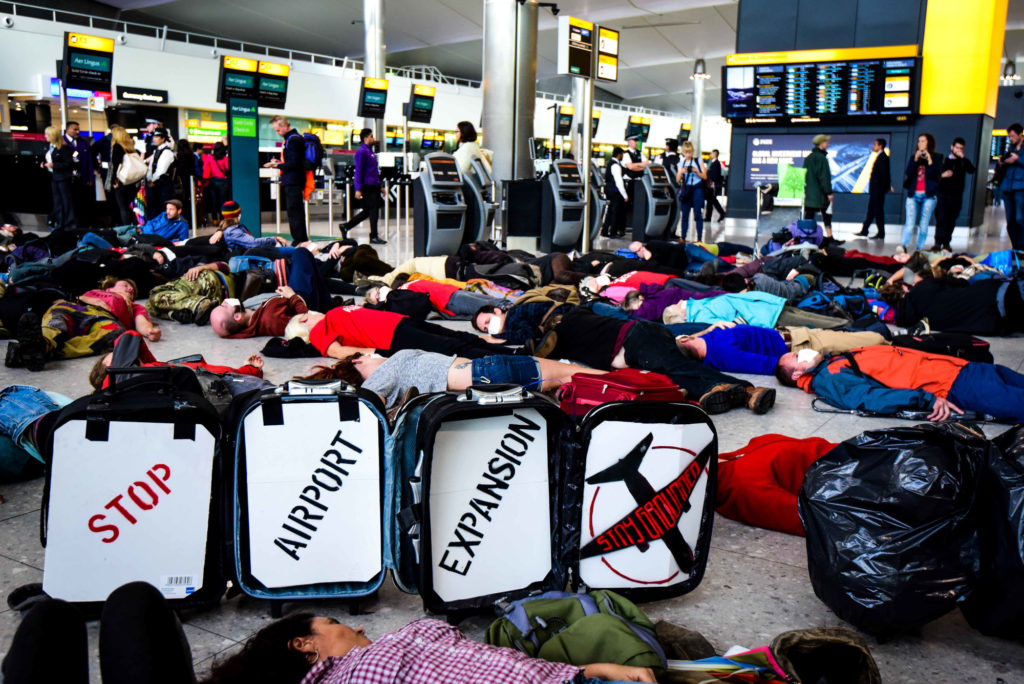 Still, aviation has become commonplace for the European middle and upper class, even though just a few years ago, most Europeans would take night trains or never consider weekend trips to far off destinations. The root causes of aviation growth don’t lie in “bad” individual behavior, but are rather a byproduct of the growth imperative of capitalist systems, coupled by artificially low prices that don’t reflect the real cost of flying, the power of the aviation industry and its support from governments in the form of massive subsidies. Simultaneously, there is an assault on alternative sustainable modes of transport, namely trains. The reduction of night train connections, the increasingly complex booking process of European cross-border trains, and privatization of national train operators has resulted in many choosing planes over trains, thereby exacerbating the trend towards aviation.

In addition, people are confronted more and more with a greenwashed image of aviation. The industry upholds promises of aviation’s “carbon neutral growth”, foments the belief in future technical solutions which remain illusions, and wants to replace more and more fossil kerosene with dangerous biofuels. Additionally it claims that aviation does not need to reduce its own emissions, but that it is sufficient to offset them: From 2020 onwards, the aviation sector will become the largest buyer of carbon offset credits via the new climate strategy CORSIA (Carbon Offsetting and Reduction Scheme of International Aviation). 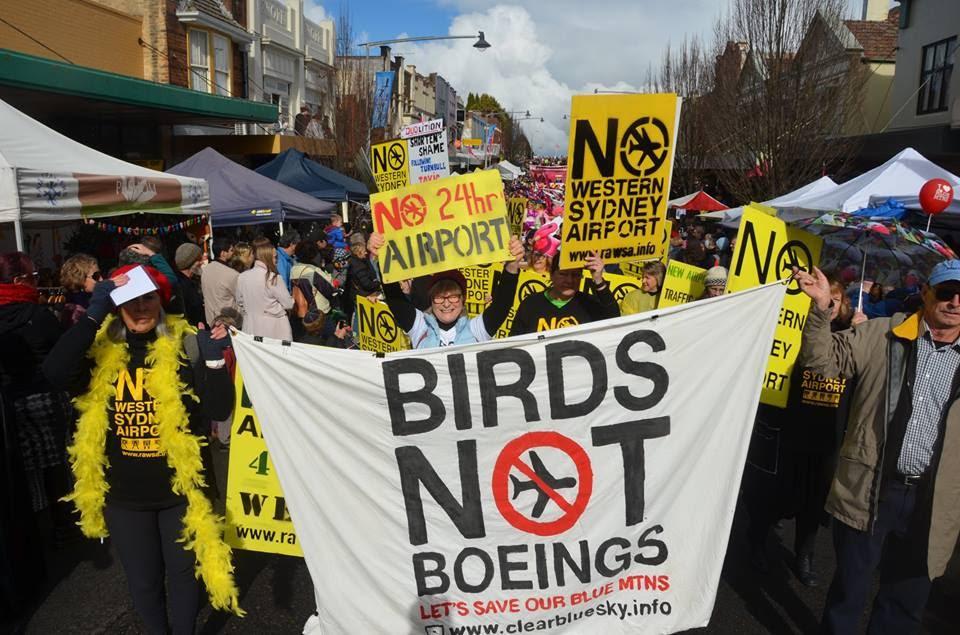 The vision of Stay Grounded is a form of mobility that rests inside the planetary boundaries and is not at the expense of others. This includes several modalities, like reducing car traffic and promoting shared or public transport for all. At the same time, it is essential that air traffic doesn‘t grow any more and is being substituted wherever possible through alternatives like night trains, environmentally friendly ships, or online conferences. The construction of new airports or airport expansions should be limited to a minimum, taking care that the remaining projects are implemented in democratic and just ways and that ecosystems are not harmed. This mobility shift goes along with a social-ecological transformation of our economy and society as a whole. 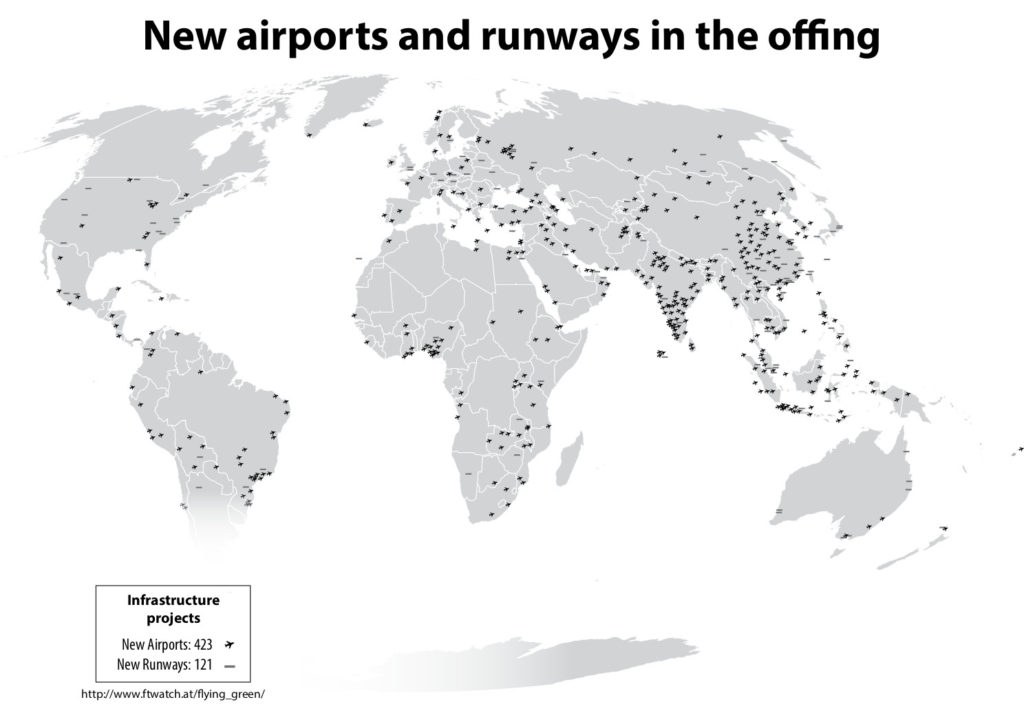 Our funding as well as grants from Dreikönigsaktion and Patagonia Foundation, as well as other pending grants will go towards some of the important activities the Stay Grounded crew are cooking up.

Network Meetings:  Planning of two international (mostly European) network meetings this year. The spring meeting takes place April 28-29th in London and will focus on the discussion of the position paper, the planning of the coordinated actions, and have sessions on just transition, money flows and finances in the aviation industry, and skill sharing for anti-airport activists. The autumn meeting will be held either in Vienna, Frankfurt, or, if a civil society summit will be organized alongside the COP24, in Katowice/Poland. This meeting will focus on reflecting the past activities in the campaign, as well as planning the activities of next year. At each meeting 30-60 people are expected. The in-person meeting will also allow for online participation, since it is important that no one flies to the meeting in order to be coherent. 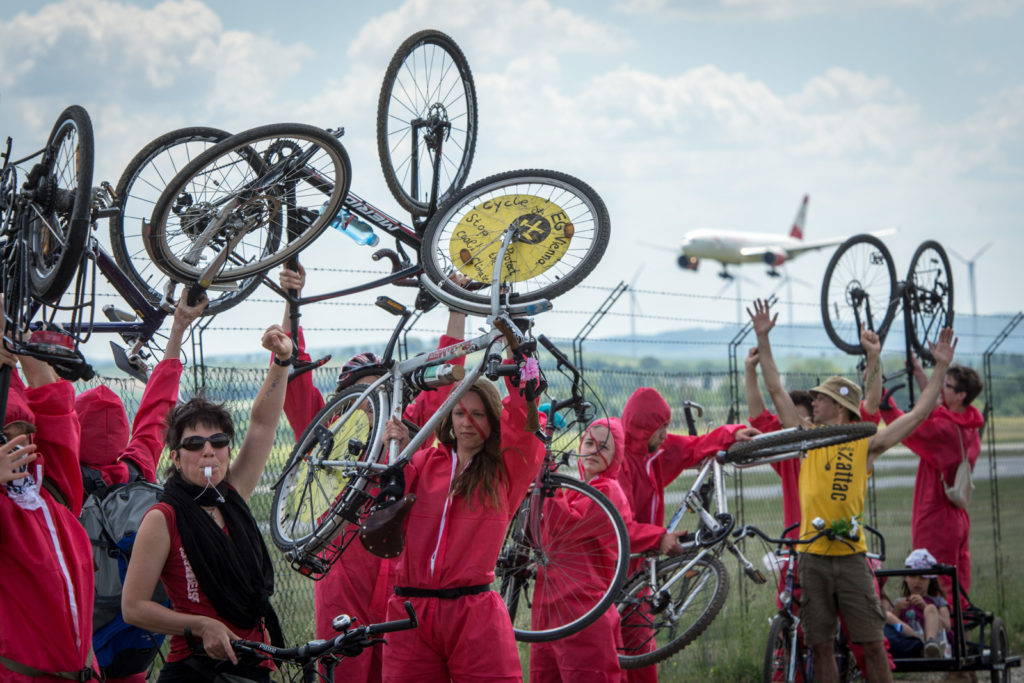 Position Paper: It is important to define what Stay Grounded stands for, to bring radical perspectives into the debate on aviation and change the public discourse, to grow stronger, and to put pressure on big civil society organisations to position themselves against aviation growth and false solutions. To achieve this, they will create a position paper presenting 12 steps for such a systemic change. After asking for signatures they’ll launch it in autumn before the climate summit COP24, combined with the below measures, in order to get the most public attention possible.

Coordinated Actions at Airports: This autumn, groups involved in Stay Grounded will organize local actions (like demonstrations, flash mobs, red line actions etc.) in order to protest against new airports or airport expansions. By coordinating and communicating them together this can draw attention to the huge number of infrastructure projects and conflicts involved (like land grabbing, biodiversity loss, noise, and of course climate change). Media campaigns on both the local and the international level will involve contacting journalists, sending out press releases, and spreading a video clip on social media. This can direct international attention to local problems, can help to connect such local issues with the more systemic dimension, and provide an entry-point to the public discourse with our critical position (paper).
What‘s more, real links between different airports can be encountered. One example is Fraport (Frankfurt airport), that doesn‘t only plan its own expansion, but also recently bought the airport in Porto Alegre, which its expansion threatens displacement of poor Favela inhabitants. Fraport also invests in a disastrous aerotropolis (mega airport) in Istanbul. They have contacts to resistence groups in all those cities, so coordinated actions can help to build pressure on Fraport. 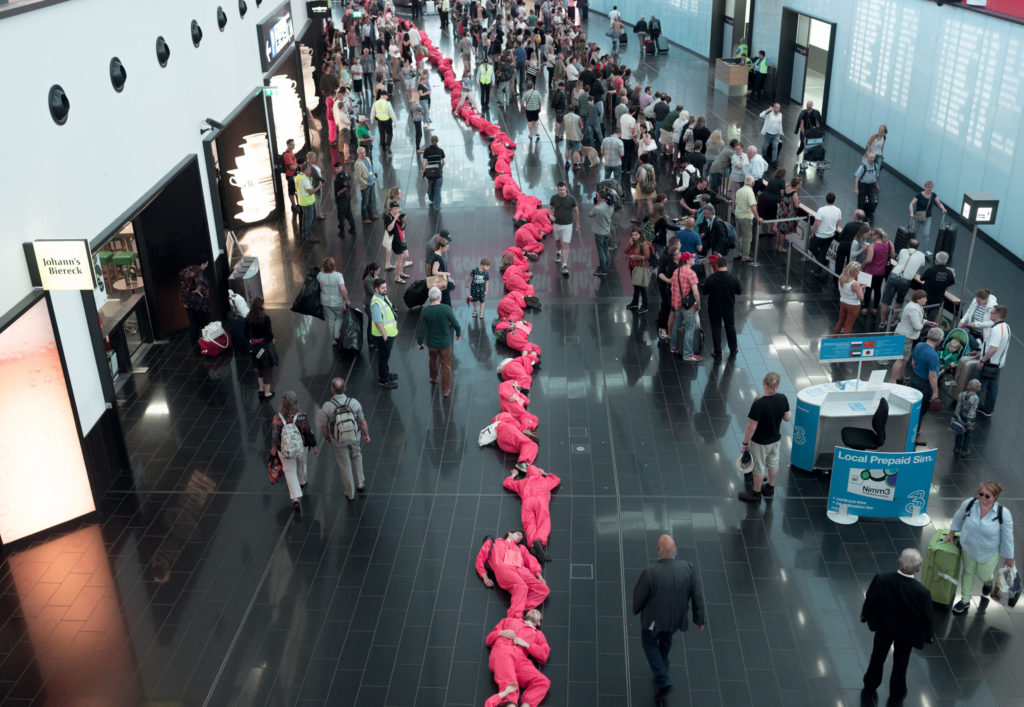 Mapping of Airport Struggles: They plan to show the immense number of conflicts connected to growth of aviation via an online map. For this, they will gather more information on many of the planned airport projects, their financing, the involved conflicts (land grabbing etc.) and resisting groups. GAAM (Global Anti-Aerotropolis Movement) will take a lead on this with the help of the whole network and in collaboration with the Environmental Justice Atlas (EJatlas.org). The EJ Atlas is an online map that has already gathered and mapped 2400 environmental conflicts around the world. The EJ Atlas is a teaching, networking and advocacy resource. Strategists, activist organizers, scholars, and teachers find many uses for the database, as well as citizens wanting to learn more about the often invisible conflicts taking place. Until now, almost no airport conflicts had been mapped, so under the lead of GAAM and EJ Altas, they will work to include information on at least 30 projects by the end of this year. This also involves being in contact with local resistance groups and connecting these between each other. At the EJ Atlas, a new layer will be created for the category airports, and also embedded into the Stay Grounded website. 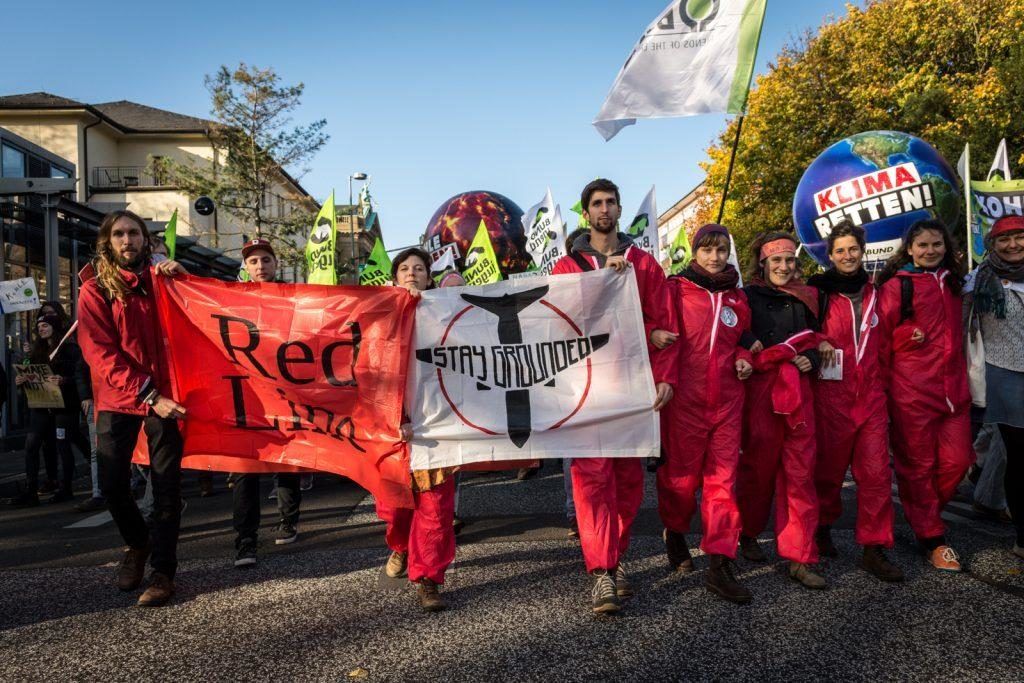 Spreading the Study “The Illusion of Green Flying”: This brochure has been published in English and German by Finance & Trade Watch last year, in collaboration with different people from Stay Grounded. It has received lots of attention. Local groups in France and in Turkey have asked them if they could publish French and Turkish versions of the study, so they are planning the translation, new layout and printing of those brochures. In case there is more demand from Spain or Latin America, they might also do a Spanish translation.

Working on our long-term funding mission, Stay Grounded was the ideal candidate for further structural support in 2019 so that they can build on the accomplishments and content produced in 2018. 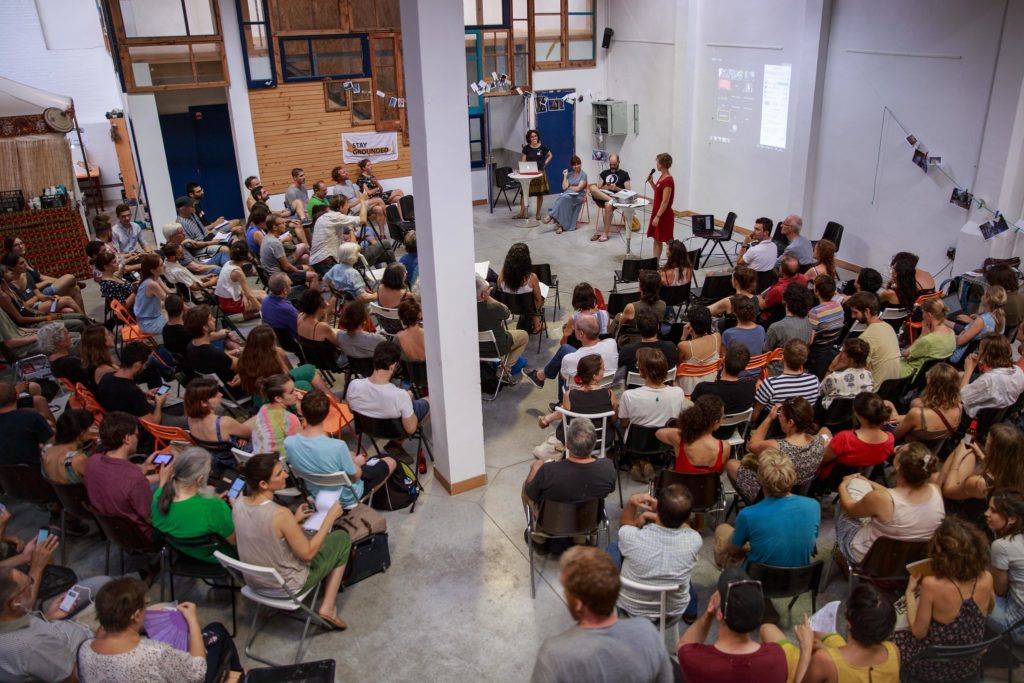 Opening Session: Connecting the Movements Looking at the topic of mass tourism from the perspective of various local movements from Barcelona as well as activists from the Global South.

This summer, they organised a conference Degrowth of Aviation which will initiate a widespread public debate on the needed measures and policy instruments to reduce air travel. The conference outcomes will fuel a joint campaign in the coming years for the Stay Grounded network and the members who want to participate actively. 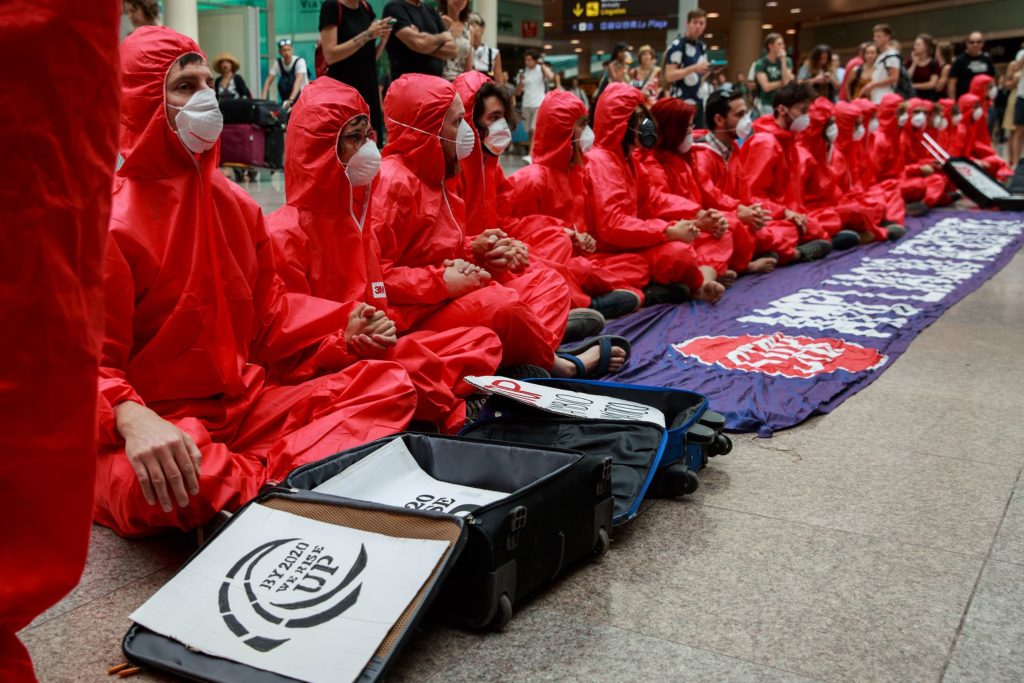 A menu of central resources and campaign support will be developed (brochure, stickers, flyers, videos etc.), which can be used by their members in their local work. In addition they will organise two network meetings and help with the organisation of regional meetings in Europe. Stay Grounded will support direct actions of their European member groups with advice, resources and media outreach, and will collaborate with the climate justice campaign “By 2020 we rise up”. 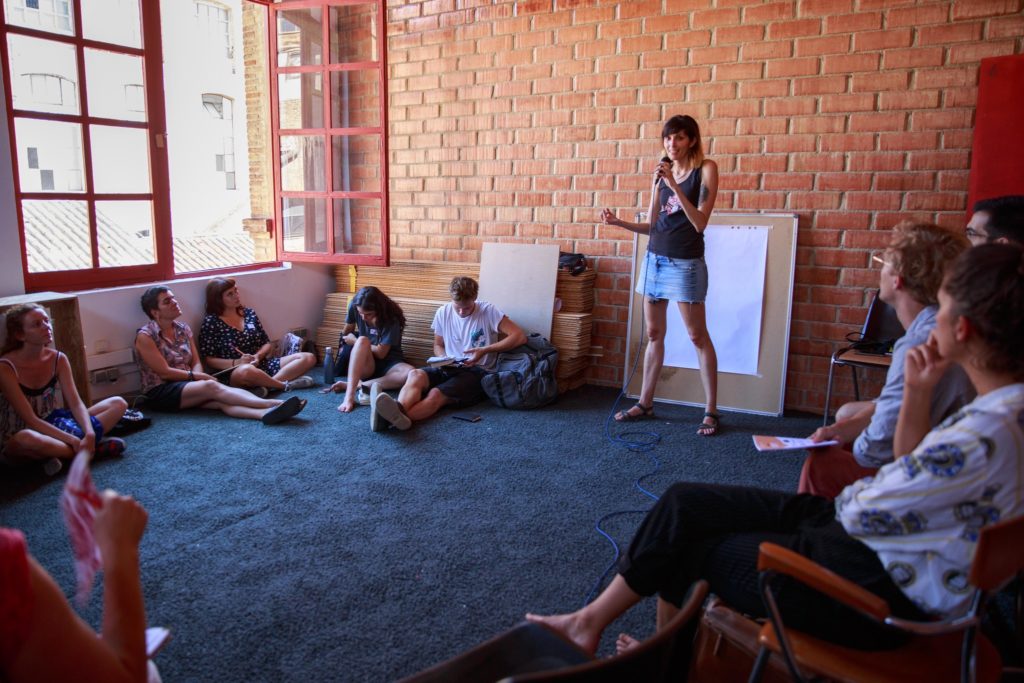 This means being part of a Europe-wide campaign and movement which connects several struggles for climate justice and which utilizes mass direct actions at fossil infrastructure. They want to make sure that degrowth of aviation will not be neglected as a cause within the climate justice movement. A particular short-term focus is to improve their outreach toolkit (press work, social media, educational work, being present at conferences/meetings, gain more members etc.) and foster national and EU petitions on necessary policy or behaviour changes by sharing them among the network and doing publicity. Last but not least, they plan to develop a strategy for donor fundraising in order to be able to cover higher costs and be more resilient, so they need support donors 🙂 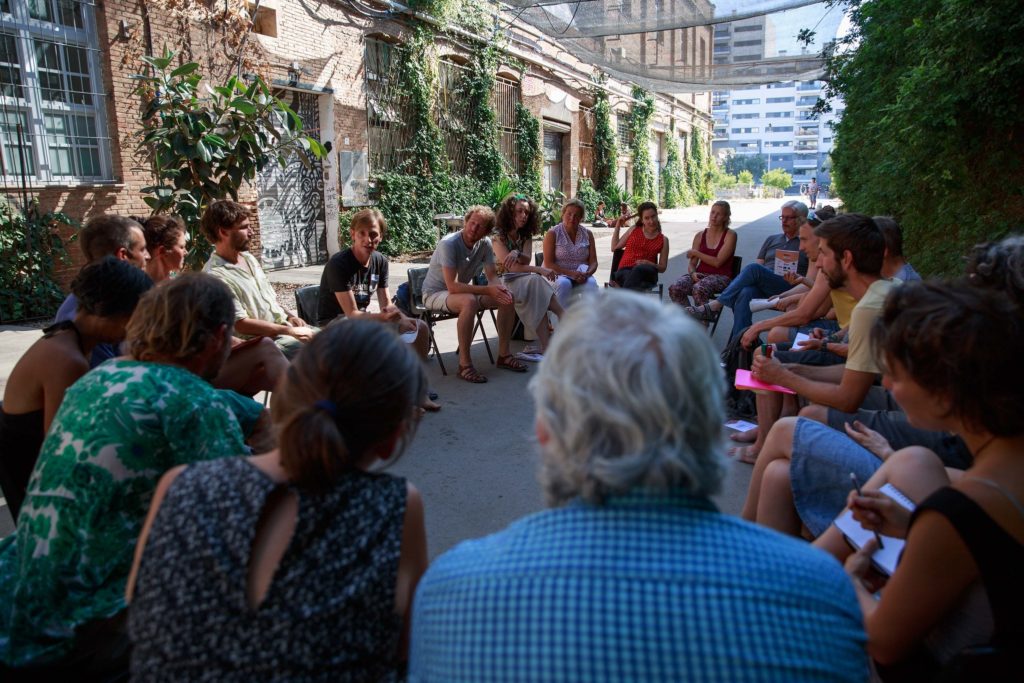