Plan B is a network of volunteers pursuing a rational, evidence based response to the climate crisis through strategic legal action.  More specifically, Plan B revolves around a group of 11 concerned citizens aged between 9 and 79 who are taking the UK to court over their lack of action on climate change, and a wide network of people are supporting this mission on the intersection of activism, litigation & quixotic questing. 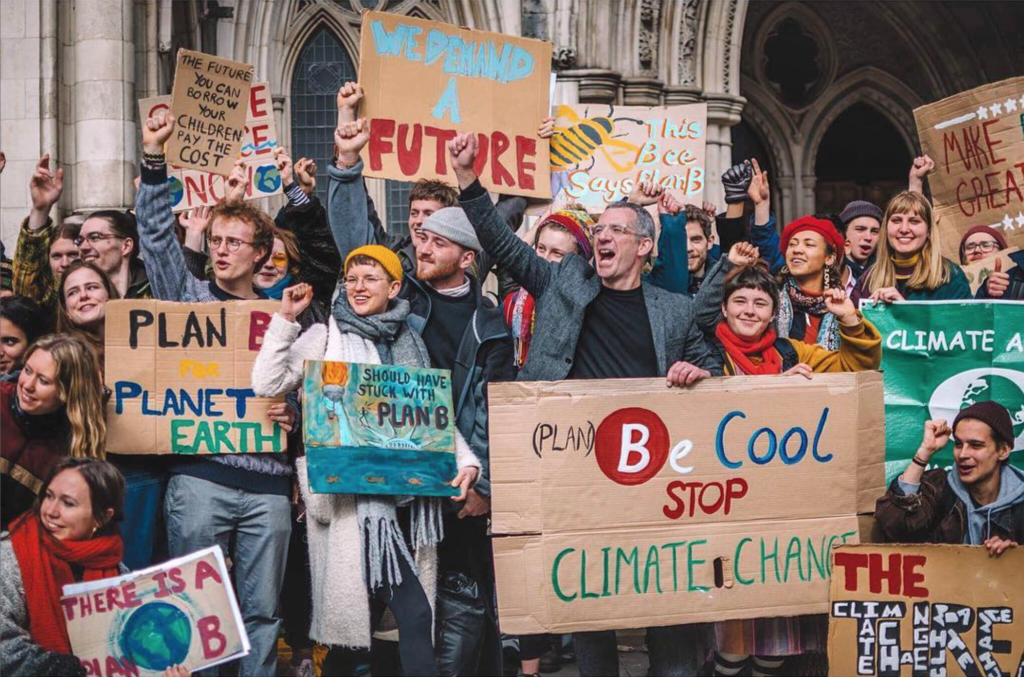 Climate change is global in scale, and the solution must be global. Plan A was for the governments of the world to agree burden-sharing arrangements for keeping the world within the ‘global carbon budget’ consistent with avoiding the worst impacts of climate change (as they has succeeded in doing in addressing the threat from depletion of the ozone layer). More than a quarter of a century after the signing of the UN Framework Convention on Climate Change (UNFCCC) it is clear that Plan A is not working. Global emissions of greenhouse gases in 2017 were at an all time high. President Trump’s stance on the Paris Agreement only underscores the inability of the international political process to address this existential threat.

The challenge is substantial. Our economies are still largely underpinned by fossil fuels, and fossil fuel companies retain immense political influence and economic power. They have succeeded in confusing the public with misinformation campaigns, inducing public and political inertia. Meanwhile animal-based agriculture (and other factors) are causing deforestation on a vast scale, removing essential carbon sinks. While governments broadly agree on what needs to be done, there is no agreement on the division of responsibility, and no effective mechanism under the Paris Agreement for holding Parties to account. This ‘accountability gap’ must be closed and closed urgently. 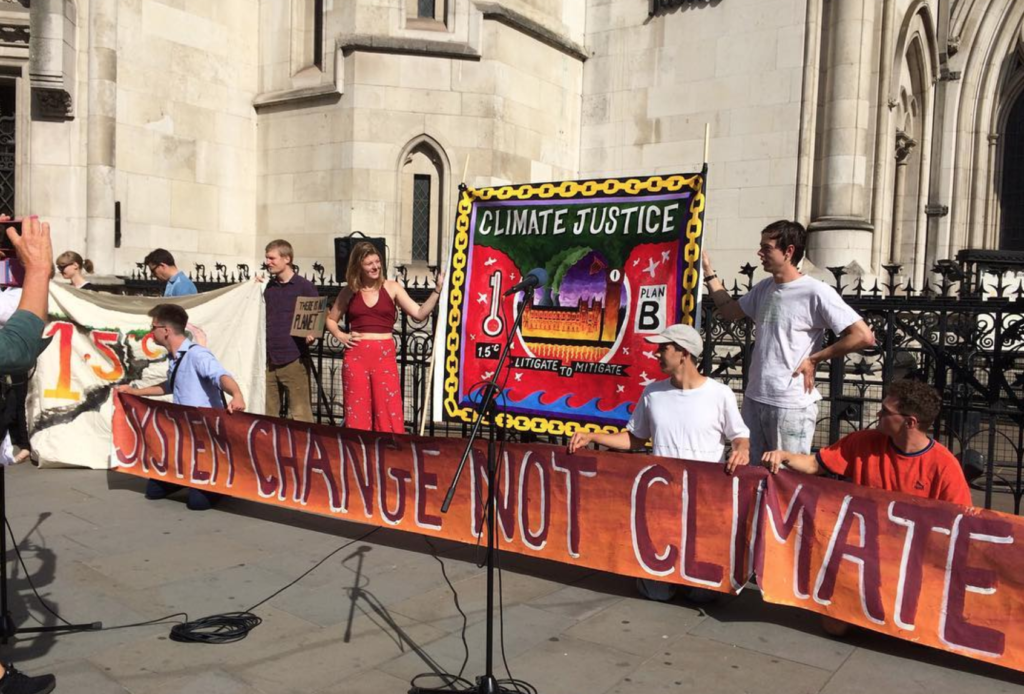 ‘Plan B’ is to advance a grassroots, broad-based political movement using strategic legal-action to hold governments and corporates to account for their climate change inaction. In the 2 years since Plan B came into existence the movement has snow-balled. Citizens are bringing actions against Governments from the USA to Uganda, Ireland to Colombia, and the UK to India; while the Mayor of New York City, Bill de Blasio, is suing major oil companies for the costs of safety-guarding the city from climate-induced flooding.

In the last 2 years Plan B has developed an innovative and sustainable low cost model of working, a network of expert volunteers which has proved immensely productive, since in a mere couple of years they have:

*commenced a globally significant legal action against the UK Government
*published a peer-reviewed analytical framework for the accountability of all countries for the Paris Agreement temperature goal.
*developed and published a website of legal and analytical resources visited nearly 50,000 times last year
*presented to the UNFCCC, UNEP and the Commonwealth Secretariat
*made a major contribution to the investigation of the Philippines Human Rights Commission
*developed collaborative working arrangements with organisations such as Greenpeace International, Avaaz and Friends of the Earth
*raised awareness of climate litigation through articles published by the BBC, the Guardian, Vice, Slate Magazine and others
*helped to established the Climate Action Movement of students in the UK

Our support is going to be channeled entirely into the Plan B approach, litigation as activism, in other words covering legal fees to continue their flagship action which is the main court case itself.  Legal action is costly, so in order to continue the charges against the UK Government, the movement needs all the funding support they can get. Costs are not entirely predictable and they have already exceeded the original estimate. In addition, they have to provide against a potential costs liability if they lose, i.e. more money is needed if they don’t win. They have crowdfunded so far, received ad hoc individual donations and Plan B leader Tim Crosland is personally investing in this initiative – to such a degree that one cannot help but be humbled and inspired by how much one person is sticking out their neck & pouring sweat, blood and tears, so disproportionately to the rest of us, while we’re all in the same boat (which is of course a gross generalisation, since marginalised communities, especially in the global south are due to bear much larger a burden of climate change than Europeans for instance). 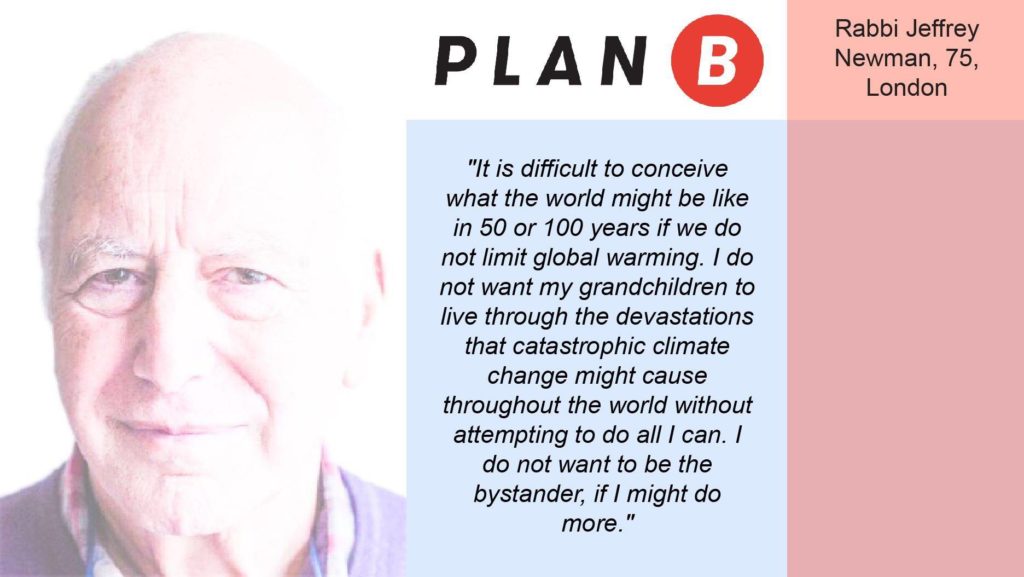 Following a stellar first collaboration in 2o18, Plan B came to us the following year with a very different kind of proposal shifting from legal activism to art activism. Over 2 days, 13-14 July 2019, their team along with an eclectic set of partners performed at the Tate Modern, one of Europe’s leading venues for modern art: “All Rise for the Planet: a 2030 Show Trial“.

The poster reads: “Projecting forward to the year 2030, when climate breakdown is upon us, we will explore the complicity of governments, corporations, the media and citizens, insight of what they knew in 2019.”

Part-theatre, part-art installation, part-people’s court, this creative event about climate justice and accountability will present testimonies, along with visuals and video installations, bringing this trial to life in an immersive fashion. Overseen by a judge, it will then be up to the jury, which is the audience, to decide whether each party is guilty or not.

The performance was live-streamed, so as to engage as many people around the world as possible.

And if you’re in the reading mood, there’s a terrific interview with Tim Crosland to be found here.