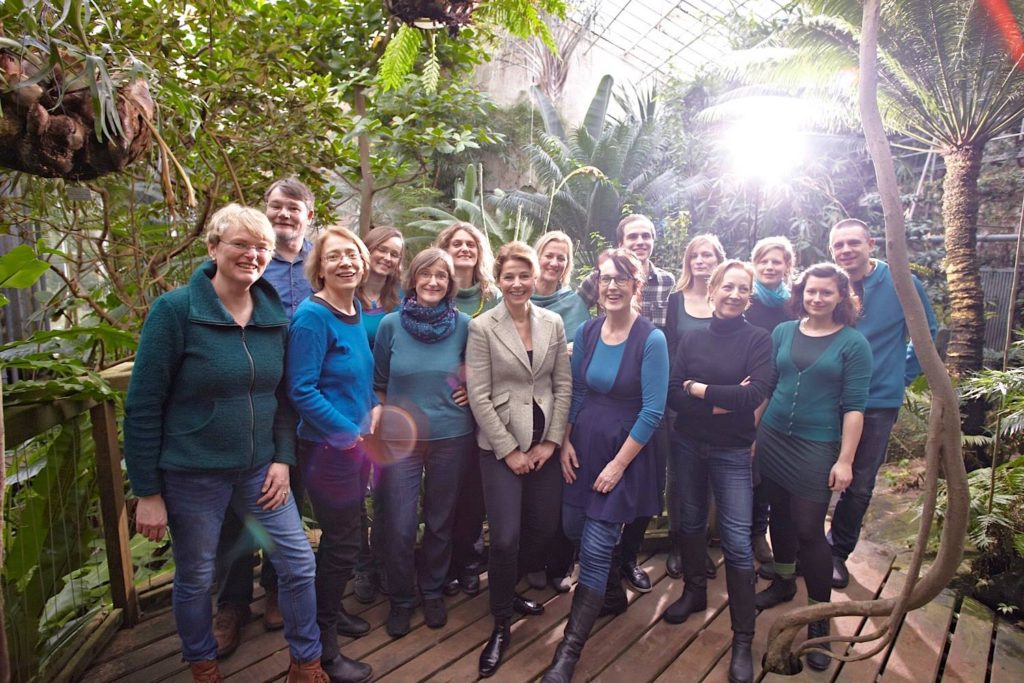 The jolly Urgewald team in their natural habitat

Urgewald is a non-profit, environmental & human rights organisation with 25 years of experience in addressing the underlying causes of global environmental destruction and poverty. They monitor the activities of German companies & banks abroad and educate the German public about the negative impacts of consumption patterns on people and nature both near and far.
Urgewald works closely with affected communities and NGOs in the global South. Over the years, they have become an important contact point for anti-nuclear campaigners in Eastern Europe, and indigenous peoples in Brazil, whose cultures are threatened by dam projects or farmers in India, who are being driven off their lands for mining. They make sure these voices are heard – in meetings with decision-makers, at shareholder meetings, in the media or through public actions. It is not easy to make divestment from coal sexy, so they simply make it necessary.

Urgewald names those responsible for destruction and calls on decision-makers to put into practice promises of sustainability that are made in annual reports and public statements. They call on international companies and banks to step back from destructive projects and to adopt binding environmental and social standards. And they engage in dialogue with business representatives to help them develop responsible due diligence practices. After 25 years of “following the money”, Urgewald is unique in Germany with its clear focus on and experience in, the finance sector and how it underpins global development. They have a notable track record, such as the exclusion of state guarantees for nuclear exports, exclusion of coal financing by World Bank, European Investment Bank and partly European Bank for Reconstruction and Development and KfW, major coal divestment of the Norwegian Pension Fund & Allianz, as well as exclusion for financing of companies producing cluster ammunition by several German banks.

They now use those successes as leverage in order to sustain pressure on financiers/insurers to improve further. Internationally, they are one of the leading organisations to develop campaigning strategies against the financing of expansion plans of the coal industry together with partners.
Urgewald´s approach is unique in addressing the importance of preventing financial flows into expansion plans of the coal industry: It is not only about divesting, it is about avoiding future investments. With the Global Coal Exit List (GCEL) Urgewald put together a tool that can bring about effective divestment (divestment with material impact). When used correctly and spread widely, the GCEL can help reaching the Paris Climate Agreement and limiting global warming to 1.5 degrees.
Investors following Urgewald´s approach can be real climate role-models.

Currently, Urgewald has a core team of 17 staff members, 9 of whom are working full-time and 8 part-time, 14 are women, 3 are men – ergo fempower in practice. The majority of staff are working on coal, while the rest of the ream tackles financial institutions  (World Bank, ADB, AIIB etc.), consumer campaigns and different issues like bank financing of defence industry, the German public bank KfW, EIB, EBRD and export credit agencies. Most of their staff members have been working for the organisation for 10 years or longer, leading to a very knowledgable and experienced team. Additionally they have a base of 500 to 800 people who help them with protest activities, collect signatures or transfer voting rights to Urgewald for the annual general shareholder meetings. Some of these volunteer activists are organising local events, to which they invite Urgewald members as speakers.

Urgewald works in networks with organisations that do similar work as them in other countries. The networks are for example on private banks, or public banks, or anti-coal, anti-nuclear, dams. Participating organisations share information, successes, questions, approaches etc. amongst each other and discuss strategies. This helps members to amplify their leverage by using swarm intelligence as well as good or bad experiences and successes in a given country to approach decision-makers, banks, insurers in other countries or with other institutions. Pointing to positive developments in other countries or at their competitors can create pressure and incentives for the institutions to move ahead. 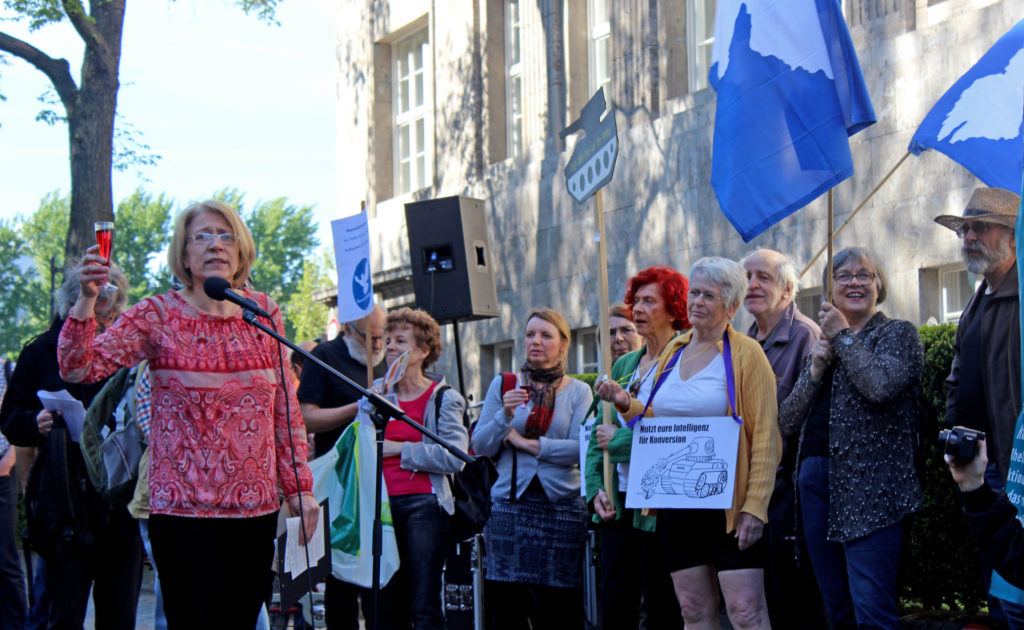 A protest/awareness raising event around arms funding around the world. Sometimes old-school mobilisation efforts are the gold standard.

Urgewald wants to prevent banks and investors from financing companies that have far reaching plans to build new coal plants worldwide. A key part of this project is therefore the publication of a list of the top 150 coal plant developers, which represent 80% of the new build pipeline (plans for over 1500 coal plant blocks worldwide). This list (to be published by end of June) will be a powerful tool for divestment campaigners worldwide as it identifies the companies that banks and investors need to avoid if they are committed to keeping global warming well below 2°C.
With the list they want to target the top European banks most involved in financing the pipeline of new coal plants. The objective is to move banks to establish policies that effectively exclude financing of companies that are still expanding their fleet of coal-fired power stations. They also seek to push insurers to stop underwriting coal companies as another important aspect of how the coal sector is being kept alive.

Therefore, the Guerrilla grant will be going toward the research, publication and promotion of the Global Coal Exit List as well as the public pressure campaigns. Depending on the reaction of banks/insurers to the first interventions, they will also develop tailor-made public campaigns on individual banks and insurers including e-mail petitions and actions alerting bank customers to the climate impacts of their bank’s investments. Their experience from past campaigns shows that commercial banks and insurers are susceptible to reputational risks and are often willing to adopt new standards when threatened with a sustained public campaign.

The main deliverables of this project are:

While the coal industry is under great economic and legitimacy pressure worldwide, it is still not dead and will need much more efforts to be finished. It is therefore very important to keep up the pressure.  While there are welcome decisions by pension funds and insurers and many others to divest from coal companies, the focus of the divestment movement has been on “keeping coal in the ground”. Unfortunately, this means that the “Carbon Underground List” (on which most divestment actions are based) focuses almost exclusively on coal miners. To be effective, however, divestment actions must also include coal-based utilities, especially those who are actively expanding their coal plant fleet. There are currently still over 1,500 new coal-fired power station blocks in the pipeline worldwide (this is 4 times the size of the US’s current fleet of coal power plants). In view of the fact that emissions from existing coal plants are already 150% higher than admissible if we want to limit global warming to 2°C, it is imperative that we prevent banks and investors from financing this glut of new coal-fired infrastructure. 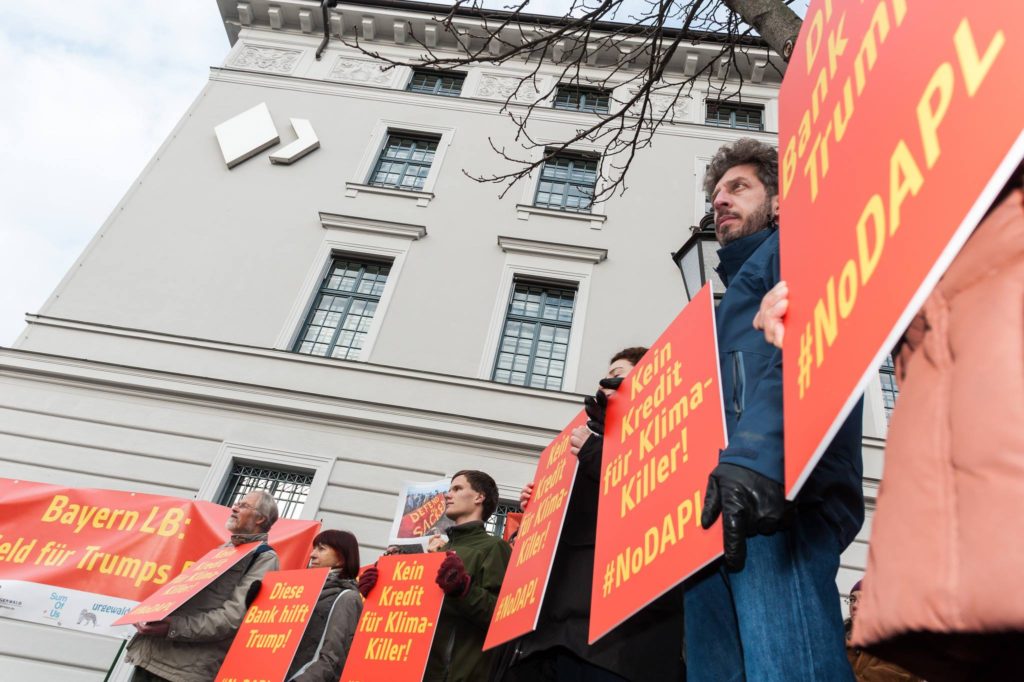