A Bit About Extractivism

Yes to Life, No to Mining is a global solidarity network of and for communities organisations and networks that have decided to resist unwanted mining projects and pursue life-sustaining alternatives to extractivism.

The network seeks to tackle the variety of social, ecological and economic issues arising from the expansion of mining projects around the planet- especially hard rock and metal mining. These include the destruction of ecological and cultural systems and sustainable livelihoods, intimidation and killings of earth defenders and economic dependency on the destruction of nature from local to national and regional levels. These impacts are invariably heavily gendered and impact already-vulnerable communities and persons most of all.

These impacts are the hallmarks of extractivism- a ‘development’ model predicated on the mass exploitation of natural wealth, such as minerals and metals, palm oil, industrial timber (mainly for export), and human labour. At present, extractivism is a systemic feature of our dominant economic model. It is sustained by global imbalances of economic and political power between North and South, and along more subtle intra-regional lines, as well as the unsustainable consumption of rich nations, global elites and our economic addiction to (GDP) growth. 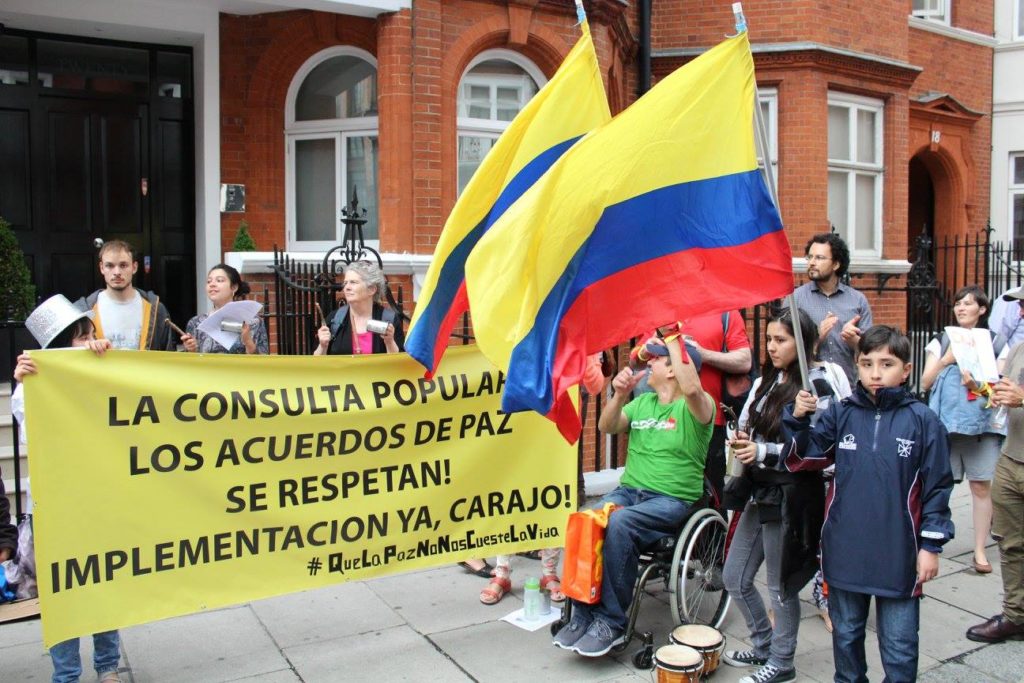 As part of the first global carnival march in defence of land, water and life, people gather outside the Colombian Embassy in London to show their solidarity with Colombian communities fighting to keep their territories free of mining.

At a deeper level still, extractivism stems from a dominant cultural paradigm, with roots in the European enlightenment and Victorian social evolutionism, that is human-centred, regarding nature as a collection of inert matter to be exploited, and anti-diversity. This mindset is also characterised by aggressive progressivism or ‘developmentality’. This facilitates the othering of peoples living culturally different or ‘pre-modern’ lifestyles, often using racist and heavily gendered stereotyping, to justify the domination of these peoples to achieve ‘progress’.

In the coming decades, hard rock mining is likely to expand rapidly and become more globally distributed if we pursue a business-as-usual path to fuel the transition from an economy founded on fossil fuels, to one reliant on minerals and metals. This expansion will likely be associated with the expansion of social conflict, ecological destruction, pollution and poverty. At the same time, it is awakening new social activism and an awareness, in nations from Spain to Colombia, that to achieve climate justice and systems change, we must address the problem of extractivism. This is a major opportunity.

YLNM delivered a letter from the Mayor of Cotacachi (Intag, Ecuador) to BHP, which has 5 concessions in the region. The people of Intag have successfully fought off a number of attempts to mine copper from their hyper-biodiverse cloudforest home. The letter politely but firmly tells BHP that it is unwanted and should leave.

A Bit About the Network

The Yes to Life, No to Mining Network (YLNM) exists to connect, network and build solidarity, shared knowledge and campaigns between communities resisting unwanted extractive projects, advance and popularise alternatives to extractivism. YLNM connects over 60 member groups and communities from Asia, Latin America, North America, Europe, the Pacific, the Arctic and Africa. As a global network partially constituted of other, regional networks, our actual membership numbers into the hundreds and is in the process of being mapped.

YLNM’s day-to-day activities respond to the reactive solidarity and accompaniment needs of communities resisting mining. Tuned in to regional struggles through the network’s regional coordinations, YLNM amplifies calls for urgent solidarity support to a global network of allies. Where such initiatives are needed, but not forthcoming, YLNM steps into the gap to organise solidarity campaigns and bring international pressure to bear to protect human rights defenders; to support member groups to access urgent funding, and to access expert advice and technical support. Evidence shows that better-connected, well informed communities have a greater chance of stopping unwanted projects, so YLNM also invests time in connecting communities and initiatives across geographies directly to exchange knowledge. 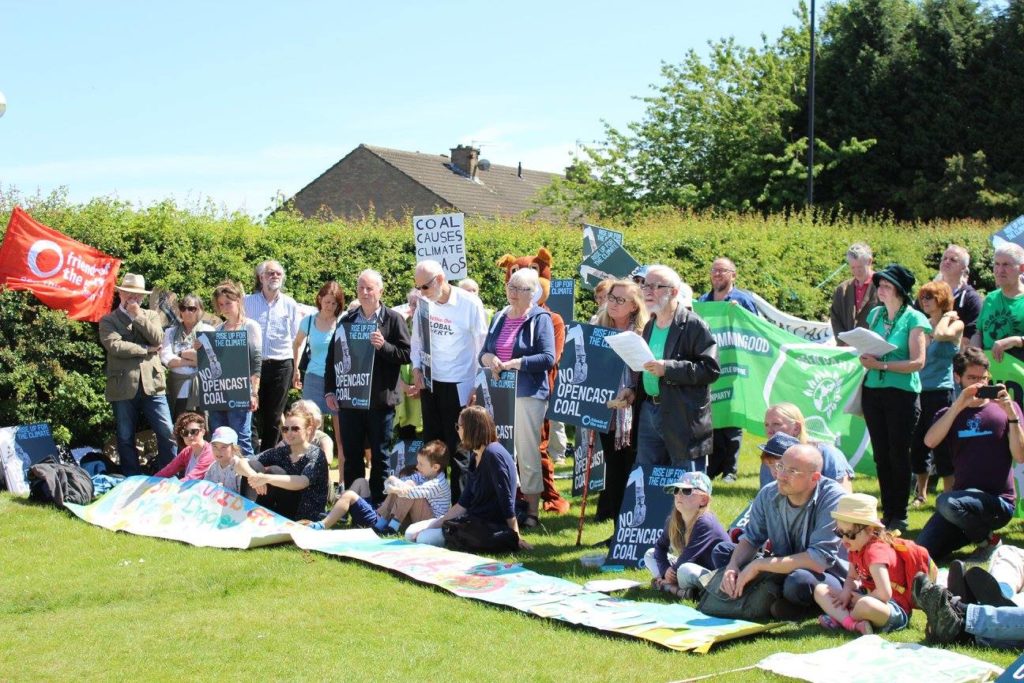 Over 100 people gathered for an afternoon rally to show opposition to the mine and love for the stunning coastal landscape of Druridge Bay.

The YLNM Network’s approach closely resembles the emergence theory for creating systemic change. This is summed up by the phrase: “Act locally, connect regionally, learn globally” and is focused less on critical mass, than the power of connection at the grassroots. YLNM is working consciously with this process by: identifying promising initiatives, for example, communities advancing alternatives or resisting creatively; connecting these initiatives in a network (YLNM) that has both regional and global dimensions; creating spaces for exchange and learning at the local level, and amplifying these to a global audience.

A Bit About the Guerrilla Grant

Europe is a global hotspot for overconsumption and a hub for mining finance, driving the neo-colonial expansion of extractivism overseas. At the same time, mining companies are increasingly looking to Europe as a renewed extractive frontier, even as the region begins to adopt policies on resource efficiency and circular economy. Over the course of a year, the global Yes to Life, No to Mining Network will support activists and networks across Europe to:

An increasing number of tools are available, produced by YLNM and others, but are in need of context-specific enhancement, wider translation and dissemination to support resistance processes across Europe. In particular they will focus on:

a) enhancing guides for resisting extractive industries and informational tools describing extractivism and mining’s impacts on agriculture and water.
b) helping these guides and tools reach communities faced, but not yet impacted by, extractive projects, in order to support preventative resistance.

Facilitation of in-country community-to-community exchanges that support preventative mining resistance efforts through the exchange of both resistance tactics and, critically, examples of successful resistance and alternative building efforts pioneered by communities and their allies.

They will facilitate exchanges in:

• Finland: Between Sami and non-Sami communities in the Arctic, which represents a ‘new frontier’ for mining, who have both stopped extractive projects and begun restoring mining-impacted lands.

• Spain: Between community members of Galician anti-mining collective ContraMINAccion and the growing number of anti-mining associations in the rest of Spain, where a wave of new extractive projects is meeting determined resistance rooted in re-forestation, re-wilding, the commons and rural municipalism.

These exchanges will be documented in writing and audio-visually, to distill success stories that can be shared more widely through YLNM to inspire regenerative approaches to resistance and demonstrate alternatives to development.

The network will organise a series of webinars, hosted by YLNM’s regional coordinators. These will bring together community representatives with academics, NGOs and others working on Just Transition to:

• Enable learning and exchange between community groups and organisations experiencing and resisting extractivism across Europe, with a focus on emblematic cases.
• Develop critical consciousness of extractivism and its trends in Europe and globally, especially in the context of climate change.
• Identify opportunities, collective strategies and narratives for addressing the systemic issue of extractivism in Europe and beyond, for example at EU policy level.
• Strengthen and broaden YLNM’s regional coordination within Europe for future collaboration. 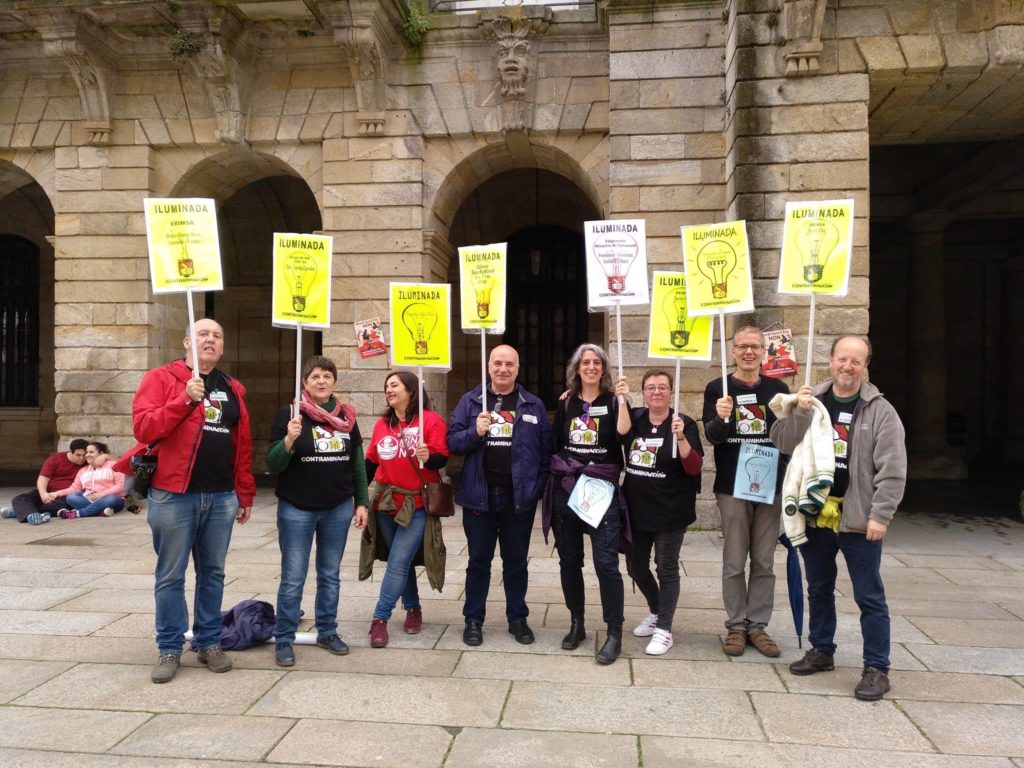