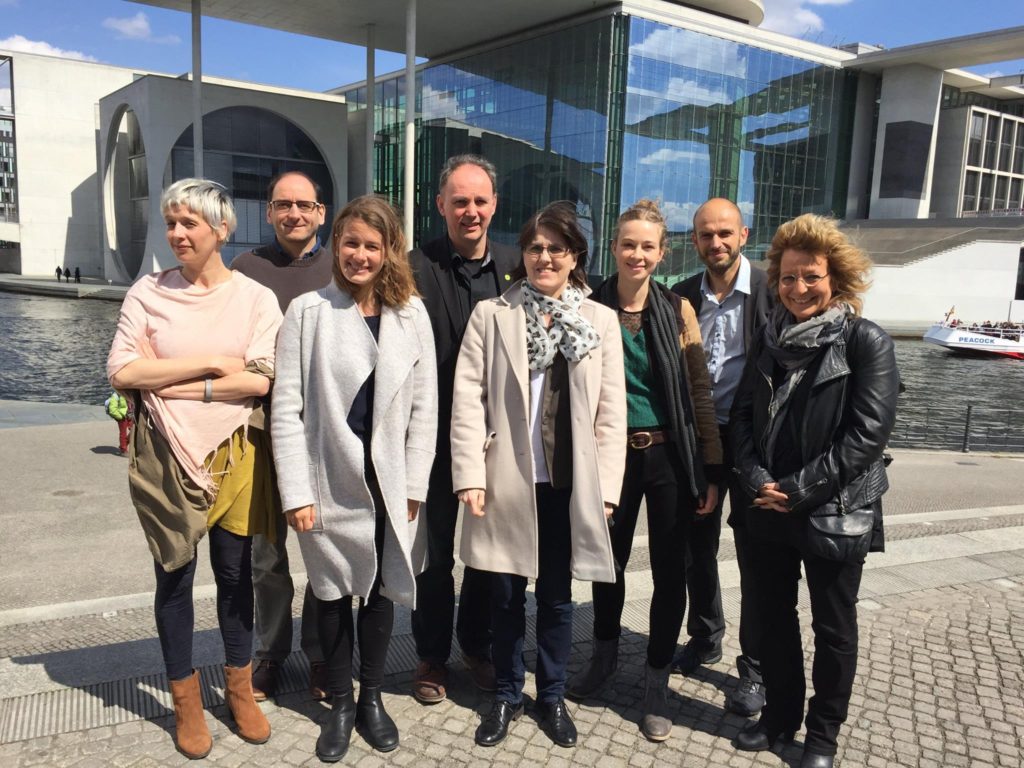 The lovely team of Sanktionsfrei with politicians Wolfgang Strengmann-Kuhn and Beate Müller-Gemmeke following the debate in the petitions-committee for the petition by Inge Hannemann.

Sanktionsfrei is a nonprofit association that aims to overcome financial cuts that people are threatened with, when depending on social security benefits, by showing that they are inhumane as well as financially and motivationally useless.

In Germany roughly 6 million people depend on social benefits, called Hartz 4. Those benefits are tied to very strict and complicated duties that need to be fulfilled by those who receive them. If one is unable or unwilling to meet these demands of the authorities, the benefit (€409 plus housing & health insurance) gets cut – even down to zero sometimes. The legal situation is extremely complex for both the clients and the Jobcentre employees, and many sanctions are illegal and even anti-constitutional. Even though more than 40% of all sanctions are successfully countered, the people affected have to wait months, sometimes years until they win their cases and get their sanctioned money back. Those affected need quick and easy legal support and money to buy food and to pay their bills. The goal is to tackle the negative stigma of unemployment towards an idea of support instead of punishment for those in financial need –> change public perception through campaigning and portraying the cases of Hartz4 recipients. Ultimately, Sanktionsfrei want to achieve the abolishment of the sanctioning law and already some progress has been made to that end. “Die Linke“ and (since November 2016) “Bündnis 90/Die Grünen“ are already advocating a sanction-free-minimum income for everyone under federal level. Also several social communities (e.g. Paritätischer Wohlfahrtsverband, Caritas) and working groups/partitions of several labour unions are opposing the sanctions. The idea is to reach a tipping point in order to kill the legislation. Sanktionsfrei is built on the assumption that at some point (if many people contradict sanctions) the admin workload for the welfare tribunal & financial costs for the Jobcentres if they lose the case, will be too vast to maintain the system. Moreover, individual recipients will benefit directly through their online tool to (1) contradict sanctions within seconds and (2) get instant access to lawyers. On top, they offer (3) money from their donation-based solidarity fund to fill up the financial gap that the sanction has created. Everything is for free and easily to access online, designed for everybody who receives Hartz 4, even before a sanction has been imposed. Therefore they build up networks with lawyers and advice centers, as well as the public. The total amount of sanctions imposed every year in Germany adds up to €180 million. So technically, every citizen of Germany saves €2.19 per year or €0.17 per month because of people being sanctioned.

The Guerrilla grant will be directed toward the campaign #notmy17cents through which they want to achieve the following goals:

– Inform people about the sanction system in Germany and how it affects the life of millions of people every year. The goal is to triple the number of supporters for Sanktionsfrei so they can become financially independent, and reach 3 million people through the campaign while spreading awareness about the issue more widely and in order to motivate more recipients to use the platform.

– Highlight the discrepancy between the saving for every citizen (€0.17 cents per month) and the consequences for sanctioned individuals (loss of food, housing, dignity).

– Raise funds for both, the solidarity funds and the long term maintenance funding of the Sanktionsfrei campaign, especially by in increasing the number of “Hartzbreaker” (people who regularly donate to the campaign).

This video (only available in German at the moment) explains the need for Sanktionsfrei and how they are tackling the issue.

– Development of the campaign landing page that informs people about the core messages of the campaign above will be accompanied by a social media campaign (built primarily on facebook & twitter). Based on their already existing crowd of over 23,000 people and media contacts they will push the campaign topic throughout a campaigning phase of 6 to 8 weeks (June to August 2017, incl. preparation and post-processing).

– During the campaigning phase they will have several media covered activities at local Jobcentres that promote and explain the campaign messages. They will also activate the local communities to take action at their local sites/areas. The donations raised during this campaigning phase will be used to set up further campaigns/events that show how not being afraid of sanctions changes peoples lives for the better, and supports motivation to get engaged in society and real citizenship. 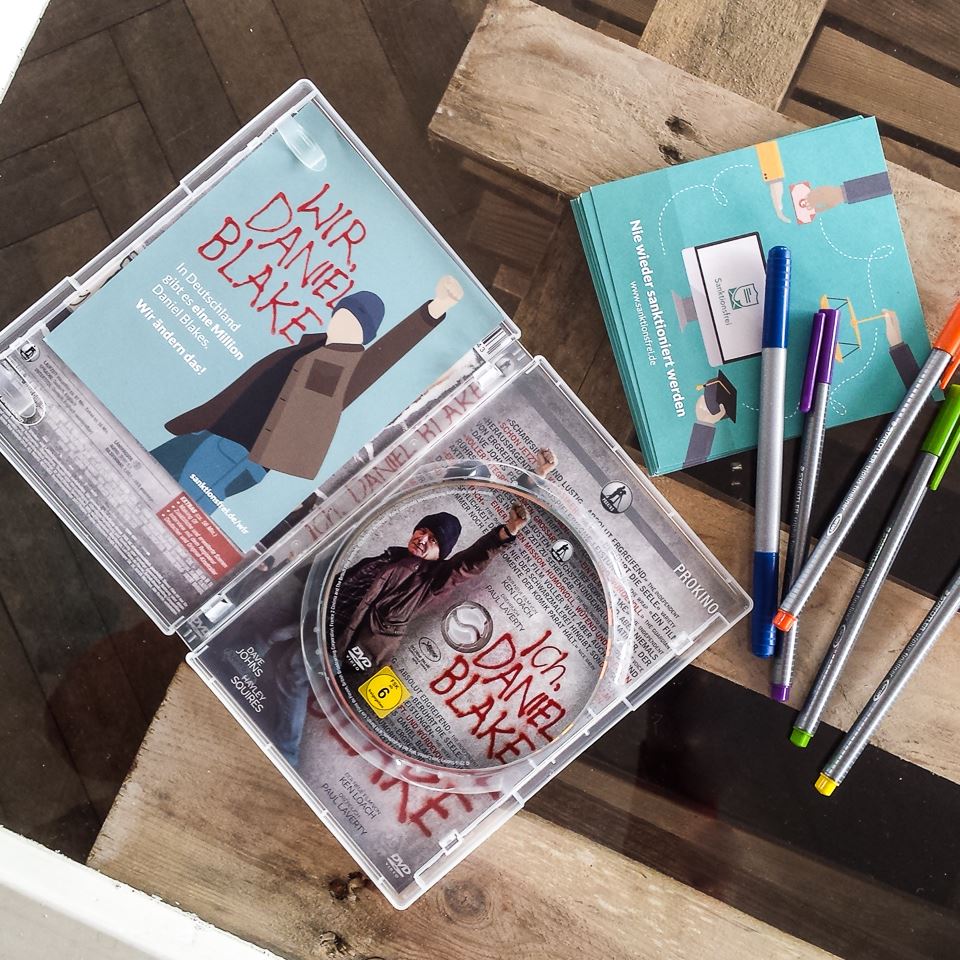 When the Prokino cinema released Ken Loach’s award winning film “I, Daniel Blake“ Sanktionsfrei succeeded to place an info flyer about the organisation and Hartz 4 in every DVD sold. They also established connection to some local picturehouses to screen an infoadvert for Sanktionsfrei before each screening of this film, really connecting the true and brutal social messages of the film to the every day realities of people struggling under social benefit bureaucracy and undignified social welfare systems.