Please Just Talk to Me
by Ivan March

Meet PARLEM. PARLEM, ‘Let’s Talk’ in Catalan, is an app. But unlike tremendously useful and popular apps like CandyCrush and AngryBirds, PARLEM is one of those pesky online platforms that is trying to bring about societal cohesion. At a time when functions like superimposing dog features onto your face, are aggressively competing for users attention, mindful use of tech has to up its game, but Nokia’s original slogan still has potential and connecting people in creative ways is not a lost cause.

The original app was born in Holland in the run up to the 2015 elections, to elevate the level of discourse that was happening at the time, which was rather complex and difficult and polarising. Sound familiar? A group of friends, Ruben, Leon, Willem and Sem developed Waaromkiesjij, loosely translated ‘Why Do You Choose?’, a web app that connected people of different political ideologies, and had them anonymously chat about whatever burning issues were on their minds. They used it in the Dutch elections to try and overcome echochambers and filterbubbles. A few months ago, during the German elections that took place on September 24th, this experiment was repeated in a new national context. Germany’s Waaromkiesjij equivalent, Diskutier Mit Mir (Discuss with Me), functioned in the exact same way.

After just one month, more than 70,000 threads where discussed across roughly 35,000 online conversations between people affiliated with 25 different political parties, replicating the results seen during the Dutch launch. 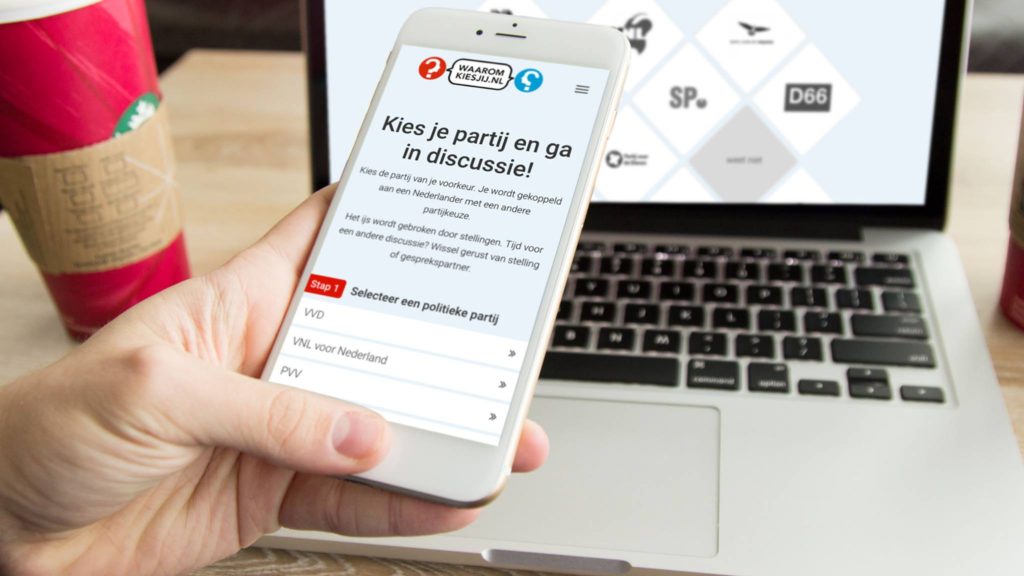 The third incarnation of this app is now PARLEM, with aspirations to combat polarisation and bring people together in dialogue who wouldn’t normally be giving one another the time of day. As the Catalonian elections are around the corner (21st of December) we did not hesitate to give a guerrilla grant so that the small, diverse team of activists was able to launch the PARLEM platform in Catalonia. Why Catalonia? Unless you are Gusawi tribesman from Papua New Guinea or a Mongolian Dukha nomad, you really don’t have an excuse for not knowing what’s been going on in NorthEastern corner of the Iberian Peninsula. In a nutshell, on the 27th of October, the pro-independence majority of Catalonia massively votes in favour of independence, seconds later the Spanish Senate invokes Article 155 (Article 155, means Spain puts Catalonia in a political headlock), after invocation of Article 155, Spanish Prime Minister Mariano Rajoy sacks the Catalan government, dissolves their Parliament and calls for regional elections, which will take place this coming Friday. 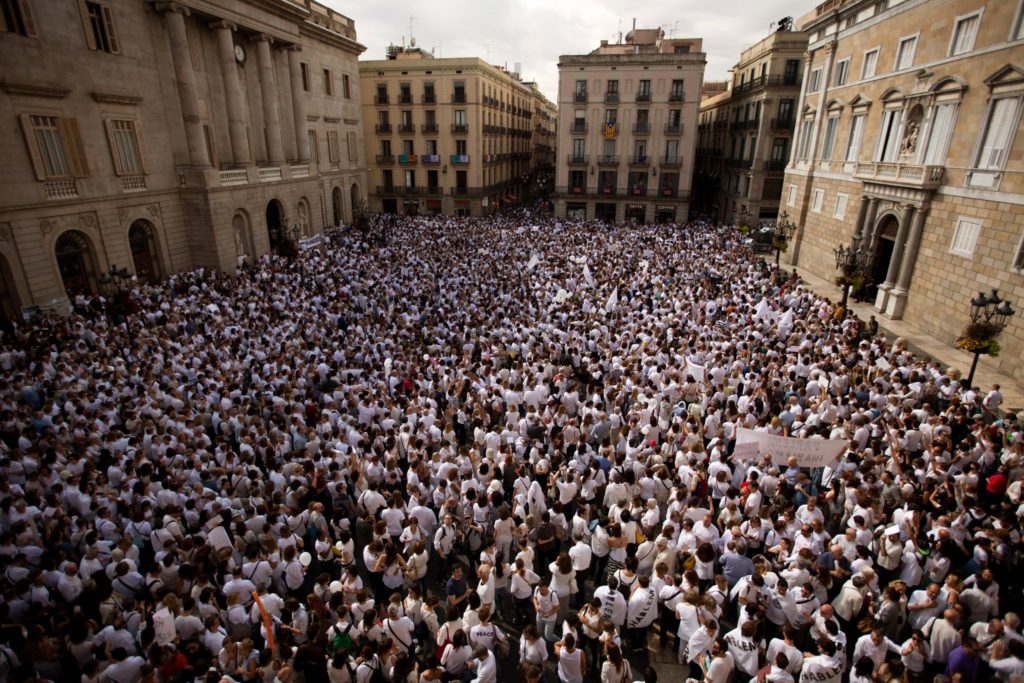 Thousands of people gather to highlight the importance of speaking to one another over nationalism. Emilio Morenatti/Associated Press

Mainstream media, true to form, focused on graphic imagery of more extremist demonstrators in both Madrid and Barcelona, those who gathered in squares angrily waving Spanish or Catalonian flags. However, less featured demonstrators also gathered in the streets, wearing white and carrying white flags, calling for dialogue between the Catalan and Spanish governments. These people were saying that what the two sides “need is couples therapy!” and that Rajoy, and Puigdemont (the now suspended president of Catalonia), should “go for a beer.”

And precisely that is the idea behind PARLEM. It is a kind of ‘Political Tinder’, but without the walk of shame. The app connects you in a one-to-one chat with someone who you fundamentally disagree with, after you’ve answered that one question, about where you stand on independence and Article 155. After that it is in the hands of the interlocutors to take the conversation where they want. While one might imagine that conversation can break down quickly, during the first 2,000 conversations that have taken place over the past few days since PARLEM launched, the feedback is overwhelmingly positive. The frequency of trolling is for now inversely proportional to trolling on any post on feminism on social media and people are reporting that users are friendly and discussing issues in-depth, even though they have very different political inclinations. 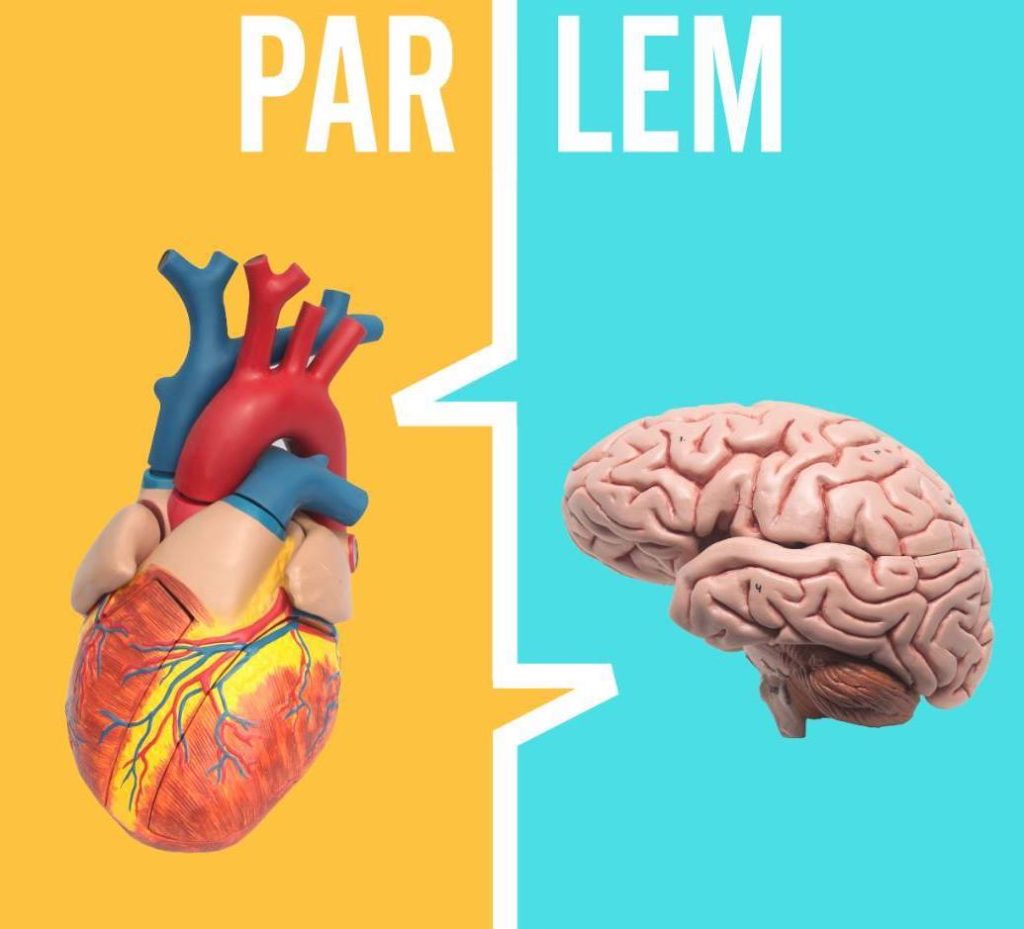 PARLEM in a nutshell. How to align the brain and the heart to have both thoughtful and meaningful conversation and not let one entirely in the driver’s seat.

I’ve realised that lately, when I speak at conferences, I find myself using words like fragmentation, segregation, polarization, extremism almost as much as conjunctions. It is clear that society is becoming more divided, and while people succumb to fear and exhaustion the divisions will only grow deeper.

The importance of dialogue and learning how to communicate better with one another has always been important, but now acquiring these skills is a pressing issue, without which Mad Max will soon seem like a documentary series.

I could of course bore you with a list of quotes about the importance of dialogue and I will.

“Communication leads to community, that is, to understanding, intimacy and mutual valuing” – Rollo May

“Dialogue starts with the willingness to challenge our own thinking, to recognize that any certainty we have is, at best, a hypothesis about the world.” – Peter Senge

What these thoughts highlight is that arrogance and hot-headedness are enemies to understanding one another. If we are to use communication to create communities with mutual values, we first need to get good at listening and if we are going to get good at listening we first need to be open to it. This is where initiatives like PARLEM come in. People are curious to hear what others think, others with wildly different views from their own, but what one finds when talking to those who are wildly different from them is that sooner or later you find common ground, and where there is common ground there is a chance for synthesis, for understanding.

When we chose not to listen to one another, the end result is rarely pretty..

But what is the role of philanthropy in all this? Since we’re a foundation, we care about how philanthropic funds can be used in creative political activism. Foundations are notoriously allergic to any and all things political – the more overtly political a project the faster Foundations run. This I think is misguided at best and dangerous at worst. When those who fan the flames of division are shamelessly fundraising to rally support, Foundations need to take an active stance in defending the human rights and values which they believe in.  Foundations are in danger of being bystanders to political calamities due to a misplaced fear of being perceived as nepotistic or shady. If I as a Foundation staff member am an ardent believer in New Municipalism, more decentralised forms of governance and feminised, participatory politics, I see it as my duty to use my clout and know-how in channeling support to such initiatives. This might mean showcasing, collaborating or rubbing shoulders with political parties or movements who also endorse or promote these ideas. Where’s the horror?

I think it is hilariously hypocritical to be a supporter of affordable housing and not be opposed to Theresa May’s cabinet, to be a climate justice warrior and not stand up to the Trump administration or to be pro-immigrant and not actively resist the AfD. If we agree that mainstream politics still has some societal influence, is it not an extremely effective strategy of challenging detestable policies to empower the political movements who do just that? Moreover, sometimes movements evolve into parties, and then what? Once a movement matures enough to become a formalised entity such as a party, and can thus exert more influence, do institutional backers stop backing the horse they helped groom as it takes its first steps?

With regards to PARLEM, we instantly jumped at the opportunity to try and see whether tech can be used as a means of fostering dialogue between ‘rivals’ and what this could mean for social cohesion initiatives. Is there a risk that we are called out for pushing some hidden political agenda? Of course there is, but if you let hypothetical risks stop you from using grants to test out new things, you are clearly not aware of the benefits of fearless experimentation. What is more, it really helps to be nimble and fast. This grant was time-sensitive, it was either going to happen quickly or not at all. Foundations are generally bureaucratic behemoths and reply-times operate outside of the fast-paced, ever-fluctuating real world. So get nimble or miss opportunities.

Finally, this initiative was a third replication and the pioneers who kicked this off in The Netherlands and supported the German iteration, now helped PARLEM get their app off the ground. This is precisely the kind of European collaboration we are looking for. And for us this is a public education grant. There is an abundance of ever-growing academic literature that points to the power of social media to transform political processes (Lazer et al., 2009) as well as the potential to amplify the importance of peer effects in political behavior, while it is true that the internet can function as a bias-confirming, echo chamber (Conover et al., 2012) use of communication platforms expose people to a much higher diversity of perspectives than offline networks do (Bakshy et al., 2012; Mutz, 2006), and it is these types of interactions that can reduce political dogmatism and even party affiliation (Messing & Westwood 2012). 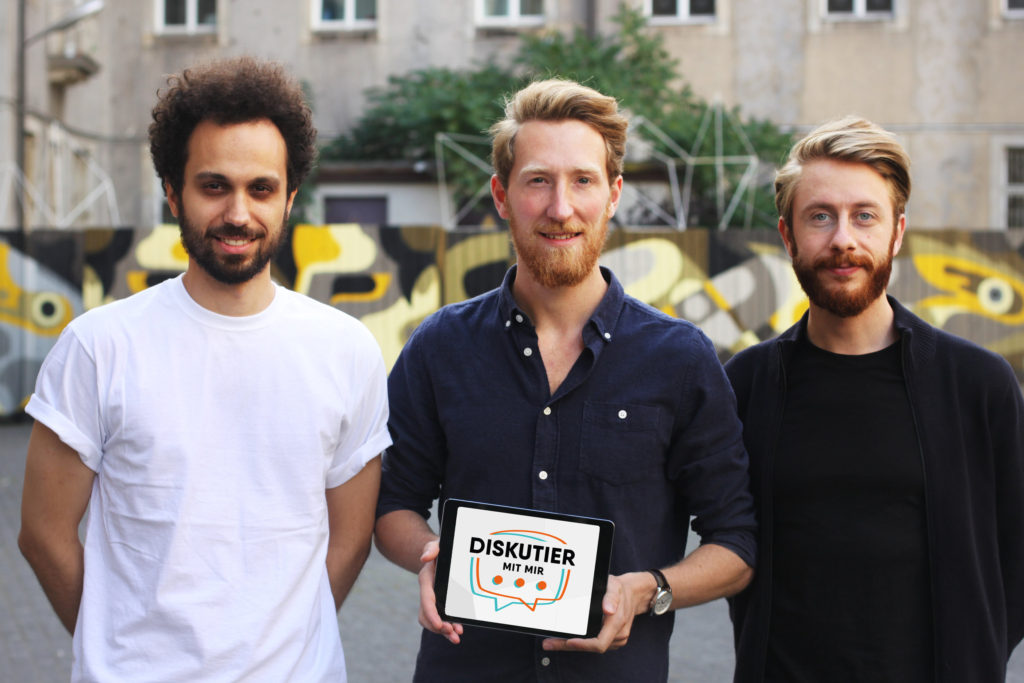 The team behind the German version of the app. While they wont be winning any awards in intersectionality anytime soon, they kickstarted the idea replication and are in my eyes posterboys for the power of idea pollination.

The Dutch team behind the initial app idea, has since set up the Vox Pop Foundation, which facilitates this ‘social media for social cohesion’ paradigm into various national contexts. If you want to replicate this in your home country do get in touch with them, and if you want to know more about how as a philanthropic institution you can support political activism get in touch with us, we’d love to hear from you. Let’s Talk.