It is customary for Foundations to issue a letter at the beginning of the year, laying out their intentions, aspirations & resolutions for the days ahead, and some have reached serious recognition status like the Annual Gates Letter. Since dreaming and intention setting are imperative components to big picture activism, and while we are not your garden variety Foundation, we are playing by some rules of the game, therefore we’re doing our Guerrilla riff on the New Year’s Letter, what we’re calling our New Year’s Revolutions.
It is simple; we are posing a single question to ourselves:

‘What is the revolution you’d like to see taking place this year?”

(and we’ll most definitely be using whatever power we have to nudge, shove or steer the budding movements in these directions).

You’ve probably heard of Tarana Burke by now. More than ten years ago she started an awareness raising movement spotlighting the pervasiveness of sexual abuse and assault. Even if you still haven’t heard of Burke, you’ve heard of the #MeToo campaign, unless you’re a naked mole rat and even then you might have heard of it. #MeToo became one of the most viral hashtags of 2017, trending more than the tweeter-in-chief and the bottom line was simple – break the patriarchal chokehold on victim shaming and silence. The preliminary step was to create an atmosphere of solidarity among those experiencing abuse. And yes, the overwhelming, overwhelming, overwhelming majority has been women, and yes this has been happening for millennia, yet it has never be translated into global conversations at this scale. There was flack. There was fallout. There was Matt Damon. There was Aziz. There was polemic. There is polemic. Bound to be when waves are made. But at least we’re finally talking about it. Our celebrity-obsessed culture allowed this message to spread like wildfire in Hollywood, so some ogres like Weinstein got (their immensely mild) comeuppance, with a clear focus on the privileged and the famous, i.e. those who matter in the grand scheme of things. So my wish for this New Year’s Revolution, is that consent becomes a universally understood concept. It is not that complicated. I’m stealing this video on consent (above) from my friend Asmaa’s poignant article (read it now) on #MeToo and her nuanced analysis of post-traumatic psychology.
There is some serious momentum now and in addition to more women’s marches we need to see some radical policy change, for instance let’s follow Iceland’s lead and make the gender pay gap illegal. Yes, Jordan Peterson will disagree and the world’s smallest cello will be playing for him by Jacqueline du Pré’s ghost. Let’s really push the agenda on feminising politics and give more authority, autonomy and legitimacy to women across industries and social strata. Let’s rethink capitalist growth, which has been largely supported by unpaid domestic work and exercised traditionally by women.
I want to see the community healing movement that Burke started in 2006 to take root in every community across the globe, in as systemic and intersectional a fashion as possible. Queer, disabled, uncategorisable groups need to be a part of this conversation. Let’s make this discussion as systemic as possible and connect the power relations in a bar to those in a boardroom, to gender pay inequity, to workplace double standards, to discrimination, to role models for girls in novels and films and songs. I want to see more Katniss Everdeens and Furiosas. It’s great that Time Magazine named the #MeToo silence breakers as the Time Person of the Year for 2017, and it’s great that everyone wore black to the Golden Globes, but it is high time for this fundamental, femme-powered fight to flourish for every woman. But most importantly, for once, it doesn’t matter what I, a white dude, want.

Radically Challenging the Gospel of Money 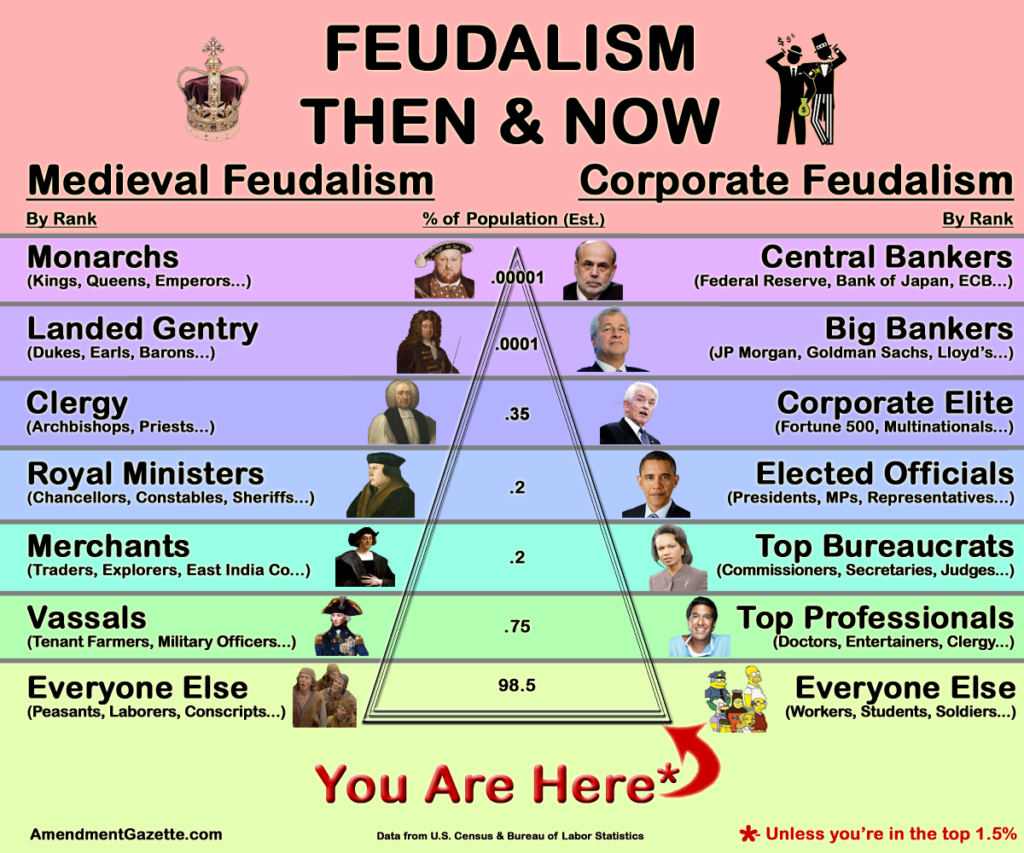 The recent news that Deutsche Bank is again paying over €1 billion in bonuses to its investment bankers while making a loss of even more billions is hardly understandable – even if Deutsche Bank’s losses can largely be attributed to Donald Trump’s most recent stunt: the tax reform / largest gift to corporations since the Thatcher years (at least then there were protests and riots… but I’ll have the historical retrospective of direct action for another day).
The stated intention of Deutsche Bank’s CEO of wanting to ‘keep good bankers’ in the firm with unjustified bonuses is not only nonsense from a motivational psychology point of view, it also exposes just how skewd the logic of the financial industry is and how little it has changed #10yearsafter the global financial collapse. Therefore, rather obviously, my first wish for a new year’s revolution is a massive, concerted outcry and large-scale protests across Europe to demand a financial system that serves people and the planet and replaces the current extractivist financial industry.
We are not going to win this battle with lobbying the EU – the financial industry has that sorted out with a staggering €130 Million officially spent last year on lobbying. We need a broad intersectional movement that is strongly rooted in grassroots activism – for example against the financialisation of housing (shoutout to our friends at the European Action Coalition for the Right to Housing and the City).

At a deeper level though, I am hoping for another, related, revolution. A revolution of values and frames that re-envisions the financial industry and economy. As an educator teaching business university students, I am often confronted with – and shocked by – very clever, internationally educated young people who want nothing more than to ‘quickly make their first millions under the age of 30’ and who admire the traders and their lifestyles as portrayed in films like ‘The Wolf of Wall Street’. I often wonder what went wrong in their education – as business students and humans – for them to end up with such a worldview at such an early age and with such potential. That’s why I believe that we need a revolution that challenges the symbolic power of the finance industry and establishes an attractive alternative able to capture the imagination of young people. I still believe in the good nature of most of us and that hardly anyone actually, deeply, wants what these students aspire to be. I also believe that it is possible to build a life with meaning that is not grounded in ‘making it’ in a completely exploitative and dysfunctional system that destroys our spirits as well as our world.

Bridge the Devastating Divide, No Seriously 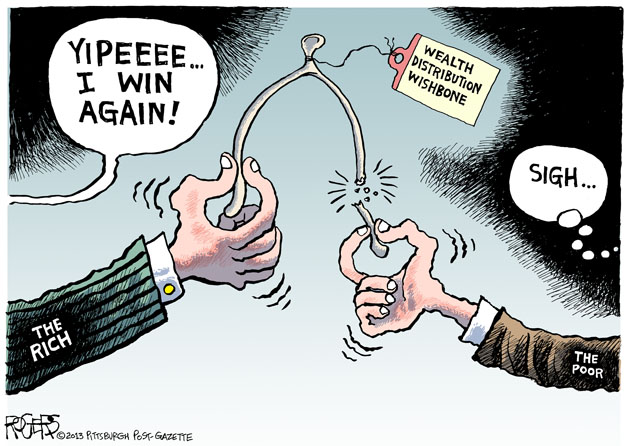 A lot of us can probably agree that 2017 was not a great year overall. Sure we invented the SkinGun that sprays patients with their own stem cells to prevent scarring & we might have found a cure for ALS, but particularly in political news, a lot of us were left with a bitter taste in our mouths. The election of demagogues likes Donald Trump demonstrates the need for systemic change. One root ailment is deep inequity, particularly in wealth ownership. The wealth gap keeps widening, and now 42 people hold the same wealth as 3.7 billion poorest.

On a personal level, my aspiration for the new year is that more millennial inheritors, such as myself, realise that their inheritance will be useless on a dead planet. My peer group has a disproportionate amount of power in the world today and thus a disproportionate responsibility. What use is wealth in a world of famine, sickness, pollution, grief? Alanis Obomsawin, a member of the Abenaki, an American Indian people of Maine and southern Quebec, put it as follows:

“When the last tree is cut, the last fish is caught, and the last river is polluted; when to breathe the air is sickening, you will realize, too late, that wealth is not in bank accounts and that you can’t eat money.”

And why the millennial wealth owners? While not wanting to be ageist, it is the older generation of wealth holders that has got us to this state of affairs, and it is now up to their successors to choose whether they want to maintain this status quo or to opt for a sustainable alternative. Therefore, it is high time to start giving. Giving more and more boldly. And yes this includes giving up some privileges and power. In particular, we need to find a way to give to the roots, give power to the activists and movements struggling for a fairer and less oppressive world. A European chapter of Resource Generation, a network of progressive inheritors in the United States, would be boon for social movements in Europe and across continents. Let’s make it happen!

Some Thoughts on Effective Altruism
by Romy Krämer

Next to grant-giving, part of our work at Guerrilla is engaging people of wealth in conversations about our more radical approach to philanthropy in the hope that this helps move resources to grassroots social movements and place attention on the need for a just transition. Many of the people we speak to in this capacity have expressed an [...]

- more
Working on Work during a Pandemic
by Ivan March

'Autonomy, a little think tank with big ideas about how to tackle the coronavirus & how to radically re-organise in its wake' Bronnie Ware, an Australian palliative care nurse, recorded the dying epiphanies of patients she cared for in the final weeks of their lives, and she collected these into a book called The Top Five Regrets [...]