The only thing more alarming than the election of Trump and the manifestation of Brexit, is how many similar political fiascos are being tacked onto these two oft-quoted events. The rise of Marine Le Pen, the entrance of the far-right AfD party into the German parliament, the police brutality in Catalonia, Theresa May reminiscing about running through wheat fields – it makes us terribly concerned as to what comes next. 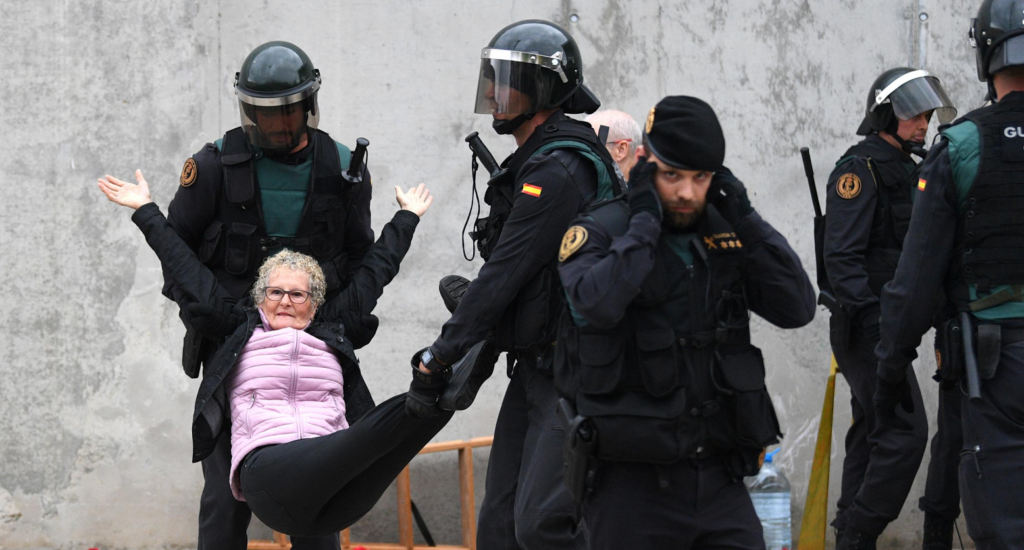 Age is no obstacle to Activism, as evidenced from this photo that quickly went viral on the first day of October during police attempts to shut down the Catalonian independence referendum

While it does seem that we are potentially snowballing towards a doomsday scenario, only exacerbated by South Park’s prophetic storytelling, it is worth remembering that the past year also saw unprecedented grassroots mobilisation for Bernie Sanders, the first potential peace deal between the Colombian state & FARC in over half a century, and the mass awakening to indigenous wisdom due to the Standing Rock water defenders. 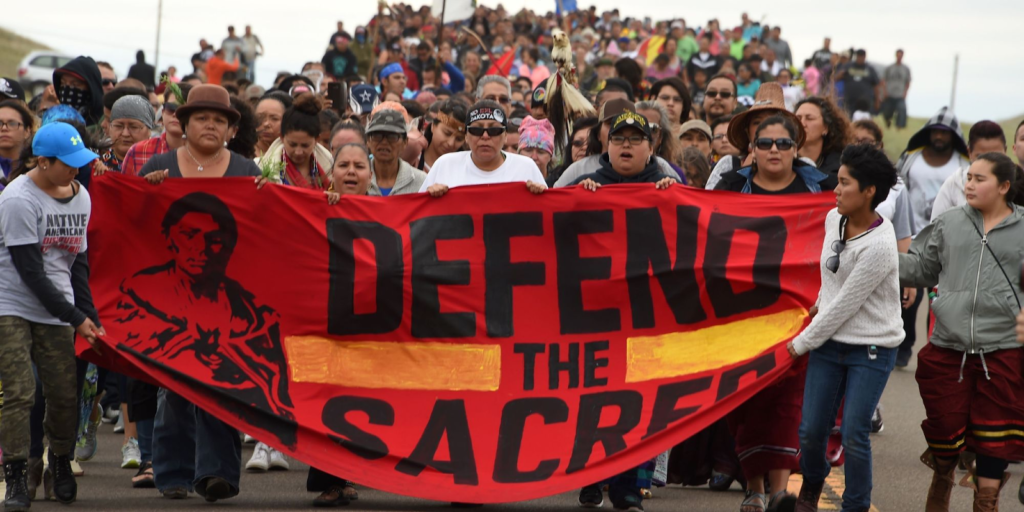 The #NODAPL activists captured the popular imagination regarding what is sacred to us and whether we are ready to defending, in North Dakota and far beyond

Of course it is entirely in humanity’s hand to determine how our story will be told, assuming nuclear winter doesn’t happen and there is someone left down the line to tell it to. We think this essentially boils down to one question: will we follow the unsustainable path we are on and risk major anthropogenic cataclysms, or will we radically shift mindsets and transition from the pernicious systems they create?

The need for systems change is immense and urgent. But it seems that people seriously utilising/studying/implementing systems thinking are few and far between. Whenever we raise the issue of root causes, such as educating & empowering women and girls as a strategic move to combat climate change (in addition to being incredibly important in general), our interlocutors smile awkwardly not knowing how to process, what to them seems an entirely tangential suggestion as it is not connected to fossil fuels or animal agriculture, and the systems thinking once again loses its moment in the sun. Paul Hawken’s recent book Drawdown ranks solutions to tackling global warming, and when combined, educating girls and empowering women, is the top ranked solution. The UN projections are that the global population will stand at 9.7 billion people by 2050, if family planning programmes are properly implemented. Drawdown modelled the impact of family planning (i.e. how much energy, building space, food, waste, and transportation would be used in a world) compared to little or no investment in family planning by 2050 and the resultant emissions reductions could be 119.2 gigatons of CO2 (this is a lot) – half of this total was attributed to educating girls. 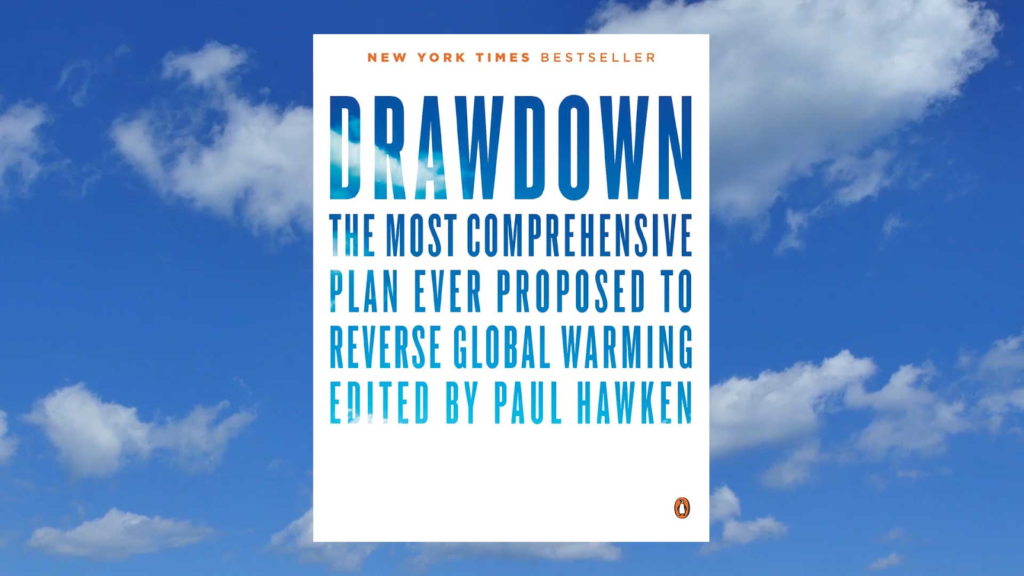 The problem is, systems thinking is quite complex, therefore quite a bit of training is needed to get good at it, and interdisciplinary research is necessary to find the stronger pressure points. Therefore, we as Guerrilla Foundation, are going through an action experiment with Smart CSOs Lab in order to see just how we can make our work more systemically oriented.

We fund activists and grassroots movements as the mediators of social change, and Smart CSOs Lab within their Re.Imagining Activism Guide, have identified new roles for activists, ‘The Acupuncturist’ being the role most closely connected to identifying these crucial pressure points that then let others know what strategy it is best to adopt if we are to bring about major change. 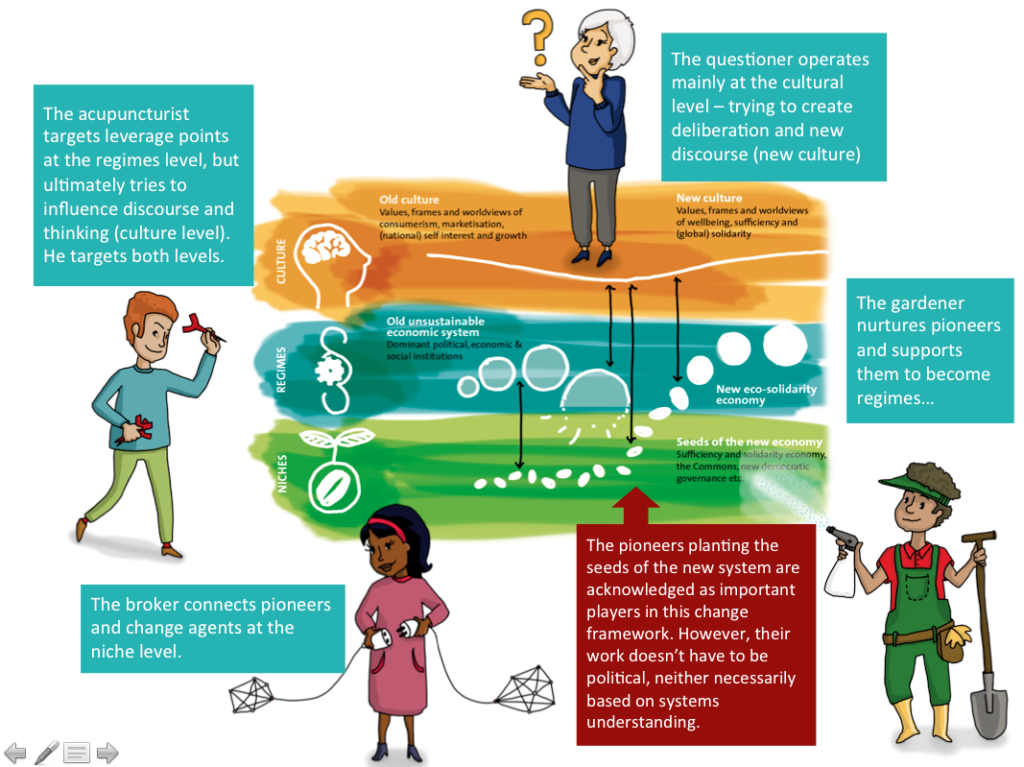 Moreover, the Stanford Social Innovation Review recently published an article by Julie Battilana & Marissa Kimsey entitled ‘Should You Agitate, Innovate, or Orchestrate? – A framework for understanding the roles you can play in a movement for social change’. They identify these three roles played by participants of social movements: agitator, innovator, and orchestrator. The agitator raises awareness, and brings the grievances of specific individuals or groups to the forefront. The innovator creates actionable solutions to tackle these grievances. And the orchestrator coordinates action across groups, organisations, and sectors in order to scale the solutions. “Any pathway to social change requires all three. Agitation without innovation means complaints without ways forward, and innovation without orchestration means ideas without impact”.

Therefore within our grant-making, if we look at initiatives we’ve funded in relation to climate change, we start with Ende Gelände, which could be considered agitators, they draw attention to dirty energy, they occupy coalmines, and bring the issue of extractive industries and fossil fuels to the forefront. This summer, we supported their occupation of the vast lignite mines in the Rhineland and they brought together over 6,000 activists, generating plenty of buzz and attention. 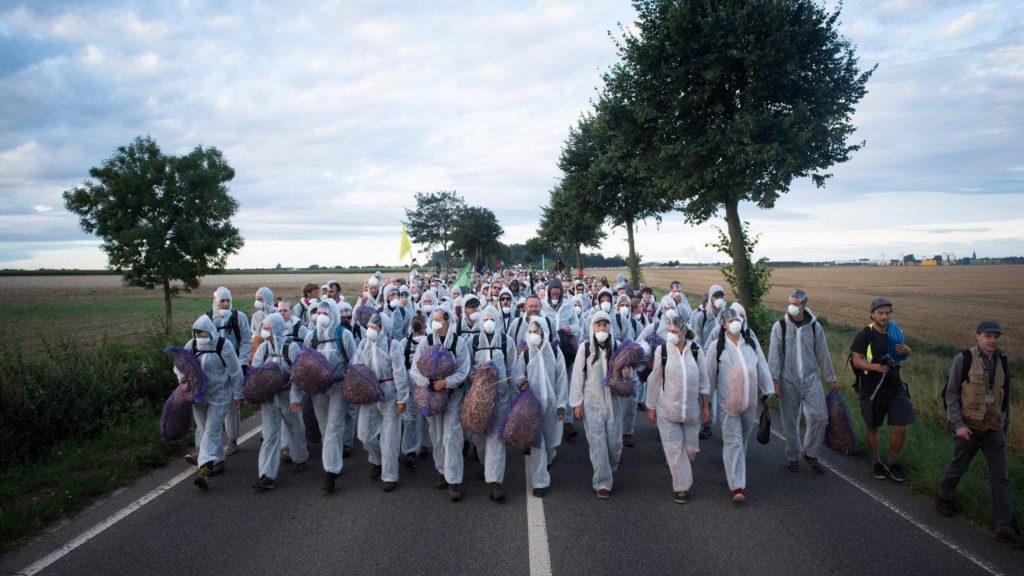 Then we have Rob Greenfield, an individual ecoactivist, who showcases innovative ideas that allow people to adopt zero-waste-culture habits and is clearly the innovator. Alright, Rob is definitely also an agitator (bringing issues to the forefront like exposing trash production) and an orchestrator (creating videos that provide guidance on sustainable practices). Then there’s Urgewald our definite orchestrator. They monitor the activities of German companies & banks abroad and educate the public about the negative impacts of their consumption patterns. The Urgewald team of intrepid women (and a couple of men) has a notable track record, such as orchestrating major coal divestments of the Norwegian Pension Fund & Allianz. 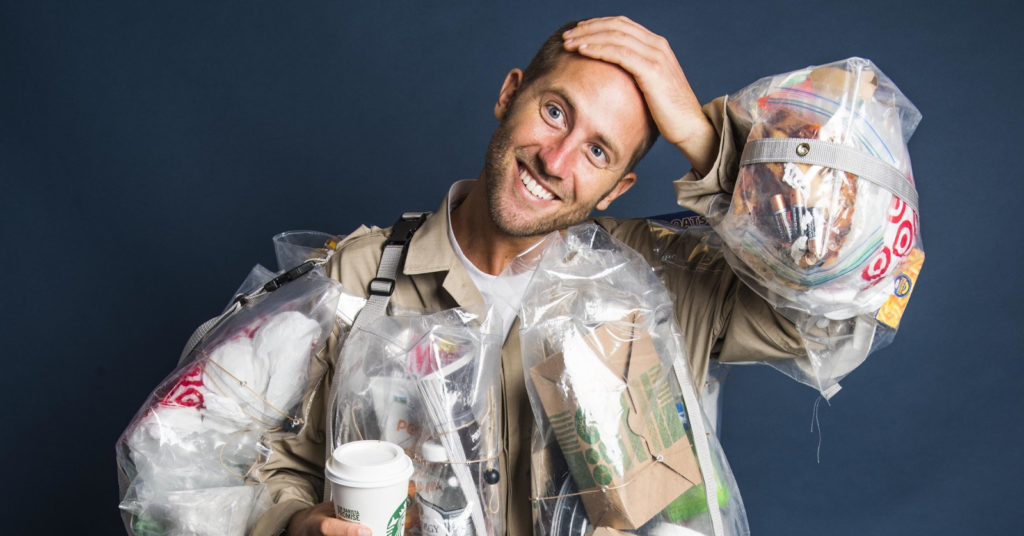 Ecoactivist extraordinaire, Rob Greenfield talking trash & how to be better at wasting less

So we see that there can be overlap between agitation, innovation and orchestration but all three approaches are necessary when applying pressure to the identified leverage points to bring about system change. We call it the ‘Art of Acupuncture Activism’.

When it comes to the political arena, the nature of the pressure points changes somewhat. It feels like we are living at time of regressive politics, battles that seemed finally hard won are being challenged, such as Trump rolling back on free birth control and issuing a guidance document that essentially sanctions discrimination against LGBT individuals. However, politics is as inevitable an arena to social systems change as the Coliseum was to Russell Crowe’s general Maximus. This summer we co-funded the Fearless Cities conference on New Municipalism, organised by Barcelona’s governing political party Barcelona en Comú. We are thrilled to be involved in the New Municipalist Movement (read more about it here) and the fact that it brings the kind of progressive politics we can get behind, namely; participatory, feminised, cooperative, egalitarian & deeply democratic (because deeply has become a necessary qualifier of late since we do not actually do what we say anymore). However, Barcelona en Comú is the perfect example of an agitator-innovator-orchestrator triple threat, politics-style. The party first launched as a citizen platform in June 2014, composed mainly of anti-eviction activists and forward-thinking academics, their cause was to decry injustices and offer solution to societal wrongdoing – they agitated. Soon, realising that to enact change they needed political clout, they organised into a party but with plenty of novelty – they innovated. For instance, they set a cap on party earnings at a maximum monthly net salary of 2,200 Euros, and they walked the walk, and citizens responded, by voting them in during 2015 municipal elections. Since winning, they orchestrated a lot of things, the Fearless Cities being one of many; but aside from their user manual to creating a winning municipal movement their eight lessons on “How to Take Back Control” are probably the most inspiring: 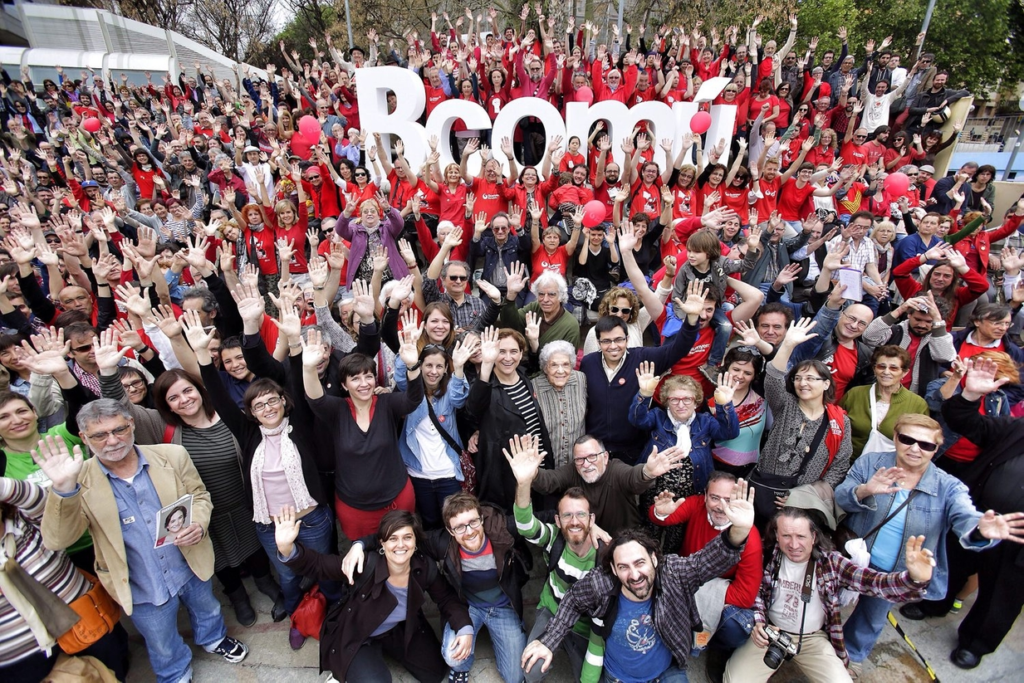 Barcelona en Comú is definitely not your run-of-the-mill party, their edgy, honest and the hallmark of what we consider to be progressive

Barcelona en Comú is definitely not your run-of-the-mill party, their edgy, honest and the hallmark of what we consider to be progressiveEven though Tony Blair is not the likeliest person we’re moved to quote, he did aptly say that the “21st century will not be about the battle between capitalism and socialism but between the forces of progress and the forces of conservatism… within us” and that “what threatens the nation-state today is not change, but the refusal to change in a world opening up, becoming ever more interdependent”.  So whether we are funding agitators like the grassroots parliament watchdog Vouliwatch in Greece, or innovators like Das Progressive Zentrum (who are actually now convening the INNOCRACY conference on democratic innovation), or orchestrators like DICO (the German Institute for Community Organising), the political pressure point is subverting the top-down, hyper-hierarchical, corporate-entrenched, technocratic, neoliberal elitism to a new democratised, decentralised, transparent, cooperative and regenerative system for the many, not the few.

Turning back to Paul Hawken, who really reframed climate justice by stating that, “global warming isn’t happening to us. It’s happening for us. It’s a gift. Every system without feedback dies. This is feedback. It’s an offering to re-imagine who we are and what we can create with our minds, our hearts, and our brilliance”. We cannot be sure for how long we’ll be around, but while we’re here, with some creative systems thinking and some activist acupuncture, we will agitate, innovate, orchestrate as much as possible and openly share whatever we learn along the way.

Much like in George R.R. Martin’s Westeros, Western democracies are controlled by the privileged few, at the expense of the many, the only difference being that in reality the few are far less attractive and there are no dragons

Why We Do What We Do
by Ivan March

INSERT-GENERIC-BUT-GOOD-SOUNDING-SOCIETAL-OBJECTIVE-HERE Vision. Mission. Strategy. Five-year plan. Ten-year plan. Theory of change. All terms that outline a way to achieve one or more goals under conditions of uncertainty. There are currently thousands of philanthropic foundations around the world. Thousands of visions, thousands of [...]

- more
A journey towards participatory grantmaking - Part 1
by Romy Krämer

This summer, when the Guerrilla Foundation was not even officially registered yet, we took the bold decision to join the Open Society Initiative for Europe, the European Cultural Foundation, and the Charles Leopold Mayer Foundation in developing a participatory fund for European activists. [...]