A journey towards participatory grantmaking – Part 1
by Romy Krämer

This summer, when the Guerrilla Foundation was not even officially registered yet, we took the bold decision to join the Open Society Initiative for Europe, the European Cultural Foundation, and the Charles Leopold Mayer Foundation in developing a participatory fund for European activists.

As you might’ve guessed from the title, getting the fund set up is a longer journey. Time for a first update about where we are in the process. I’ll share why we were interested in participatory grantmaking and report about a first prototype development exercise for the grant that brought together more than 30 activists from all over Europe.

What is participatory grantmaking and why are we interested?

In line with grassroots activist beliefs about the need to involve and mobilize those who are directly affected by an issue, participatory grantmaking aims to involve those ‘affected’ by foundation grants into the decision-making process. In short one could say that:

Many foundations still consider this a very exotic idea and seem afraid to give up their power. But there are a couple of great examples and good reasons out there for participatory grantmaking, some of which are reviewed in this Grantcraft report and in a blog post by the EDGE Fund UK on models of power-sharing.

Taking a systems perspective and considering wealth accumulation as the result of an extractive economy that does not account for all of its social and environmental side effects, philanthropic money can be seen as a common good that should be managed for the benefit of all. Such ideas challenge the power concentration in foundations and motivated us to look into this topic.

Many of the working examples of participatory funds are operating at the local or national level because the nature of their process demands face to face meetings of the participating civil society organisations or activists to decide about who receives funding. If you’re interested in how such a process might look, I recommend diving into the two months long decision-making process of the EDGE Fund UK that involves and physically brings together its members.

Are participatory grants for activists possible and needed at the European level and how could this work?

This is the question that we asked ourselves when discussing the idea among the four foundations involved in its development. We quickly realised that the only way to find out was to not just talk about participation but actually live it. That’s how the idea for a meeting with activists from across Europe was born and that’s how I travelled to Seville in the second week of December.

The Seville Activist encounter – as it was labelled by our absolutely amazing hosts and meeting organisers from Zemos98 – brought together an impressive group of more than 30 activists from across Europe with representatives of the four founding foundations for three days full of thinking, discussions and inspiration. 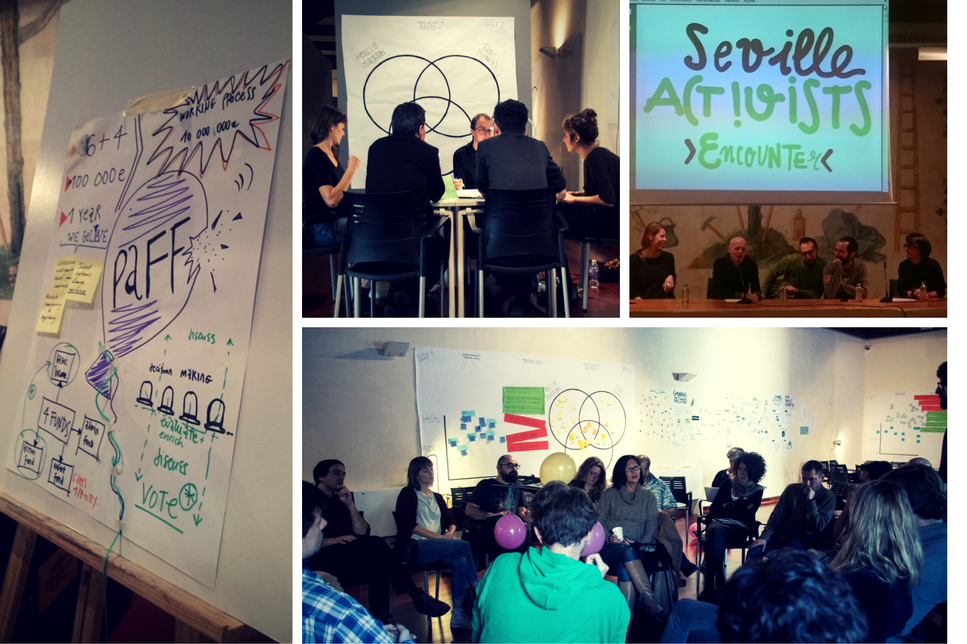 The Zemos98 team had come up with a well-thought out program to make the best of this unique space for exchange and co-creation. Much of the three days was spent in small groups of six people each of which was tasked with developing their own prototype for the participatory activist fund based on a set of core needs of European activists identified on day one. Intense knowledge sharing sessions by some of the group, who had more experience with participatory processes, and sharing intermediary outputs with other groups assured that everyone received enough input to come up with realistic solutions.

You might imagine that it is not easy to develop ideas for a functioning participatory decision-making process that works across Europe, is fair, effective and does not reproduce the power imbalances of traditional grantmaking.  Luckily the Zemos98 team had mixed fun energisers into the program (I now know how entertaining Rock, Paper, Scissors can be!) that allowed us to relax amidst intense and passionately held discussions.

Some core needs (e.g. an urgent response fund) and demands (full transparency, no burdensome applications and procedures) were shared by nearly every working group. Other points were deeply discussed at some tables but not others (What is systemic change exactly? How ‘grassroots’ does this thing strive to be? How can we be inclusive and responsive at the same time? …).

In the end it appeared that, beyond being a funding instrument, the final product might be something much broader:

a pan-European platform for activists to exchange and define a shared narrative, jointly develop ideas and find funding to implement them.

No definite answers yet but lots of anticipation and hope for the coming steps on the journey towards participatory grantmaking at the pan-European level.

Watch this space for more updates!