ECON is a hub for the community organising movement across Europe with a focus on developing the craft of organising through training and mentorship, technical assistance, and by creating a space for organisers from different countries to collectively develop their strategic practice. 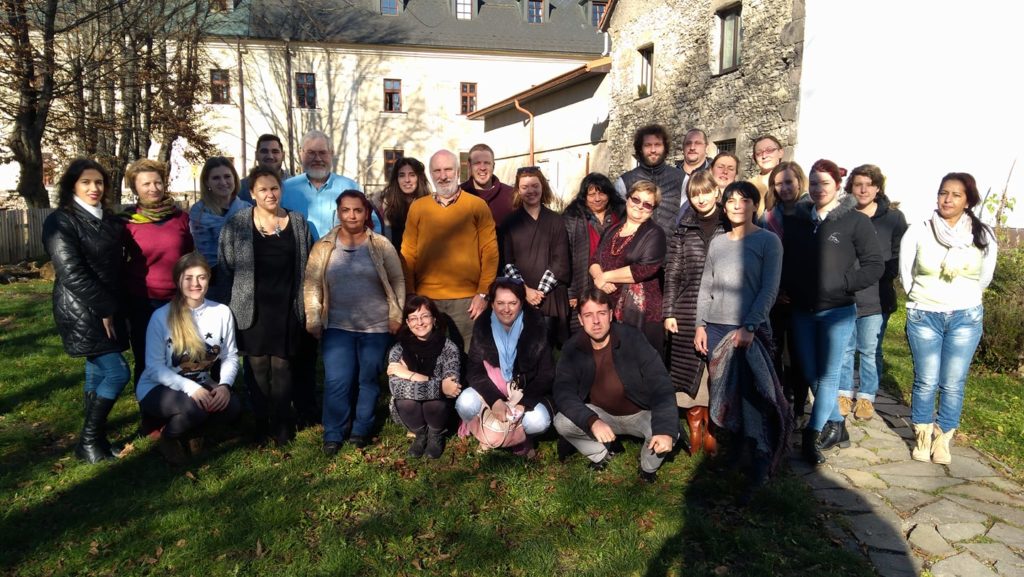 ECON supports the work of its affiliated organisations through a combination of practices designed to bring greater cohesion and a sense of deeper strategic practice to the community organising work taking place in Europe. They accomplish this by:

2) Supporting broader strategic alignment activities between organising formations in different countries: In addition to the ECON membership assembly, they invest considerable energy into the planning of broader movement building spaces such as the annual Citizen Participation University, or CPU (www.cpu.camp). 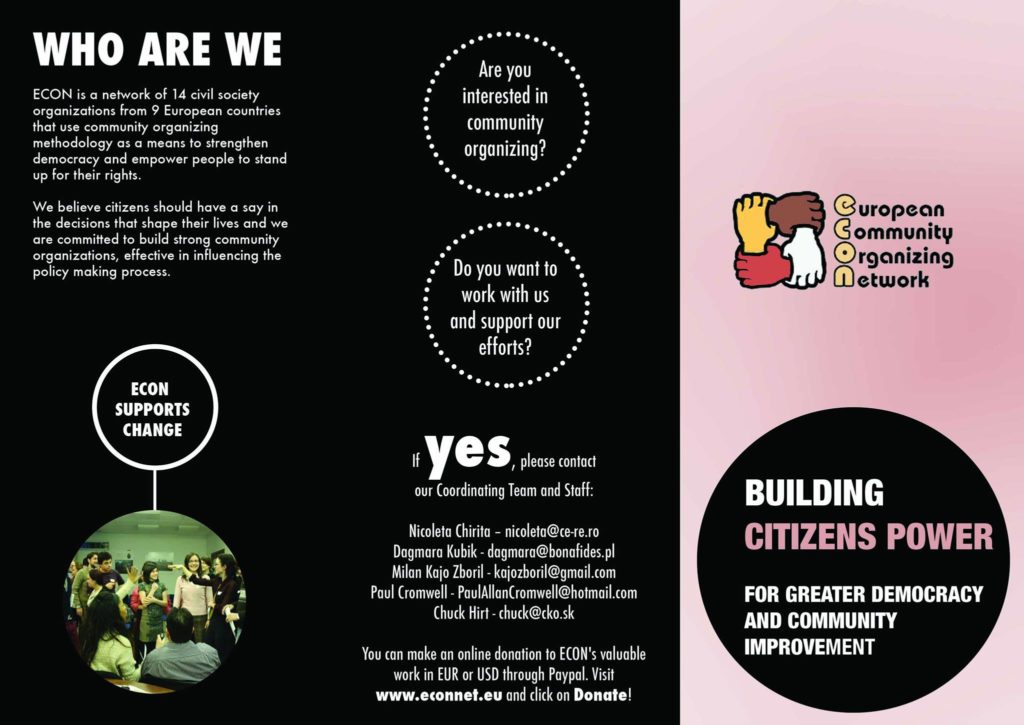 A leader from the ECON Hungarian partner organisation, the Civil College Foundation, recently said, “community organising is not a ‘methodology,’ it is an investment in a new concept of civil society.” Community organising is rooted in a fundamental recognition of existing power imbalances in society. In an earlier era, especially in the CEE region, the question of “power” was often underplayed, with civil society actors generally focusing on the basic idea of “participation” in public affairs. However, power relations did not disappear. The gold rush for resources through privatisation created a new class of oligarchs, and the seeds for “illiberal” governments were already being planted.

ECON Katowice Meeting: 70 participants from 10 different countries attended a 2 days learning seminar on community organizing. The meeting was partially financed by the European Commission through its Lifelong Learning Programme, in the framework of the “Learning Sustainable Citizens Participation” project.

Another way to think of community organising is that it is a process of “reverse engineering” power relations. ECON breaks this down as follows, “if we recognise a particular social injustice such as lack of adequate housing is rooted in a power imbalance with a large corporation that owns, or in some way controls, the cost and availability of a city’s housing supply. We likely also recognize that this corporation has huge advantages in terms of money and political connections. Therefore, to reverse engineer our way toward a situation where we can equalise or move power relations in our favor, we evaluate what pieces we need to move into place to lead a fight back. The answer is almost always that we need more people on our side — hence the often overused term “building people power.” Community organising is about identifying exactly which people we need — which constituency groups, local organisations, faith communities, local leaders — we need to bring into our campaign to address this social injustice. And then it is about actually going out and talking to them! We meet them in their homes, their offices, their places of worship. We build relationships, we identify and train leaders, and we support the building of grassroots organisations.” 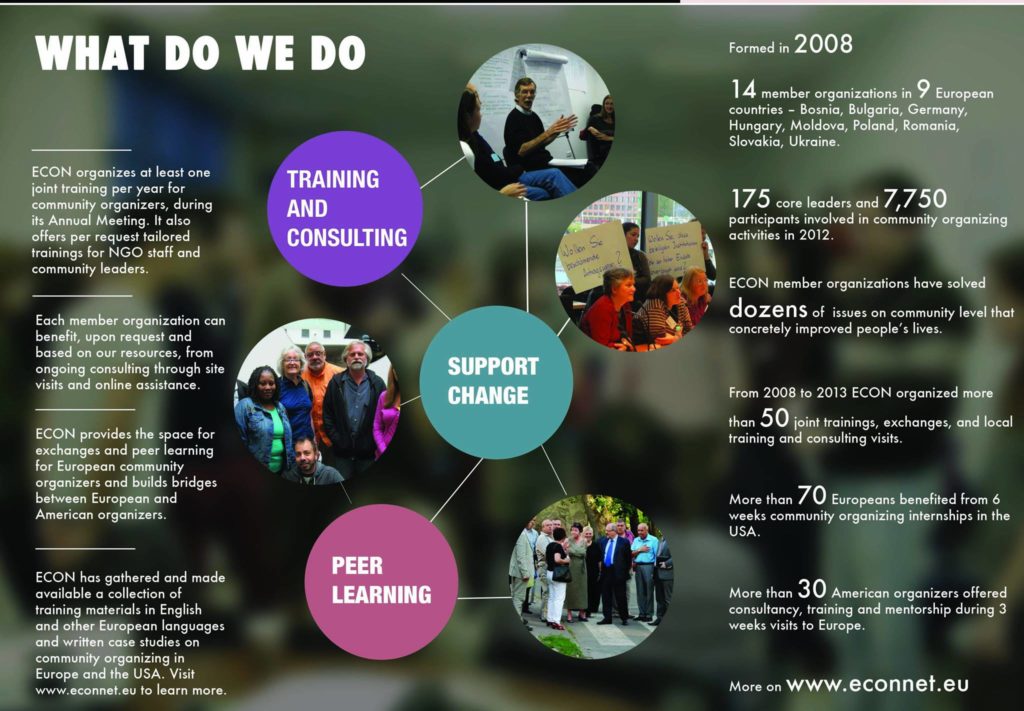 We are big fans of community organising, period. We’re also excited to see it grow and become updated and diversified as a practice for collective action and societal power shifts. We are also very excited to see greater solidarity and know-how exchange across European borders when it comes to community organising and movement building. Therefore, we are supporting ECON with core funding so that they can keep on doing their core activities with greater ease. 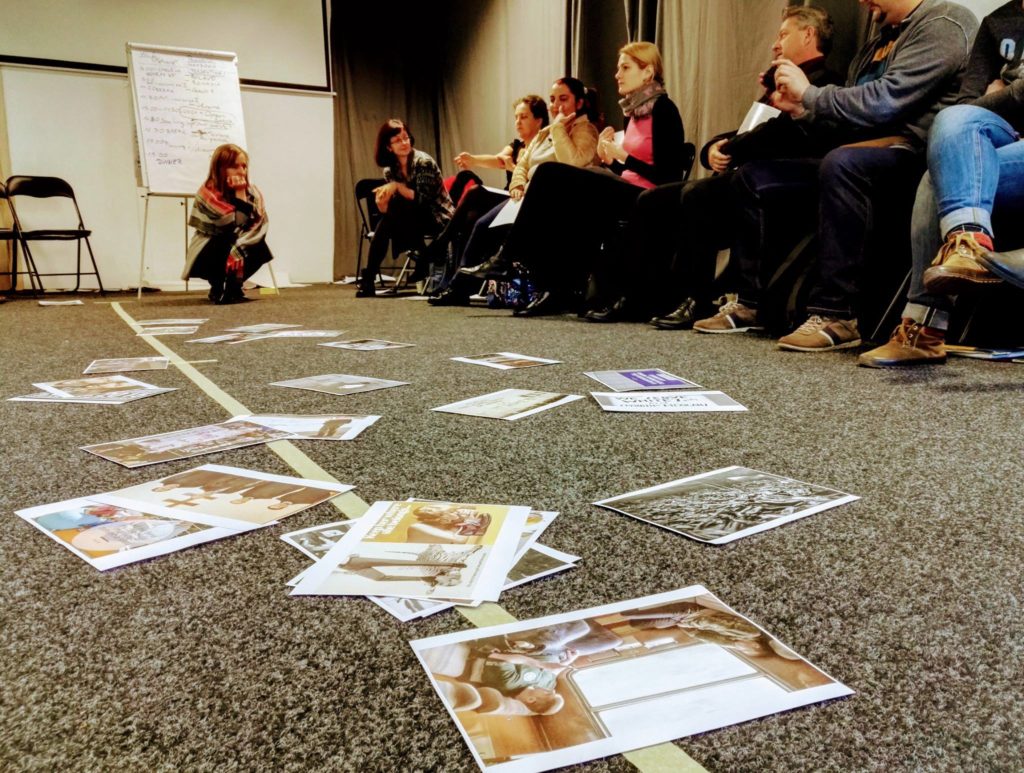 ECON’s ongoing and urgent goal is to grow and scale the community organising movement in Europe, and to build power from within marginalised communities to create an effective counterforce to the rise of right-wing extremism, xenophobia/racism, and nationalism. As they have shifted from an informal network of people interested in community organising to a more formalised organisation, they have begun to take big strides forward thanks to having some resources to invest in basic, part-time staffing. However they are still seeking additional core operating funds in order to increase the staff capacity for the coming year. They also want to ensure their ability to do sustain mentoring and training with community organisers in the field as well as to support the resource development work to provide funds for community organising at the local, national, and transnational level. So, if other funders are reading this, don’t hesitate in dropping ECON a line. 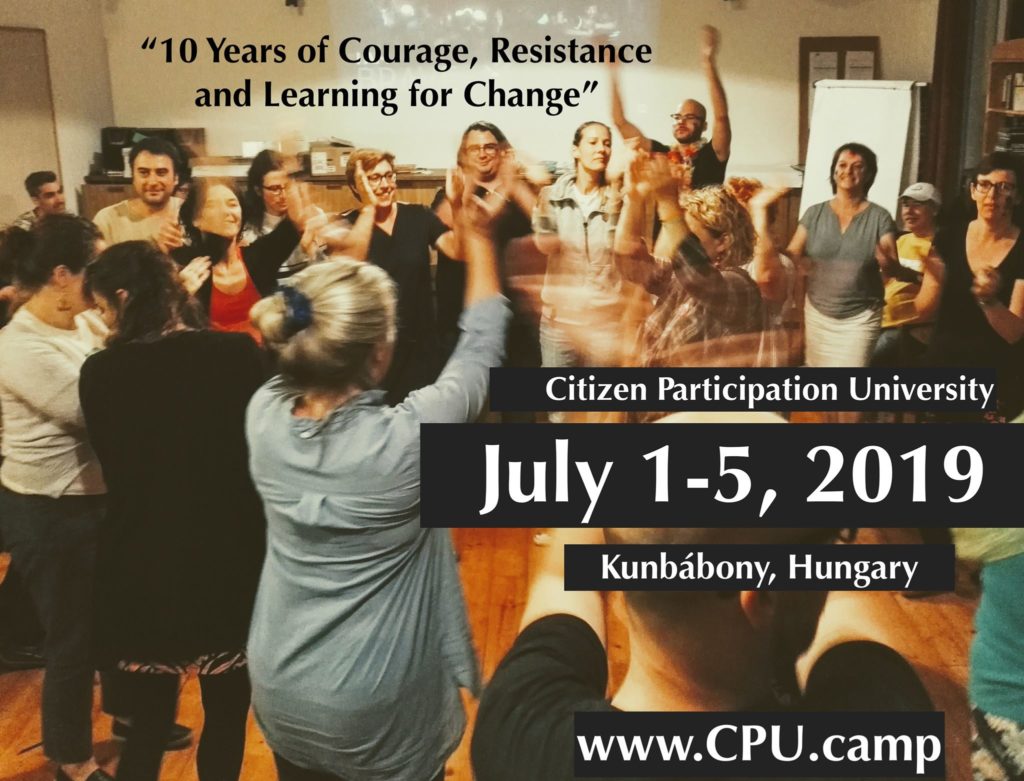