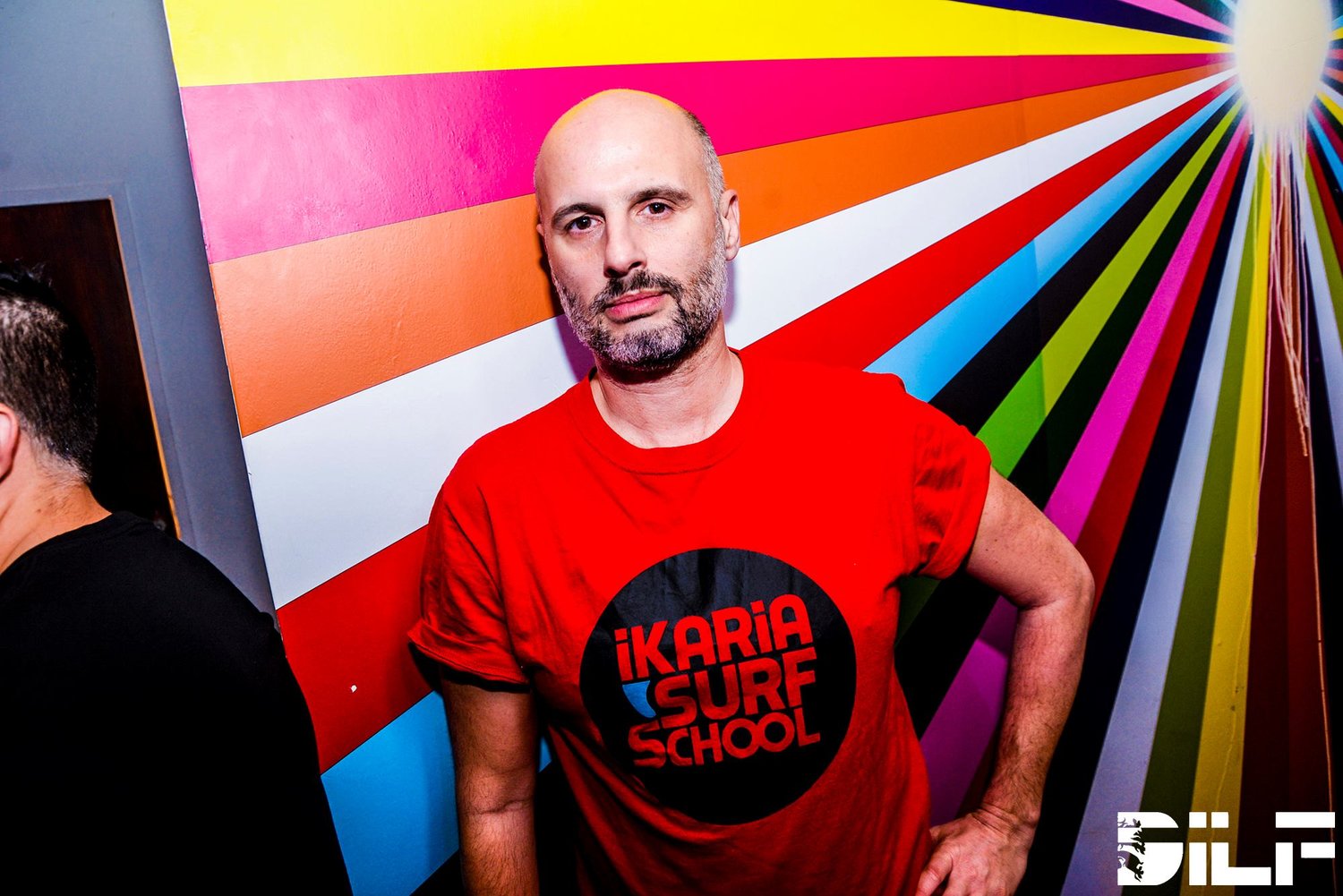 Menelas Siafakas has the best business card I have ever seen. It’s a photograph of a man standing in front of a sofa, wearing nothing but a black balaclava and seat-less boxer shorts (which expose his bare bum cheeks). He’s looking over his naked shoulder at the camera and brandishing an AK-47 assault rifle, while the text reads: “Menelas – Poet. Pornographer. Existential Detective.”

It’s an impressive skill set, make no doubt. But it barely scratches the surface of Menelas’ extensive resumé. For the last decade, he has been one of the most prolific activists and artists in Athens’ burgeoning LGBTQI+ movement. Alongside his artwork and shows, he’s always working to get things done – engaged in the largely invisible and often thankless task of organising behind the scenes.

Greece has long lagged behind the rest of Europe in terms of legal rights, visibility and social acceptance of queer communities. But recent years have witnessed enormous steps towards equality and acceptance, with legal protections enshrined in the constitution for the first time, a rolling back of the suffocating influence of the Orthodox Church over politics and society – and an Athens queer arts renaissance, to top it all off.

Taking the community to where it is today has been achieved through many big and small victories – and the combined efforts of countless people. Menelas, has been fighting tirelessly on multiple fronts. He’s the founder and curator of the annual queer arts festival Civil Disobedience; a member of the team that pursued an ultimately successful conviction of homophobic hate speech for Greek Orthodox Bishop Amvrosios, founder and co-organiser of the Queer Theatre Awards for Athens,  and is a contributor in the ongoing battle for justice after the brutal killing of Zak Kostopoulos, one of Greece’s most prominent and courageous LGBTQI+ activists, in September 2018. And he makes a lot of politically-charged but comical gay porn.

Menelas grew up in an era when the gay community was almost invisible in Greece. Studying sports science at Glasgow University in the early ‘90s provided the first opportunity to be open about who he was. Still, he felt unwelcome and unrepresented by the university’s LGB Society (as it was then). So, he took his first steps into activism by running for social convener of the society, then for the student council. 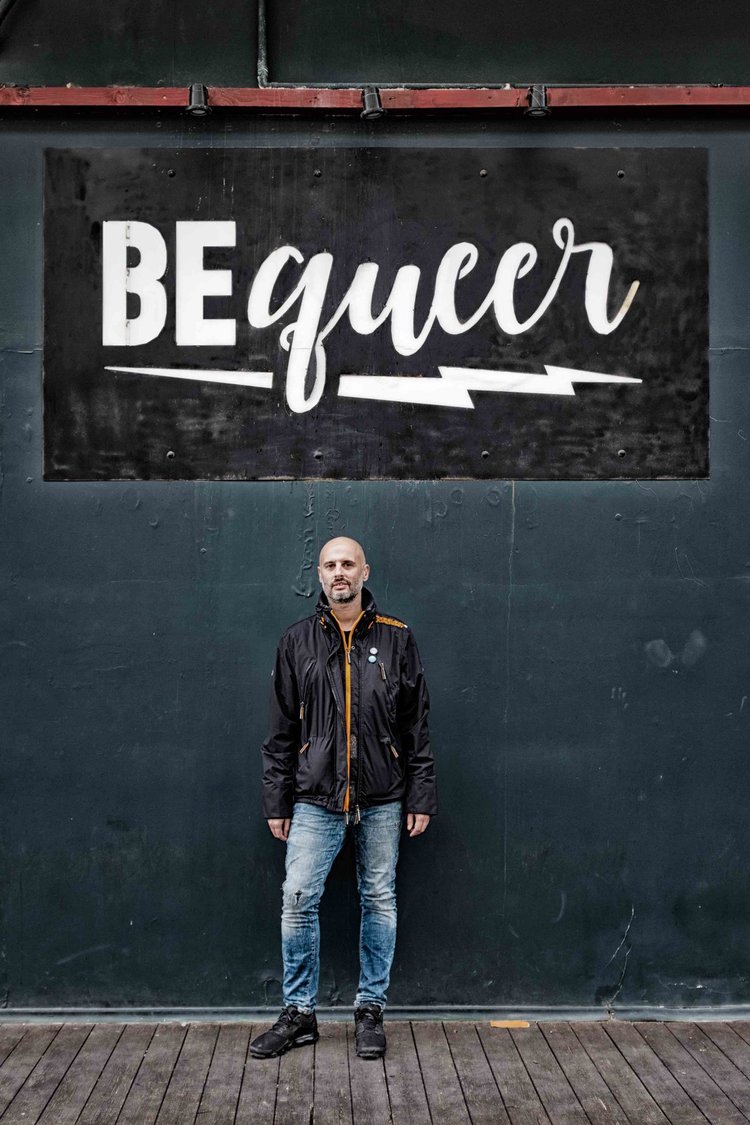 “If I see things I don’t like, I don’t just talk about them, I try to change them myself,” he explains. “Being on the student council as a representative of LGBTQI+ students was incredibly liberating for me. It was the first time I was given a position, was listened to and had responsibilities, just for being gay – with that identity.”

Menelas used his position to make the society more open and welcoming. He expanded university Pride celebrations from one day to a whole week, using everything he could think of to engage different types of people; from workshops, debates and parties to sports events and even a sponsored run for an HIV charity. But, perhaps, the most valuable lesson was the power of working with individuals.

“I would meet and talk with people who were coming out and were too afraid to join the society,” he remembers. “For me, that is still very important. People don’t realise you can make a change just by helping one person. Making someone feel comfortable in their own skin, making them feel heard and that their needs are real and understood. That can be activism too.”

When Menelas finally returned to Greece in 2009, he only knew one other gay person. Homophobia was rife in politics, in the media and on the streets. Politicians would rather pay fines than implement obligatory European-level human rights legislation, so queer people had barely any legal recognition or protection. While Athens Pride today draws crowds over 80,000, then it was tiny. “The community was in its infancy, but growing,” he says. “I was angry about how far behind things were. No one is going to give us rights. We needed to have more guts to ask for everything we wanted. Tsaboukas (greek sland for gumption & pushiness) – let’s go out and kick some butts, because otherwise nothing’s going to happen.” 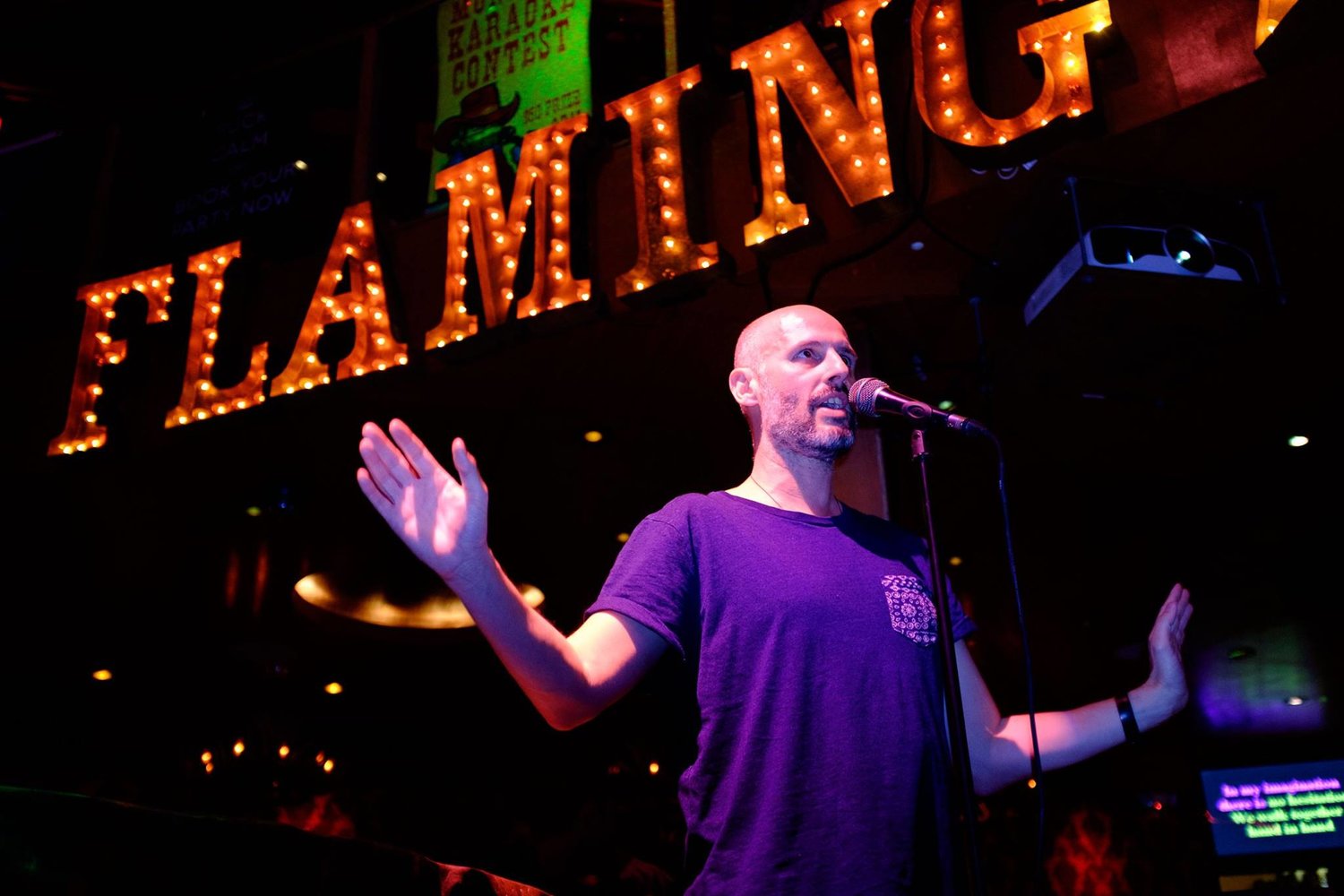 With the election of Syriza in 2015, the queer community finally had a government that would listen to their demands. They passed same-sex marriage legislation and a gender-recognition law, which provides protections for trans people – despite huge resistance from the church, who said it would “destroy human beings”.

Of course, it’s an oversimplification to blame them for everything, but the power of the Orthodox Church is a significant reason for why Greece remains one of Europe’s most socially conservative countries. In order for deeply entrenched beliefs to change – particularly with regards to homophobia – the church has to be confronted. Menelas was part of a team who made history by pushing for the prosecution of Bishop Amvrosios of Kalavryta for incitement to hatred after a homophobic rant, which included advising followers to “spit” on gay people.

Homophobia is still all too evident in Greek society, but after a string of victories, there was a sense that things were moving significantly in a positive direction. Yet, the fatal beating of Zak Kostopoulos, in broad daylight in central Athens, by a shop owner and police, shattered many illusions.

Zak performed as the much-loved drag artist Zackie Oh! and was the first to announce publicly that he was HIV positive. To date, we don’t know why Zak was killed. But the media reported the story as: ‘HIV positive junkie robs jewellery store and is killed by owner in self-defence.’ They highlighted polls that suggested the public supported killing ‘robbers’ and that a third of the population would not want to live next door to a gay person. After people left tributes, members of Golden Dawn set fire to everything left at the site of Zak’s death and marched around Athens shouting: “Junkies and gays you’re not necessary.”

“No-one knows how this happened and it affects everyone differently,” Menelas told me at the time. “But we want the truth. And we want justice for our friend Zak.” Menelas is one of many working away in the background; talking to the family, lawyers and organising fundraising for the legal challenge to hold those responsible to account. 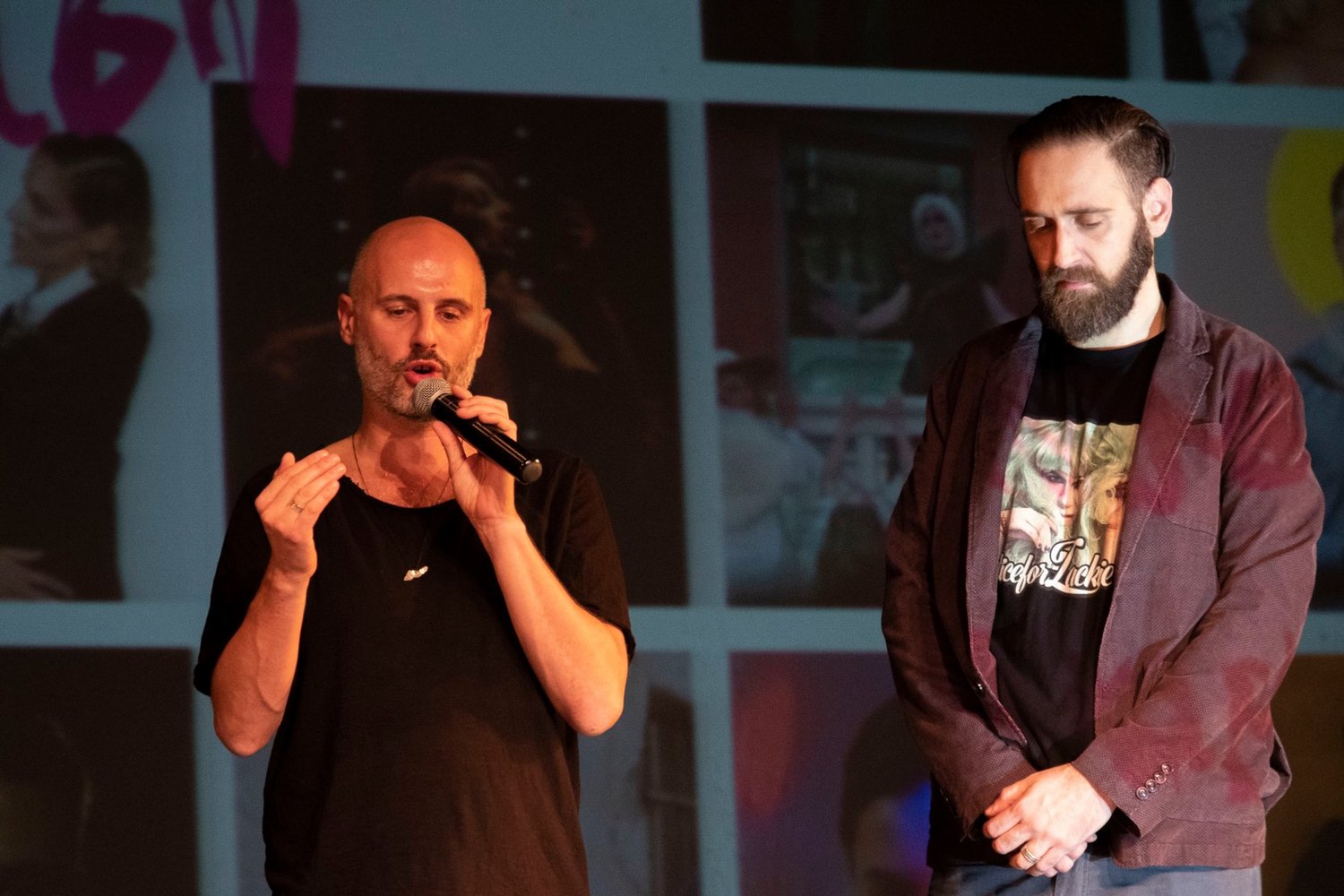 The strength of mobilisation in condemnation of Zak’s killing has been unprecedented. In large part because of Zak’s commitment to multiple struggles, from HIV awareness to promoting LGBTQI+ education and refugee solidarity, anger at his death has energised the movement and helped develop bridges of solidarity with other progressive communities; from anti-state violence activists to migrant rights defenders.

Artistic tributes to Zak have come from many quarters. Menelas used his ruckus Drag Queens Read Homoerotic Poetry event to honour his memory during the latest edition of Civil Disobedience. He’s also leading efforts to canonise Zackie Oh! – in large part as a middle-finger to the Orthodox Church.

After sustained pressure through legal channels, in the streets and in the media, the office of public prosecutors recently announced they would be taking action against six of the police officers involved in the killing. There’s still a long way to go before anything like justice is achieved, but it’s a significant step in the right direction – and for Menelas, one of many fronts to continue fighting.

“In Greece and world-wide, we need to keep pushing for representation and education,” Menelas explains. “I want our history, our views and our struggles to be part of the school system. I grew up in a generation that felt isolated and invisible. A huge change would be to implement structures in schools that recognise our existence and our right to exist.”

This article was first published on TheRadicals.org