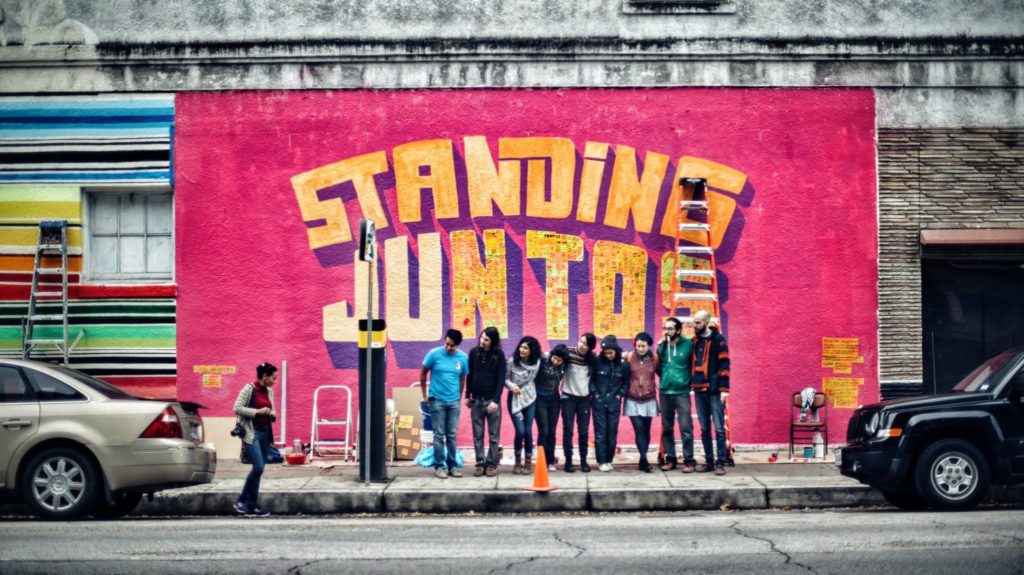 The Rules team & friends painting a big wall in Austin TX with mexican-american collectives. “Standing Juntos”, standing together, a tribute to those who defend life. Standing together for the water protectors, the immigrant community, people of color, LGBTQI & all those that resist.

The Rules (/TR) is a global network of activists, writers, researchers, artists, designers, hackers, and others focused on addressing the root causes of poverty, inequality and climate change.

They try to help bring more progressive and radical ideas into the mainstream to counter the ideological hegemony of late-stage capitalism. Their focus is on popularizing alternatives to the existing economic system. Through their in-house think tank, the Culture Hack Lab, they have created a new multi-disciplinary approach that brings together the latest tools from memetics (from memes, the cultural units of genes), cognitive linguistics, evolutionary theory, complexity science, behavioral psychology, and other disciplines. In addition to their narrative work, they work directly with social movements in order to unite disparate groups to spread these new narratives at critical cultural moments.

“Without ceasing to care about the 100 small causes that have animated us in the past, the one big cause that needs to animate us in the future is a systemic project of transition beyond capitalism. The Rules has been doing this work behind the scenes since the end of Occupy.” – Paul Mason, journalist

In order to achieve their mission, The Rules theory-of-change has three aspects:

They start from two core insights: Power rests on the ability to harness and control language; and humans make sense of their world through stories. The Culture Hack Lab, combines big data analytics with cognitive linguistics, memetics, anthropology and social psychology to makes sense of and then intentionally engages in the narratives that support the global transition to a post-capitalist world. They create content, analysis and tools to help bring more radical ideas into the mainstream (e.g. post-growth economics, co-operative ownership structures, alternative currencies, universal basic income, regenerative agriculture).

The team works in service to the world’s leading non-violent social movements and civil society organizations to unite seemingly disparate struggles, to build capacity among these groups, and to deepen an international community of solidarity. Through their Activist Ashram, a year-long fellowship for frontline organizers, they convene activists from around the world to: (1) better understand the logic of the global economic operating system; (2) create shared language and tools; (3) and help contribute to the emergence of a new type of sacred activism.

3) Prototyping for the Future

We recognize that our ability to overcome the current global system is dependent on the degree to which we can imagine and create alternatives, and to this end we create working open-source prototypes to shatter the illusion that “there is no alternative”. We have built a global network of issue-area experts and journalists, through our Alternative Narrative Network, to spread awareness of these prototypes and help expand the Overton Window, the realm of ideas that the public deems possible and acceptable. 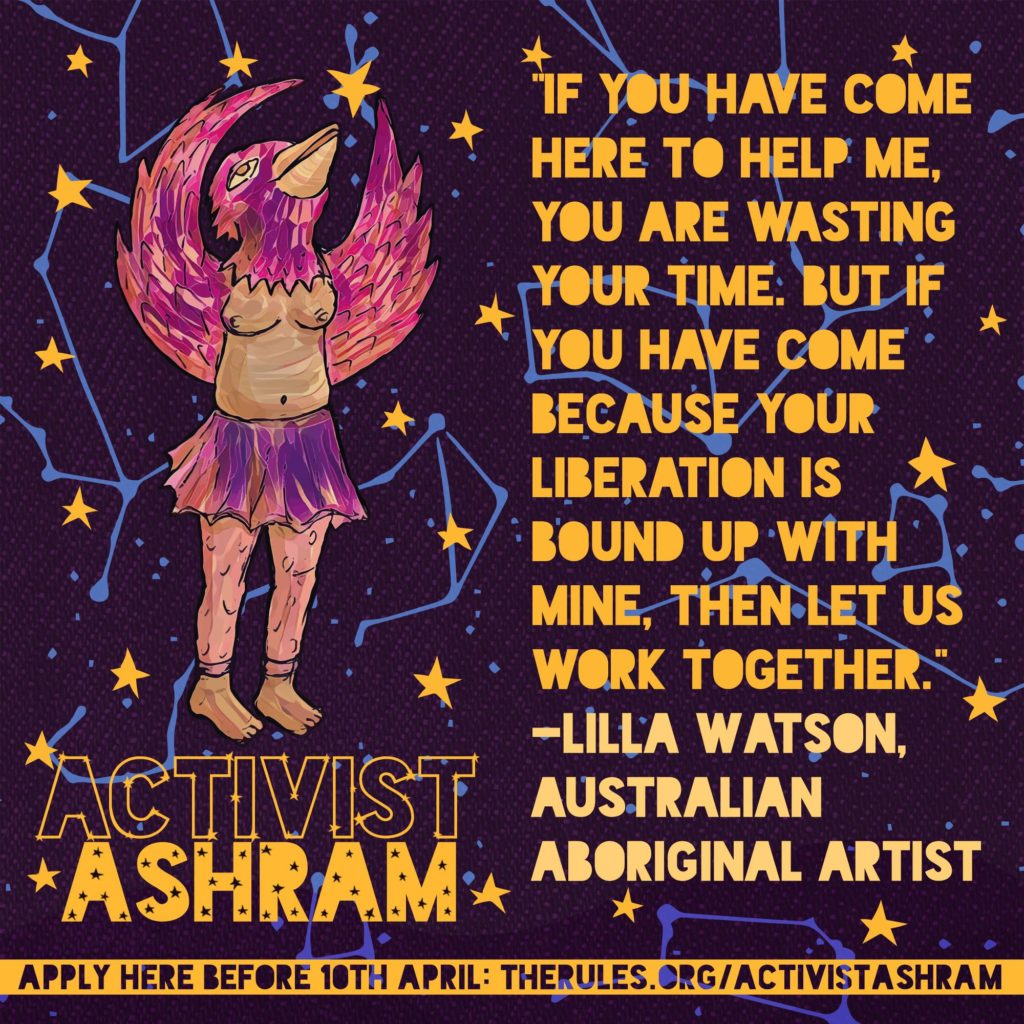 /TR have cultivated an online community of about 200K people who are interested in their work. Their social media audience is at around 150K people with a very high share rate on their stories.

Through the Activist Ashram network, they have a field organizing community that help spreads key messages and campaigns. For example, Ekta Parishad, the landless people’s movement of India, represents over 200 million Indians and has a field organizing staff of 150K volunteers.

They also work extensively through the Alternative Narrative Network, which is now over 300 journalists in key outlets from the New York Times to the Times of India.

As a result of these networks, /TR articles, content and stories have had widespread affect. For instance, their two part series in Fast Company has been read over 1.5 million times and the first article was the most read article on Fast Company for 2017.

Also, The Rules inequality video has been viewed over a million times and has become a part of the curriculum at Harvard, Oxford and other higher education establishment institutions:

The Rules are in the midst of their narrative/meme campaign around Universal Basic Income, re-contextualizing the basic premises of the debate to focus on decoupling humanity from ‘bullshit jobs’ and the tyranny of GDP growth. If implemented through a community-based crypto-currency, UBI could provide the basic means for living for the majority of humanity, while reducing globalized consumption and creating strong, resilient local economies and communities. The Guerrilla grant goes towards supporting this campaign.

/TR will bring together leading edge tools for community organizing, mapping cultural memes, empowering storytelling, and technology-enhanced social networking. They will synchronize the launch of an alternative narrative with a major cultural moment, convening and coordinating disparate groups for a synchronized ‘media hack’ that will include civil society organizations, grassroots social movements, think tanks, journalists, artists, and others.

Some example memes from The Rules UBI Campaign #ImagineUBI

​In order to amplify the ideas that come out of the CHL, they have created the following pieces of infrastructure:

1) Communication Hubs: These will be virtual entities, centered around existing partners (social movements, CSOs, think-tanks, our existing Activist Ashram fellows, volunteer network, etc.) who will organize the re-packaging, translation and dissemination of centrally-produced content, as well production of original content based on their own work, and that aligns with The Rules’ core narrative framework.

2) Community Development: This will consist of growing the size of the community of people they are connected to via email and social media. The objective is to help foster an active network, that is engaged in the production and dissemination of memes and content. Some of the more highly engaged members may become members of communication hubs, but they expect the majority to remain simply part of the wider network.

3) Influencer Network: They will expand and cultivate their network of progressive journalists, writers, and public intellectuals into a standing army of influencers willing to amplify key memes at particular moments in their lifecycle. 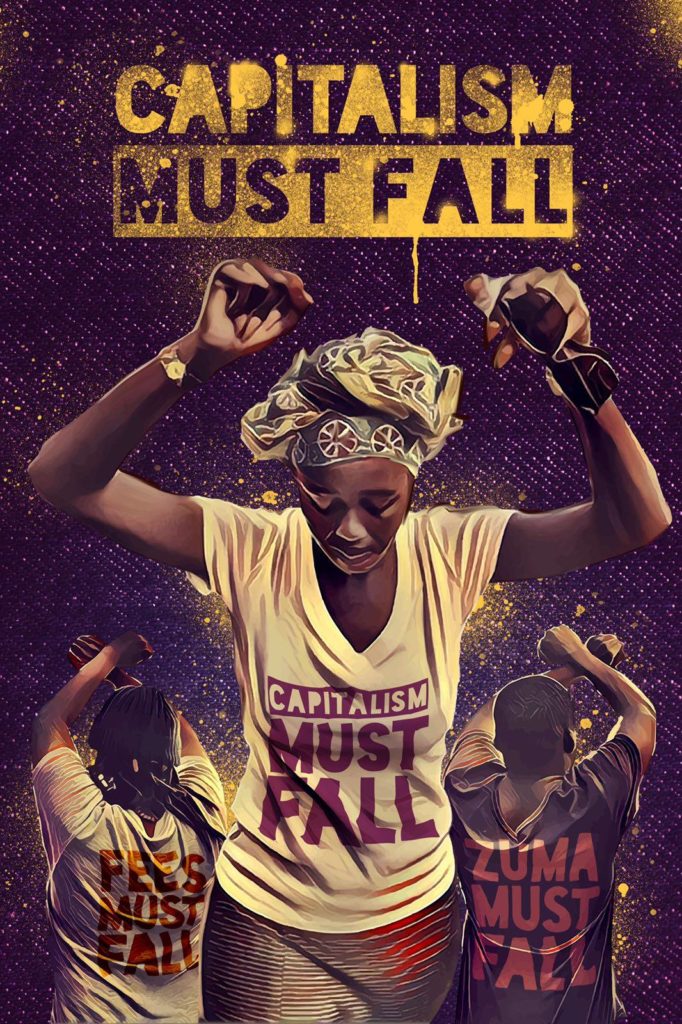 The parting thought (statement?) we leave you with…

There are few ideas around today that can match Universal Basic Income for pure potential. It is garnering support from across the political spectrum, and around the world. There are pilots in countries as diverse as Canada, Namibia, and Iceland. Results, where they exist, are almost uniformly positive. In the Namibia pilot, for example, poverty, child malnutrition and crime all went down, while educational attainment, healthcare use and economic activity all increased. The practical projects are important, but they are only one side of the equation. Without a supportive public, the idea can only move so far. Right now, the idea is not breaching the mainstream public sphere. This is, in part, because the narrative is trapped in frames that drag it down, and make it less inspiring than it could and should be.

The Rules’ conception is on the radical end of the spectrum of those being considered, in order to allow people to engage ideas around work, money, and power, through talking about UBI. Their approach to narrative is such, however, that any transformational narrative we can construct should be of benefit to all groups working on UBI. Socializing and evolving the core narrative of transition is essential. However, to really fire people’s imaginations, we need the support of practical alternatives to the current system. It is through seeing the potential of concrete, positive alternatives that people will be able to fully connect with and internalize the idea of a post-capitalist way of life.