Coming Back from the End of the Road
by Antonis Schwarz

A Diary Entry from a Coal Mine Occupation

Being in the field of philanthropy for several years now, it is astounding to see the level of passivity one can fall into over time. You start off the journey bursting with enthusiasm, and then after just a couple of years you discover that your role has become more or less limited to reading applications from prospective grantees, giving some feedback and then expecting to have a nicely written report about how successful this or that donation was, potentially together with a note of thanks. Philanthropic engagement becomes like choosing your meals at a restaurant instead of foraging for nutritious veggies, dicing, marinating, baking and getting your hands covered in both mess and deliciousness. 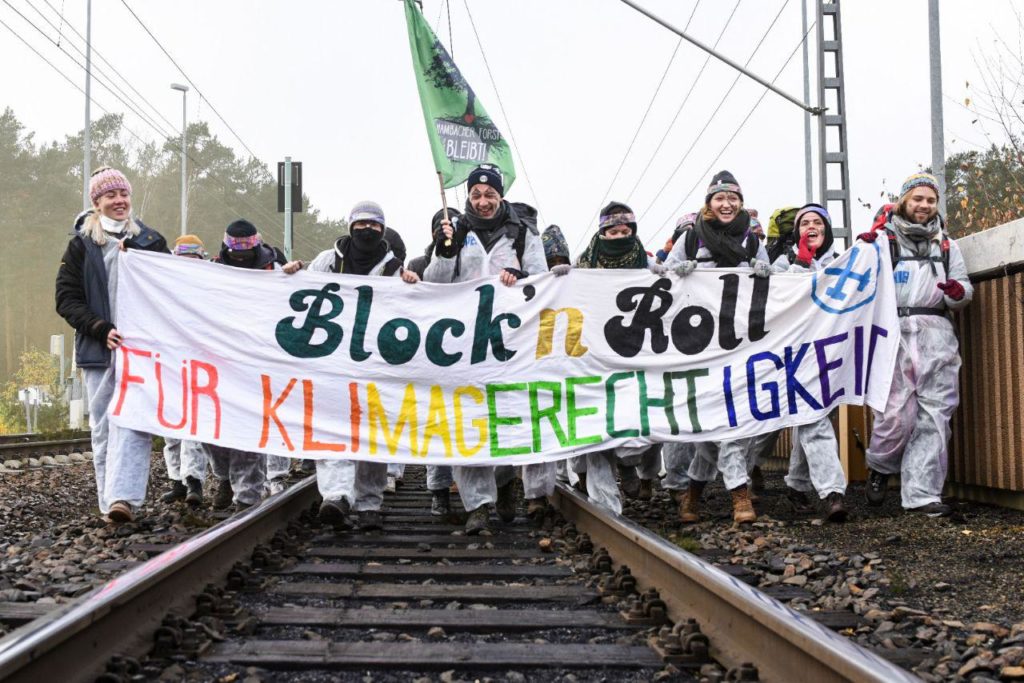 This November I decided to get back out into the world and one of Ende Gelände’s mass civil disobedience actions, was the perfect activist adrenaline therapy.

In Europe there are very few philanthropists that focus on funding social movements and I’m pretty certain there are even fewer that actually engage with these movements. Having gone to many conferences where there is much talk about changing the world yet very little action, I had to see what it feels like to engage in a form of protest known as non-violent civil disobedience. 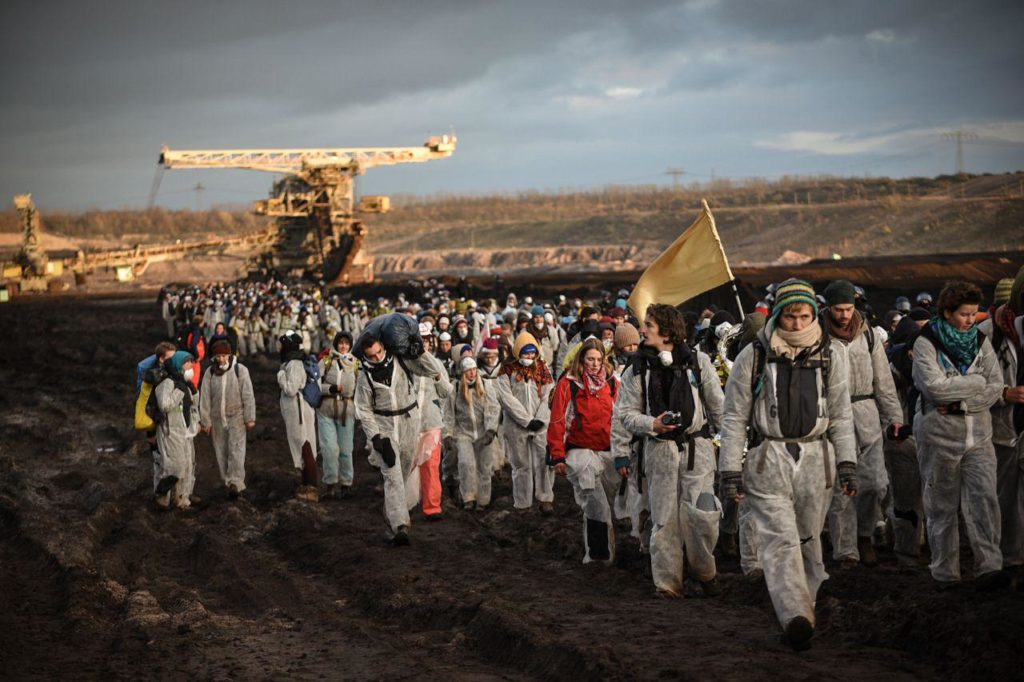 In Germany in 2015 a new movement emerged that focused on (illegally) entering coal-power mines to peacefully block the infrastructure using activists’ bodies. This movement is known as Ende Gelände, which could be loosely translated as “end of the road”. The movement, through their blockades achieved massive media coverage with activists in the white paint suits becoming their signature look. Ende Gelände, together with the occupiers of an ancient forest (Hambacher Forst), which is supposed to be cleared for the expansion of a coal mine, arguably played an important part in the decision of the German government in January 2019 to end coal power by 2038.

Yet the movements very correctly pointed to the fact that a coal phase out by 2038 is way too slow. Hence Ende Gelände kept the pressure up and even increased it. In June 2019 again thousands joined the mass civil disobedience group to block coal infrastructure in the Rhineland. Their last action in late November targeted the Lausitz coal region between Leipzig and Dresden, home to one of the largest and most polluting coal power plants in Germany. 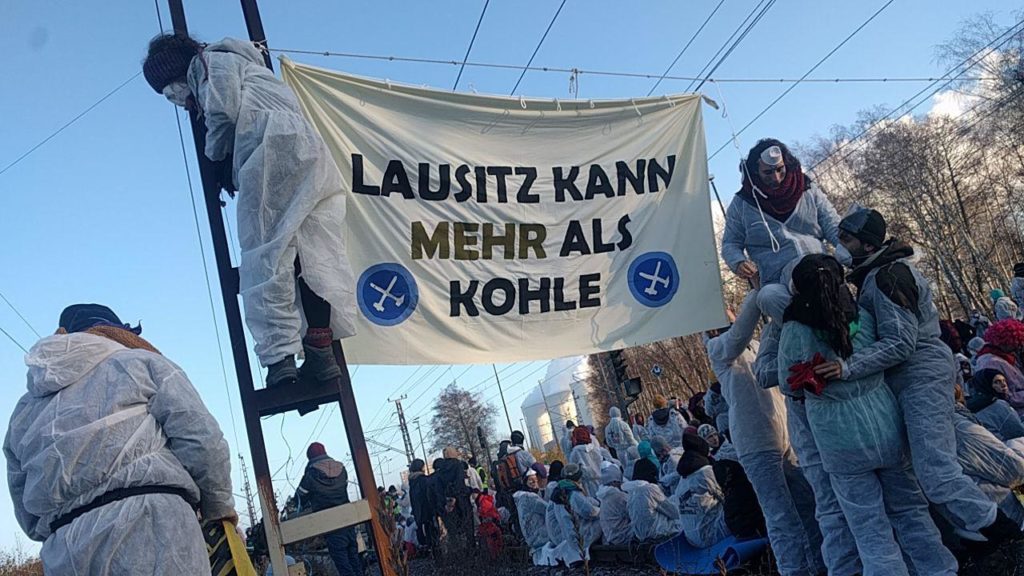 The run up to the action in the Lausitz area consisted of running workshops across Germany to teach people how to take part. This included learning how to break through a police line peacefully and what the legal repercussions of the action could be. Busses where organized that transferred the blockaders to the cities of Berlin, Dresden and Leipzig. I found myself in a bus to Dresden that started in Munich at 8a.m. and only arrived in Dresden around 4:30p.m. the same day. As soon as we arrived, we entered a large building that used to be a ballroom hall. Here we received the last instructions and practiced walking in a large formations known as a “fingers”. Probably one of the most interesting parts was seeing how such big groups could be organized without the use of microphones. We learned for example how to spread a message through the finger very quickly just by whispering a message to our neighbour. People from all across Europe had gathered to join the blockade the next day. Everyone I met was calm and joyful. I on the other hand was extremely anxious about what awaited us the next day. That evening I had grave doubts about actually joining the blockade. 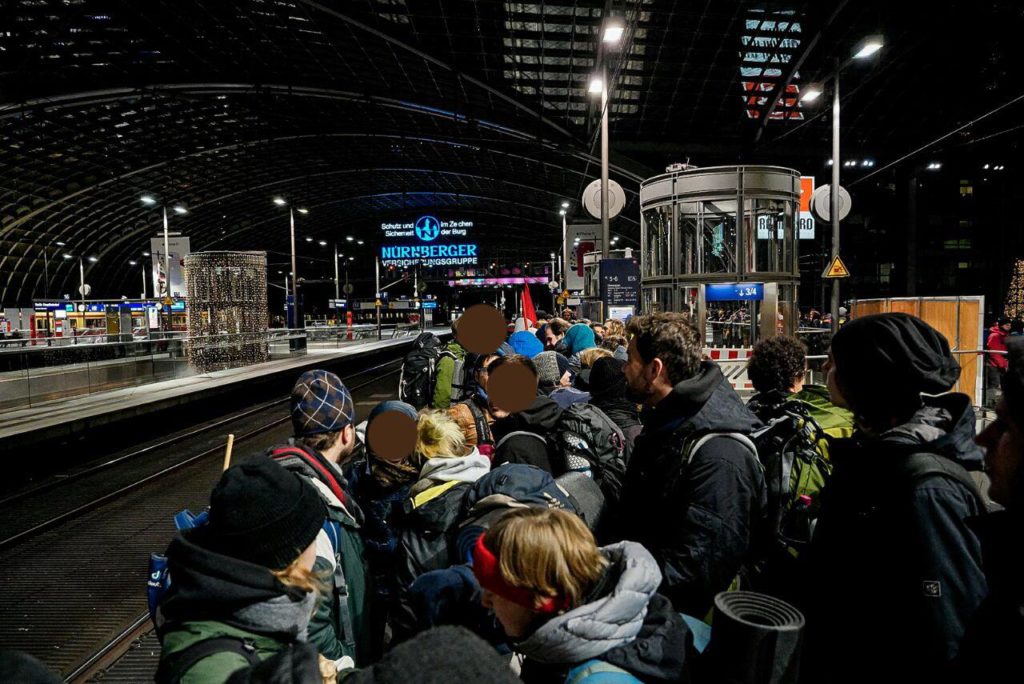 Trying to fall asleep that night, I tried to weigh the pros and the cons. On the one hand there had been threats by neonazis and coal supporters from the region to attack the activists. Police brutality was also a major issue. In past actions water cannons, pepper spray and other forms of violence were used to suppress the actions. Finally, temperatures had dropped to freezing and I feared simply being very, very cold. On the flip-side stood my conviction to stand up for my values and walk the talk. I decided to take the plunge, locked my backpack at the train station the next day and join the busses that left around 6:00 a.m. to the coal fields. In the bus I saw children that were only about 13 years old, proving yet again that there is no age limit in taking a stand. 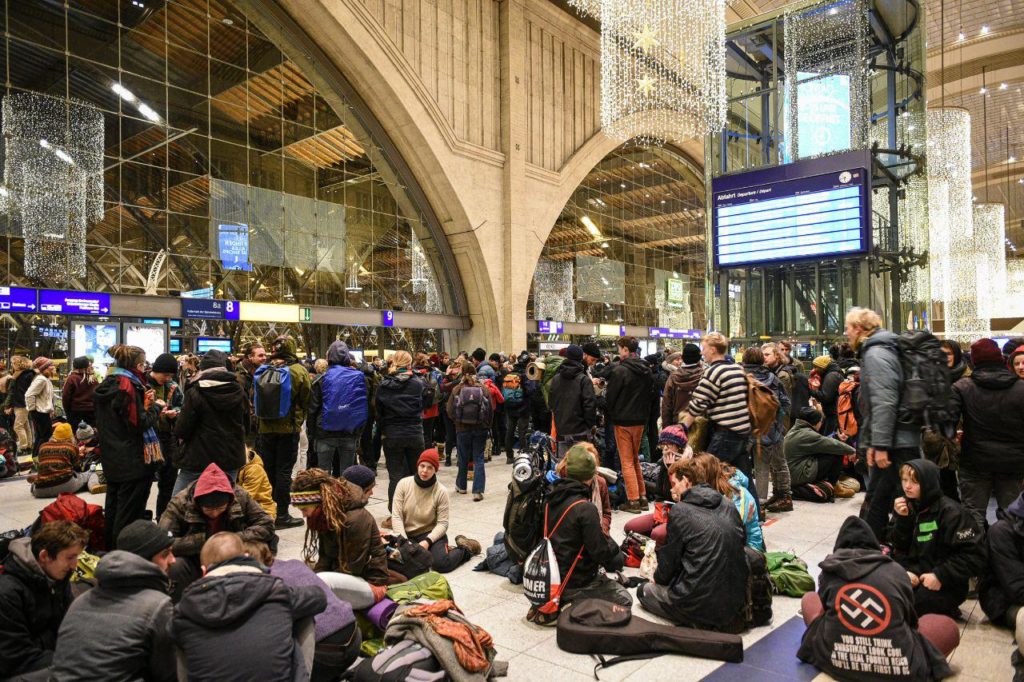 We drove for more than an hour. As it turned out, the organizers had instructed the bus drivers to take a route that tricked the police into believing we wanted to enter a different coalfield. Taking more hidden roads, we arrived at the coalmine Welzow-Süd where we quickly exited the bus and started marching. As we marched and sang songs we very soon reached the fence of the coalmine which we crossed with ease and entered the coal mine. Going down massive ramps into the coal pit and seeing the surreal landscapes of endless kilometers of craters it was is if we were on the desolate surface of a dystopian dimension ravaged by extractivism.

Our euphoria came to a halt when the first police squad (without helmets and seemingly very relaxed) showed up and prevented us from walking further. What would happen now? After a couple of minutes a whisper went around that with the sound of a whistle we should turn right and descend a small hill. The whistle went off and we charged down the hill going deeper into the pit. The police was not amused and soon came vans with the riot squads to try and prevent us from walking any further. 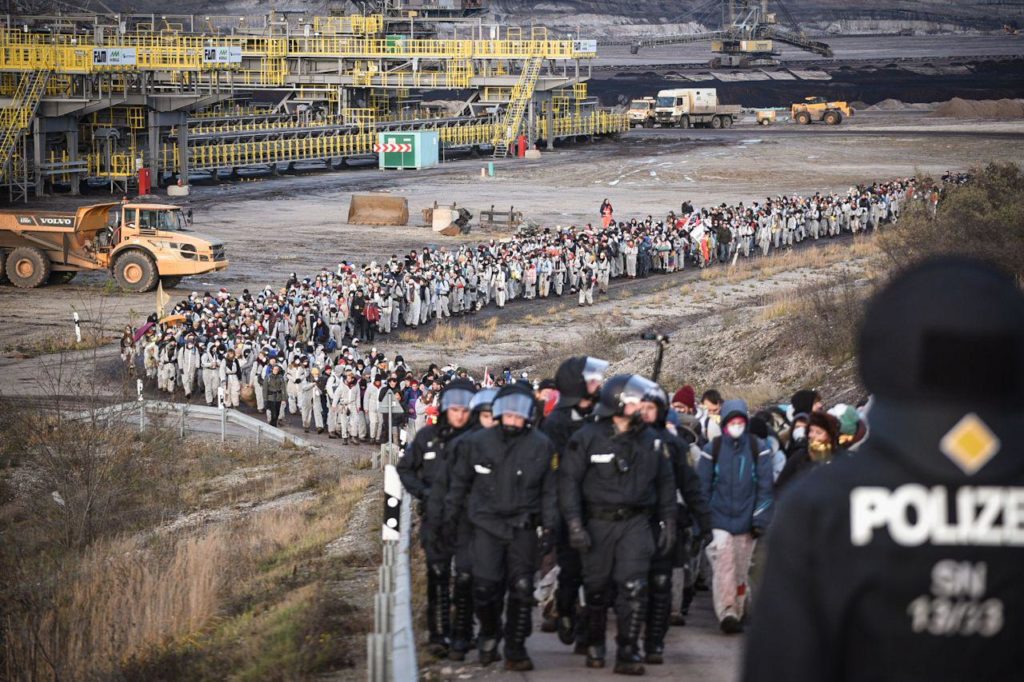 This time, the police warned us that force would be used against us if we tried to walk further. We managed to get through this second blockade where the police forcefully held down some activists, yet to my knowledge no arrests were made. After making it through the second blockade, the riot police tried to walk faster than us to create a third line. As the officers walked passed me I saw they had pepper spray and batons ready. The police formed the third line, but we eventually made it through. To my surprise, I was one of the first to pass the final line and was not hit by a policeman who could have easily done so. Instead I was only gently touched. The policeman next to me wasn’t so nice. He kicked a fellow activist with full force into his shin. 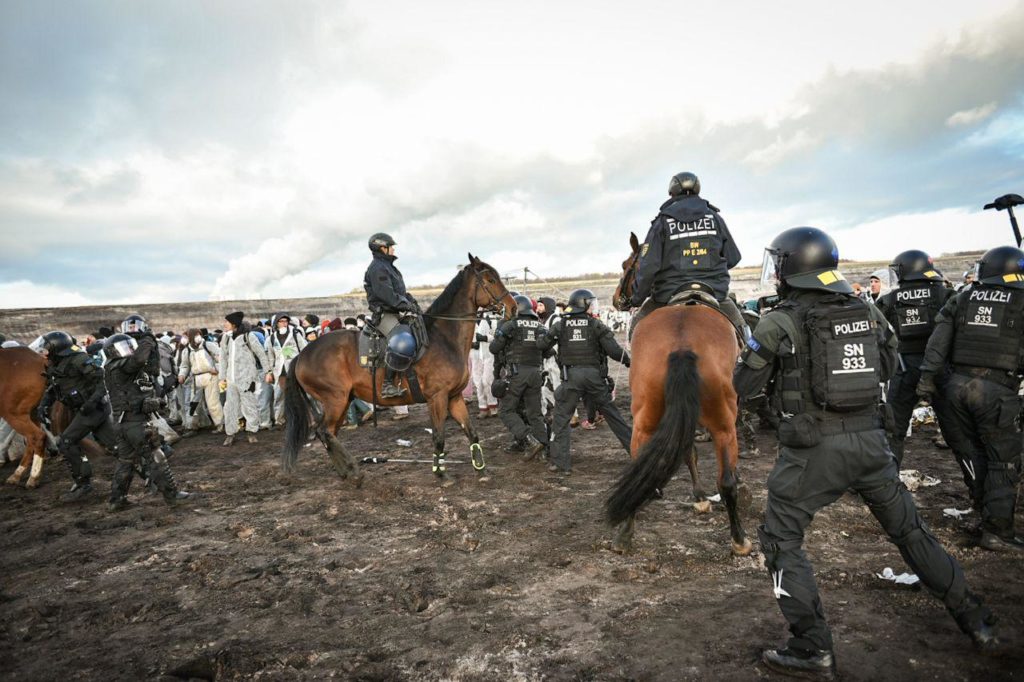 We finally made it to a large digging machine yet stopped short of going onto it, since the police came after us fast and blocked the road ahead. A quick plenary was held where delegates from various groups decided that we should stay here and hold a blockade for the next couple of hours. Our finger made as big a circle as possible and sat down. A band in the middle of the blockade started playing to lift our spirits. As the cold became our biggest enemy, many started to dance to the drumbeats to keep warm. The spirits were high but the big question was how the situation would unfold. 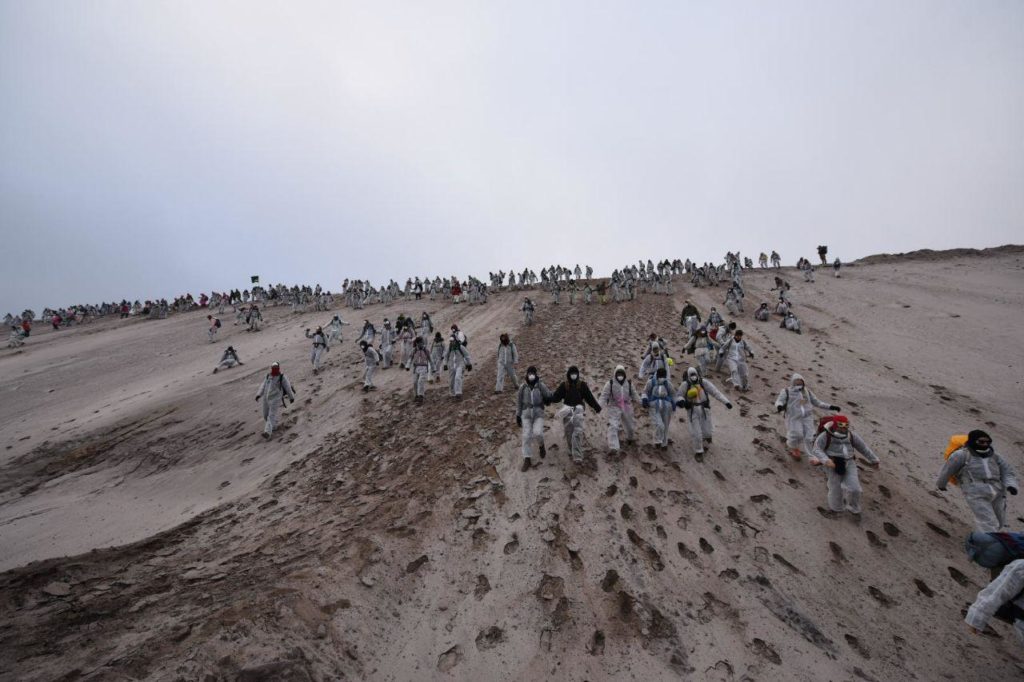 Would we be taken to a police station and kept for up to 12 hours as law permits? Most activists had not taken any ID with them and pinched the upper layer of their fingertips with a needle so police could not identify them by their fingerprints. Activists with jobs or wanting to work as civil servants particularly feared severe repercussions that could lead to not being able to work for the state. The legal implications of participating in this action meant pretty much everyone gave themselves fake names. For most, it also lead to a mild sense of paranoia. You could not say where you are from, where you work or study or if you had already participated in such an action before. Everything that you say could be used against you and you couldn’t know if the other person was an undercover cop. 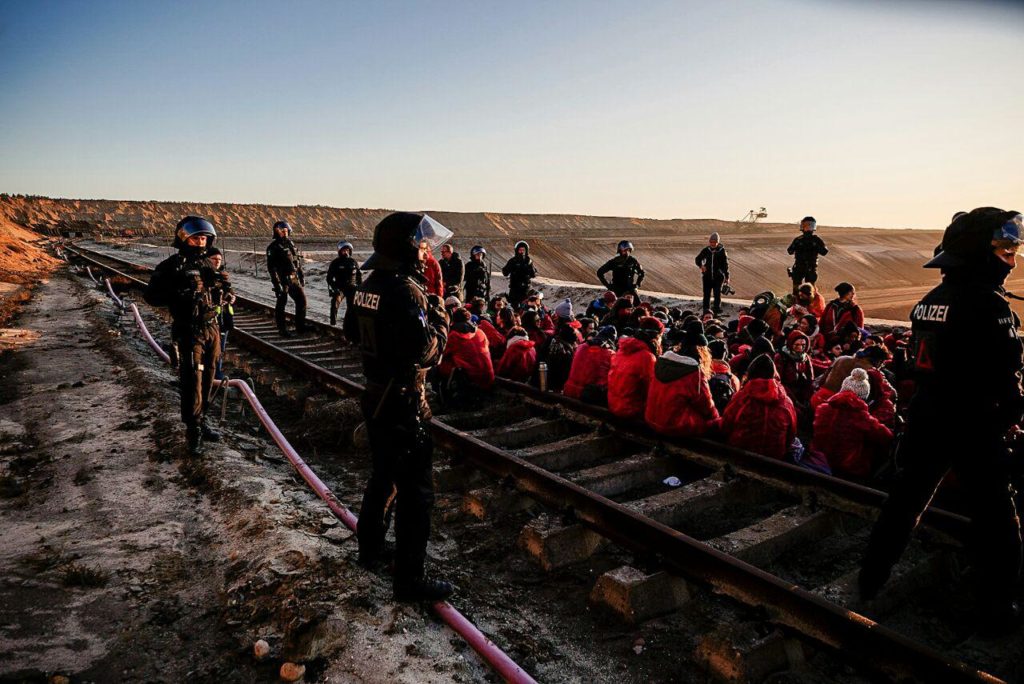 What would happen now? After several hours into the blockade the police and the protesters together decided that it was time to end the blockade. Like as if it was the end of a play, to the surprise of all, the activists were picked up by busses and were allowed to return to Dresden without any personal details being taken. I managed to leave the blockade a bit earlier by foot together with two other activists. It was a surreal feeling to be in a perceived blockade (which was technically not a blockade since we were free to leave) and simply walking away. On our way out some police officers actually greeted us and showed us the way. When we finally made it out of the mine about ten Ende Gelände supporters greeted us with cheering and offered us warm tea, juice and cookies. Some press was also there and eagerly wanted to get information from us, including how to enter the coal mine. Of course tons of police remained nearby. 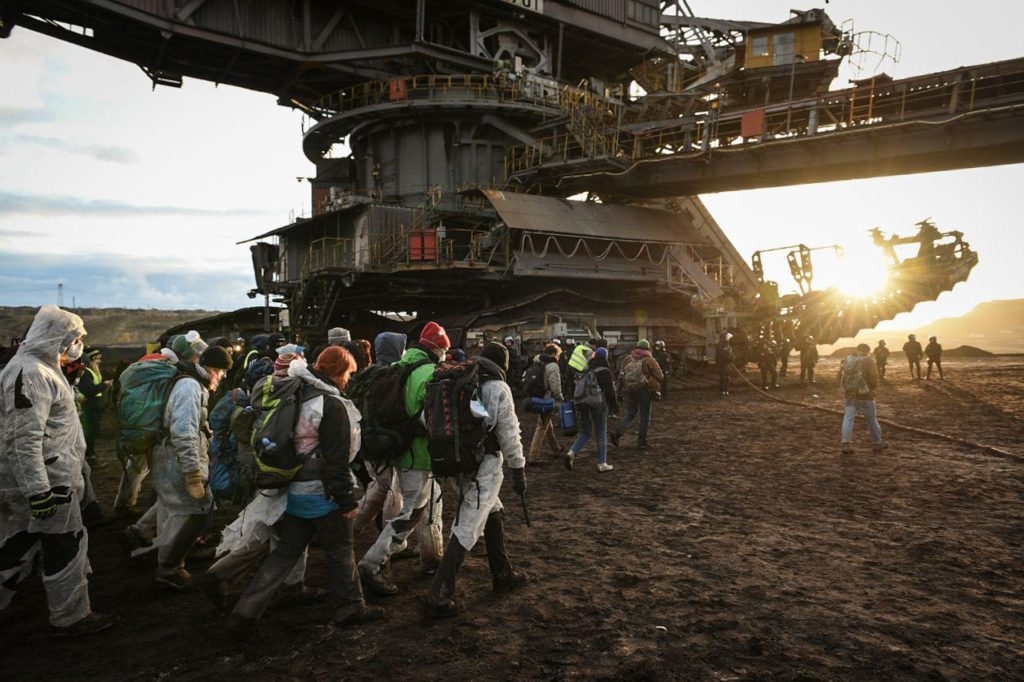 I felt celebrity euphoria for a moment when we entered our car and left without any trouble. Yet when I arrived at a bus station without the white paint suit, I was just another person again. I then took a bus from Hoyerswerd and then a train to Dresden. From there I took the train onwards to Munich where I finally arrived just before midnight – quite exhausted. I had managed not to get beaten, convicted or catch a cold. And the action received massive coverage in the German media, meaning we had achieved our overarching goal of helping mobilize public opinion for a quicker coal exit. A feeling of deep fulfilment went through my body as I reflect back on this experience. I had managed to jump over my shadow and stand up for what I believe in. 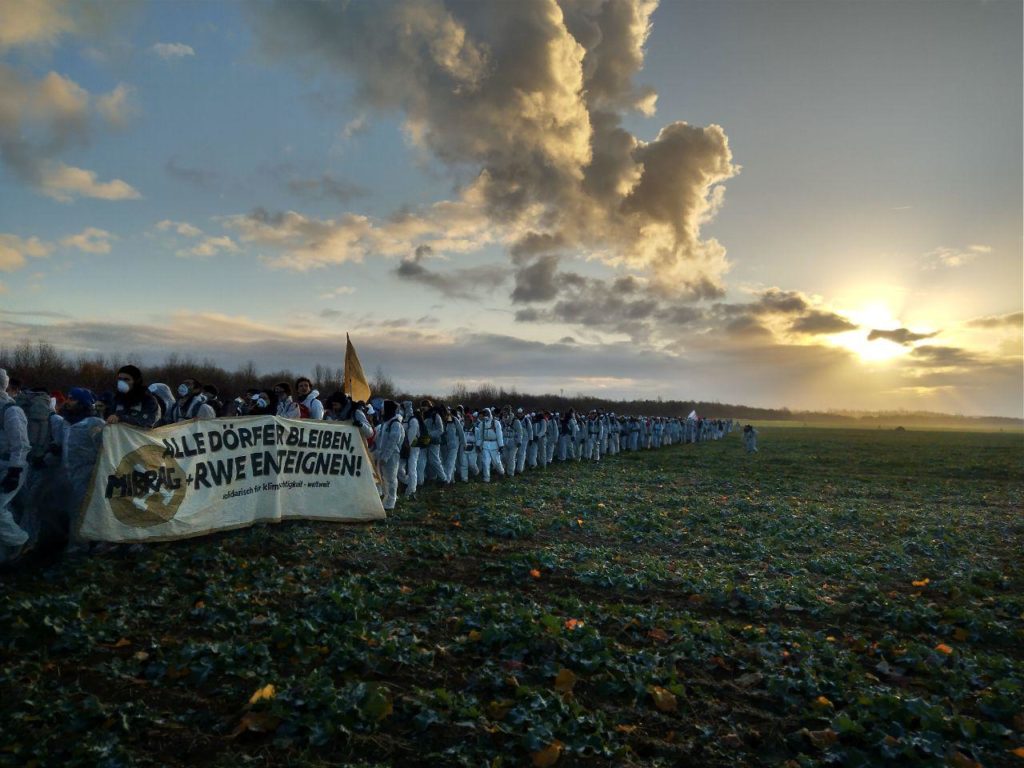 Looking back at the experience, I can only recommend trying out civil disobedience. It can be fun, wild, scary, moving, emotional, inspiring and a way to connect, to others, to yourself and to the world. But I also must acknowledge my privilege here. As a straight, white man, I know I have it way easier than others who do not fall into these demographics – especially when interacting with police. My social and financial status also affords me protection and safety, particularly if the worst-possible-scenario would manifest. Many others could not afford good legal representation, or be able to jeopardise their employment, or even leave work for long enough to join such a risky venture. I’m young and able-bodied and can engage in body protest without thinking twice, yet others might have a much harder time with the physical elements to such an action. So, yes, I can only recommend trying out civil disobedience but we also need to consistently work at making it as accessible and inclusive a practice as possible. See you on the frontlines. 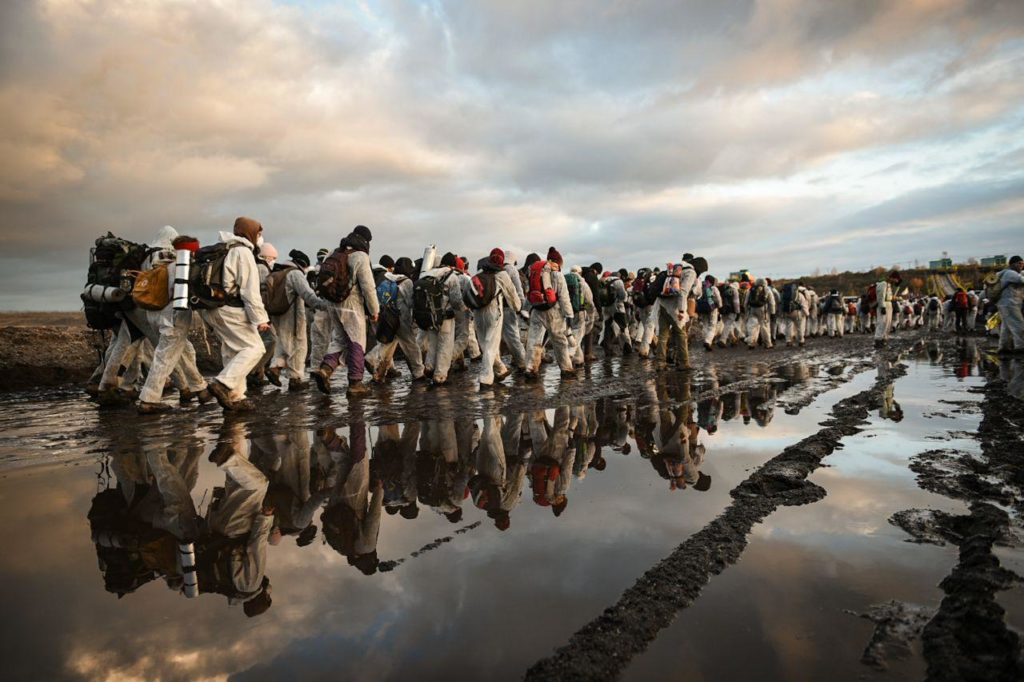 A visit to the Hambacher Forest to meet the activists living in the forest to fight the coal giant, RWE. *this article first appeared on tbd* as part of the 'Adventures in Activism' column. “My fingertips are thoroughly numb, as a lilac dusk descends on Hambacher Forest and the dying light spotlights a solitary treehouse [...]

What to Bring to Your Protest Organising a successful protest is no picnic, though protest picnics are definitely a solid tactic to improve protestor satisfaction and endurance. There are some magic ingredients that can seriously improve the turn-out, the overall vibe & ultimately the societal impact of a protest, and sharing these [...]