Why Activism?
by Ivan March

A case study on the nature and value of activism.

*this article first appeared on tbd* as part of the ‘Adventures in Activism‘ column. 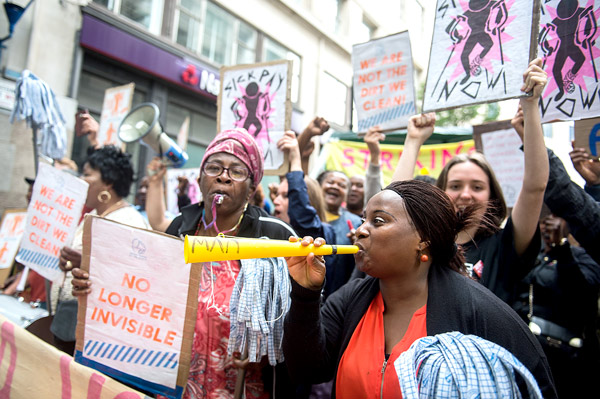 For anyone who has spent more than fifteen minutes with me, they will have probably received an earful of gushing about this or that activist collective or why this social movement is so timely or inspiring. Fortunately, I also often get challenged as to why I believe that activism is the vehicle for change.

Sometimes the challenge comes from a place of genuine curiosity and an openness to deeply engage with the answer and other times it comes from a combative place from someone who has already made up their mind and they’re looking to debate me into submission. This piece is addressed to the former (with a hope that the latter also engage).

I will offer up my thoughts via a case story, one that I was able to follow closely. Last autumn, the London School of Economics (LSE), was at the centre of an ongoing labour dispute regarding the pay and conditions of the 800 cleaners working at the university. The cleaners had been subcontracted out for decades and their contracts meant lower pensions, reduced if any parental and sick leave, and low to no holiday pay, when compared to directly-employed staff.

Pretty shameful, even by the rock-bottom standards of London’s casualised workforce. The shame-counter had reached Circe Lannister levels particularly because LSE presents itself to the world as a progressive, liberal institution that pioneers research into combatting inequality, while sustaining it.

Enough was enough. Several groups started mobilising around this issue, first and foremost, United Voices of the World, a members-led, campaigning trade union of mainly migrant & precarious workers, supported by the student-led ‘Justice for LSE Cleaners’ campaign and what would become the ‘Life not Money’ campaign, an informal collective of mainly London activists, everyday citizens who rallied against exploitative labour. In addition, journalists such as Owen Jones, who penned this shrewd article on the strikes, took to social media and massively widened the cleaners’ platform. 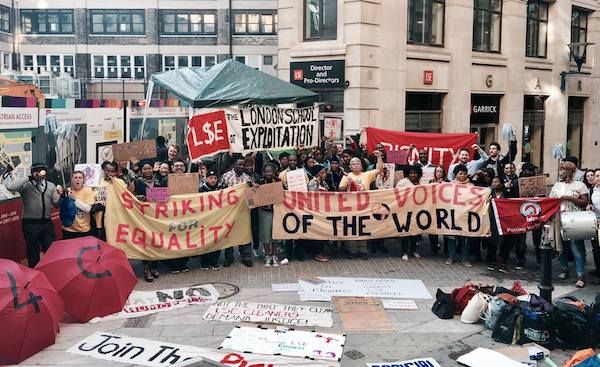 It does not take a detective to realise that the aforementioned people are pretty heterogenous. From the more formalized trade union UVW, to students, united around the fact that labour transgressions are being committed by their place of learning, to journalists, acting as solo agents either backed by mainstream publications or left alone to the pulpit of social media, and citizens, united geographically and in spirit.

The Wikipedia definition of activism, most appropriate considering it is an open, crowdsourced encyclopedia, boils it down to ‘efforts that promote, impede, or direct social, political economic, or environmental reform or stasis with the desire to make improvements in society’. Meaning, that the unifying feature behind activism is the cause, the medium can and does vary.

Activists Are Flexible With Numbers (and a Lot of Things)

There is immense freedom when it comes to activism. While there are also constraints; it is very difficult to fundraise without having a legal entity (i.e. a registered charity/Nonprofit) there is less accountability. ‘Freedom’s just another word for nothing left to lose’ sang Janis Joplin, and the spirit of the 60s lives on in activists today. The workers ultimately chose to strike, and they took seven days of strike action in total.

However, when you strike you do not know if some will ‘cross the picket line’ and whether employers will simply not acquiesce to your demands, in which case you may be left in an immensely precarious position. You also do not know how many fellow strikers will join you. It is scary. There is uncertainty. It could last a long time. The LSE cleaners went through a 10-month period of direct actions and negotiations. In the end this dispute saw the largest number of cleaners – all of whom are migrant and nonwhite workers and most of whom had never been unionised before – in UK history, strike from a single workplace. In the end, it paid off. 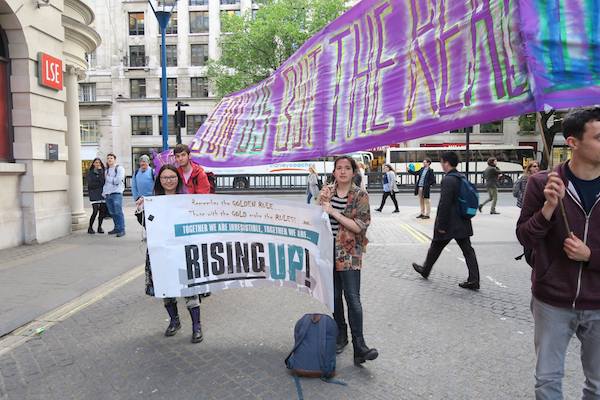 Activists Don’t Have to Worry About Diplomacy (as much)

Student activists and perhaps also the cleaners had to maintain some decorum; at least in the language they were using in their campaigns, after all, post-strike everyone needs to get along in the same space. However, the ‘Life Not Money’ campaigners being a concerned citizens collective, meant they could say whatever the hell they wanted. They decided to be particularly cheeky and focus on the salary of the LSE Director which was estimated to be in the region of £500,000 – a figure which had doubled in a few years while pay of lecturers and admin staff had consistently declined as they were placed on casual contracts. Their demand was that the Director take a 20% pay cut (£100K) and the money be used to support better pay and conditions for the lowest paid people at LSE including the cleaners. While cleaners held placards state L.S.E. London School of Exploitation, the citizens could kick up it up a notch.

“When injustice becomes law, resistance becomes duty”, usually misattributed to Jefferson this is one of my favourite activism mantras. Activists, are doers.

Sure, some activists are theoreticians but pure theoreticians are not activists. Taking action means dealing with fluid circumstances and making snap-decisions in shifting contexts (also recognizing that all contexts have the capacity to shift). Four citizen activists were arrested and charged with criminal damage after they spray chalked LSE premises. The following week they planned to repeat the action, which would probably lead to their arrest again, with possibility of bail. They planned to break bail conditions with the aim of being put into prison on remand.

Before carrying this out, the activists sent an open letter to the Director that unless they got a meeting to seriously discuss the demand for a pay cut they would continue our civil disobedience and were prepared to go to prison. They proceeded with the spray chalking of roads and university buildings three times and blocked a public highway which resulted in approximately 30 police officers arriving, clearly prepared to arrest people for breach of the law (roadblocking). However, it later became clear that LSE management instructed the police to avoid arrest and after several hours of sitting in the road the activists left according to their own will. They did not want the bad press and the reputational damage that it might cause. These light flirtations with the grey zone of legality mounted pressure on the oppressor of our story. 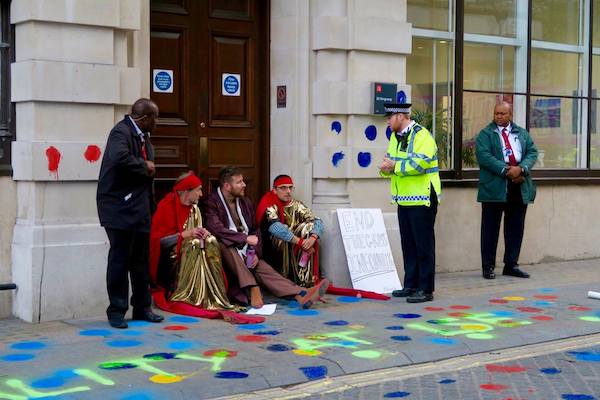 Or it can be. Or at least it should be. Activism breaks free from many formalities or protocols that are often left unchallenged and are just followed on the grounds of ‘just because’.

Approximately 30 to 40 campaigners, dressed up in costumes usually something on a science fiction or Star Wars theme, cos why not, were there to give out leaflets, inform the public about the cleaners dispute or spray chalk the university premises. Not only did costumes diffuse tension, since nobody can turn down a jedi, they also made for more catchy and thus shareable visual materials, helping to get the word out even more. Any occasion for fancy dress. But more broadly pleasure activist Adrienne Marie Brown captures this well, ‘pleasure is an important measure of freedom, and that we need to make justice the most pleasurable experience we can have’. 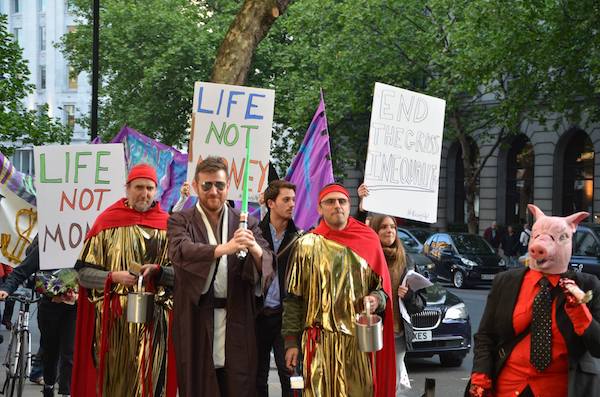 Not always, but often. This stems from the bottom-up approach guiding most activist work. Strong movements usually have strong leaders, but that doesn’t mean that participation and active co-creation by the followers is not upheld. Many heads are better than few. The citizen activists decided to interview the cleaners and then they put up flowers along with written statements that revolved around quotes taken from these interviews, onto the walls of the LSE buildings. This proved to be a gentle and effective way of getting people’s attention and drawing them into the very personal, very human struggle that so many people were going through.

This idea emerged because (a) there was space for creatively designing an action and (b) because co-created, participatory processes allow us to build upon and improve each other’s ideas, something that is too often compartmentalized in a professional, NGO-like environment. 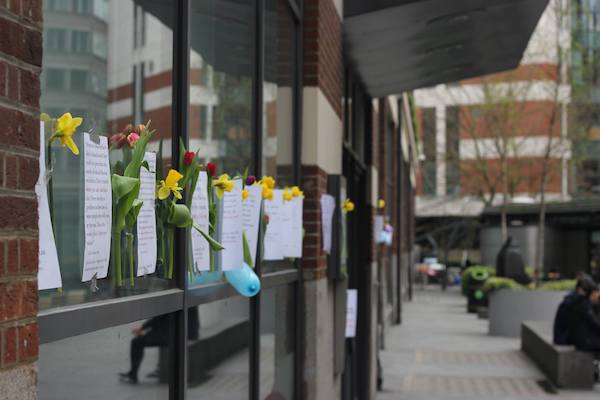 The workers won! The cleaners became regular employees of the LSE from Spring 2018, which ensures that they receive, among other things, 41 days annual leave, 6 months full pay sick pay and 6 months half pay sick pay, plus proper employer pension contributions of up to 13% of their salary. Great for them, but more importantly for the movement, they created a legacy action.

UVW organiser Petros Elia said: “migrant workers, beyond the immediate benefits they get for themselves and their colleagues, are also encouraging other workers to take action: they’re not a drag on wages, they’re fighting for everyone’s.”

Lo and behold, six months following on from the LSE victory, in late April 2018, more than 100 outsourced staff, from six different workforces, under three different employers, stopped work at the University of London. From near-inactivity just one year ago, they managed to build what will likely be the largest outsourced workers’ strike in higher education history, most definitely on the momentum and inspiration built up by the LSE cleaners.

Yes, I am biased. But I’m informed-biased having worked for many years with both large, formal, hierarchical organisations as well as loose, informal activist collectives. Relativism aside, yes various pressure points must be applied at various societal levels to bring about change, the formless form that activism takes is the most creatively messy and authentically human that I’ve come across to date.

This article is part of the “Adventures in Activism” series, a defiant column letting you in on who the coolest cats of today’s rebel alliance are, why grassroots movements matter more than ever, and what radical systemic re-envisioning is being done by badass activists around the world. Discover more stories like this, here.

- more
Deconstructing Racism One Statue at a Time
by Ivan March

Rich, white and male. European cities are peppered with statues, and you’ll find that the overwhelming majority of these have a few things in common. *this article first appeared on tbd* as part of the 'Adventures in Activism' column. Statues of people have much longer life expectancies than people themselves. Bronze and marble [...]