Much like Christians, engineers or assholes, nobody is born an activist. Much like it takes some serious conditioning to raise someone to believe in an omnipotent deity, or how to build a bridge, or to flip-off pregnant women while screaming racial slurs, it takes some effort to inculcate the activist spirit in a developing human. 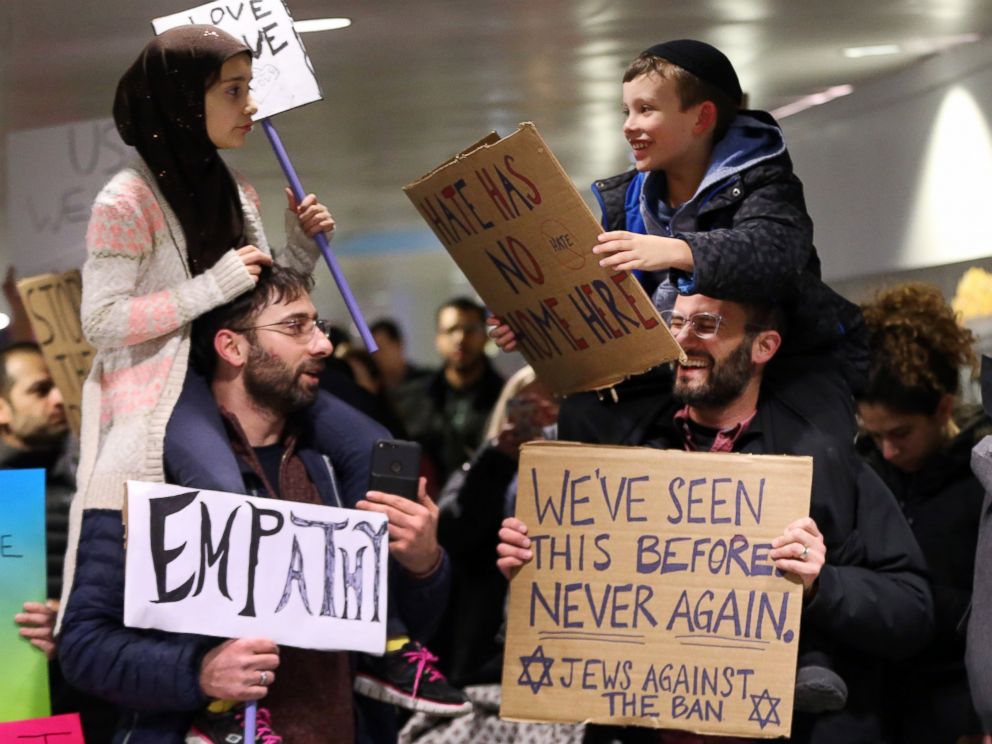 My spiritual godson Ivo was born a couple of months ago, and since both his mother and father are staunch, crazy committed activists I know he’ll get all the necessary activist nurture. But I felt compelled to write this piece in order to inspire other young parents about that they can do to instill a sense of social justice, cultivate a love of nature, and imbue their fresh, little earthlings with the activist rebel geist that can move mountains. 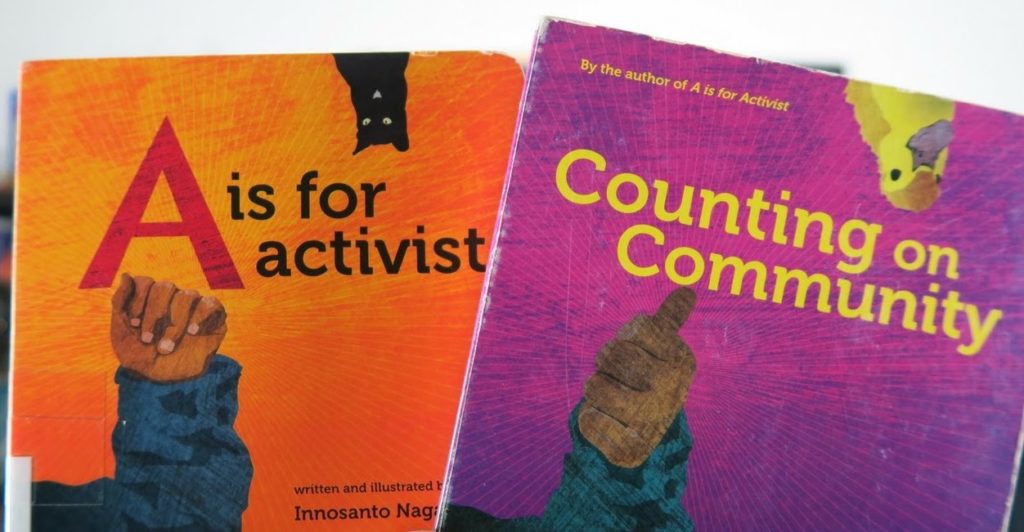 Give those little ones an early start with the ABCs book ‘A is for Activist‘ by Innosanto Nagara, a rhyming booklet that teaches your kids language but far from taking the conventional route. It is reads as if it was a collaborative project by Dr. Seuss and Rosa Parks.

F is for Feminist.

For Fairness in our pay.

For Freedom to Flourish

and choose our own way.

The book intro states “families who want their kids to grow up in a space that is unapologetic about activism, environmental justice, civil rights, LGBTQ rights, and everything else that activists believe in and fight for”. The book brings up issues that activist parents will resonate with, values such as community, equity, and justice. Plus the pages are chew-friendly so the little activists can really sink their teeth into some of these issues while still learning to walk. 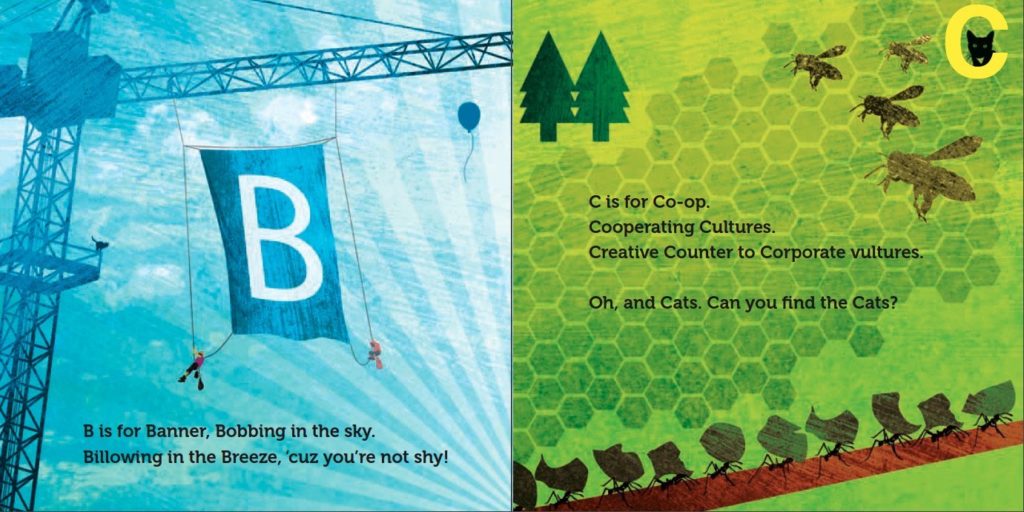 2) Take Your Kids to Marches

Monkey see, monkey do, so why not establish some good habits while they’re still little. After all, protesting is a family affair, since everybody is usually sooner or later affected by whatever is being protested. Of course I mean nonviolent protests, though it is your parental decision if you want to wrap your toddler in Kevlar and take them to a riot. But protests are mostly beautiful, communitarian affairs, there is song and music and chanting, and smiles from strangers, and cupcakes and tie-dye, and either joy or necessary sadness. The spirit of collective effervescence, or the feeling of being a part of something bigger than yourself is extremely intoxicating and it gives participants the perspective that we are stronger united, and all-in-it-together – important life lessons that are best taught experientially, out there in the streets. 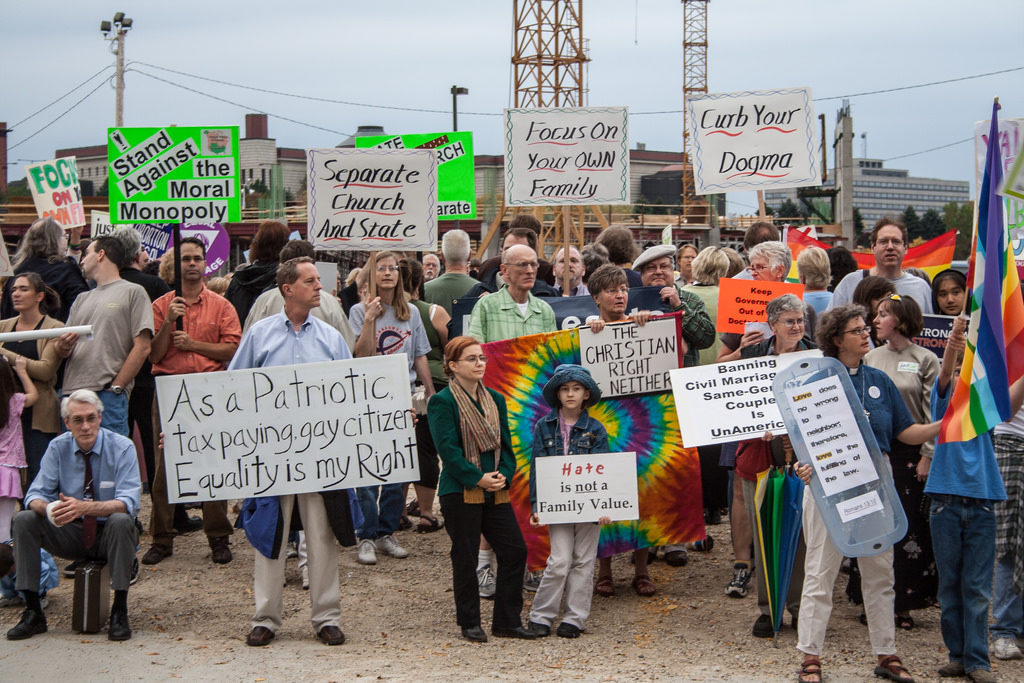 3) Artivism Is Not For Adults Only

Political art can be an evocative and easy way of getting kids and teens interested in both art and societal resistance to injustice. Familiarise your little people with street artists and help them cultivate a love of graffiti, as some of the most evocative, subversive political art is found outside gallery walls. Banksy is usually the one who gets all the attention but Dave the Chimp, Blu, Ecsif and countless other less well known artists utilise satire, irony and dark humour to create resonant social, political, and humanist messages. But visual literacy is trained so it is up to the parents to get those developing optic nerves trained. Then there are artivist collectives such as the Guerrilla Girls who “wear gorilla masks in public and use facts, humor and outrageous visuals to expose gender and ethnic bias as well as corruption in politics, art, film, and pop culture”. The undermine mainstream narratives by revealing “the subtext, the overlooked, and the downright unfair” and believe in “an intersectional feminism that fights discrimination and supports human rights for all people and all genders”. Find one of their exhibitions near you.

Tit-for-tat, is great if you’re teaching your kids genetic evolution, ‘one kind turn deserves another’, holds true when you’re talking about reciprocity, but the real beauty comes shining through unsolicited kindness that expects nothing in return. The Random Acts of Kindness movement, “believes kindness can change the world”, and it declares that “a person who reminds everyone around them how much love there is in the world, who inspires hope and generosity with their actions as much as their words— is a RAKtivist”. If your kindness idea well is running dry, do not fear, because the RAK Foundation has complied an inspiration list for those who need some extra motivating and boom your family weekend plans are sorted. 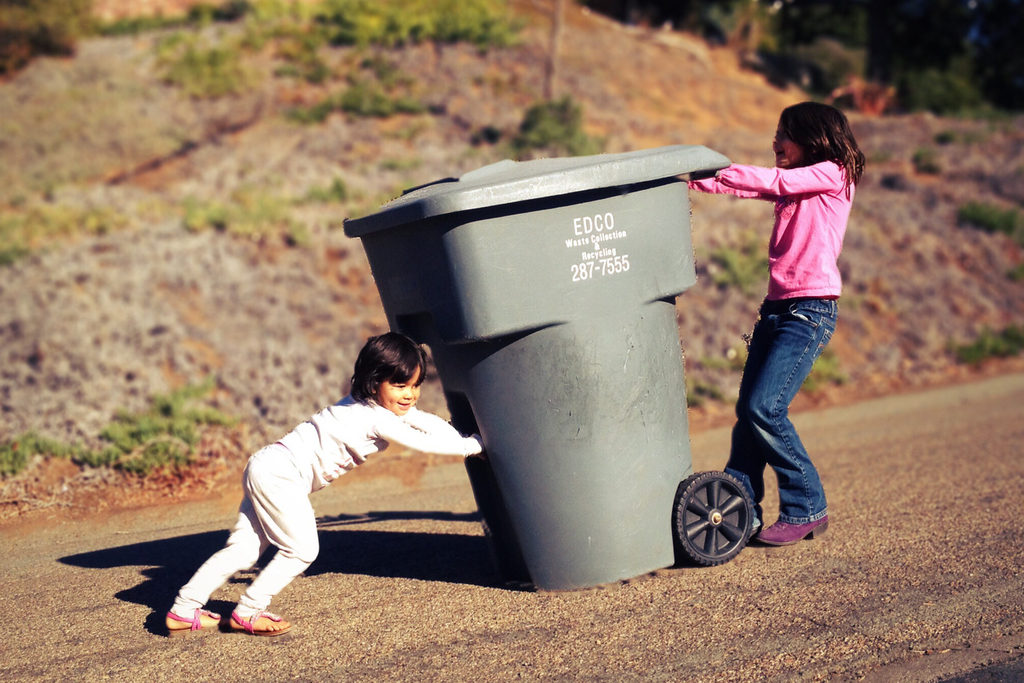 This book is the most-funded original book in the history of crowdfunding. ‘Good Night Stories for Rebel Girls’ reinvents fairy tales with the stories of 100 heroic women from Elizabeth I to Serena Williams and it is illustrated by 60 female artists from every corner of the globe. Of course it is not only for girls! Little boys need to be read(ing) books such as this one just as much, so as to grow up revering women as well as understanding why historically women had a much, much, much harder time expressing their gifts, finding funders, supporters or an audience and earning the respect they deserved. 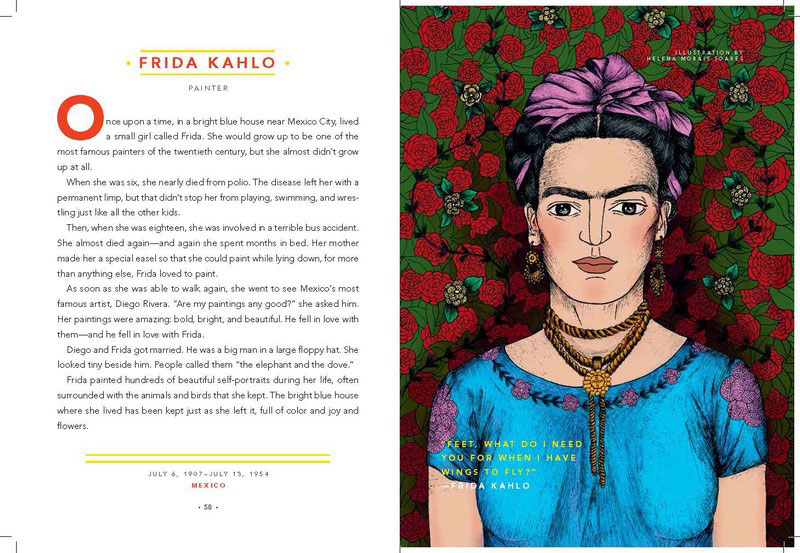 6) Point out their Activist Peers

This year was the year for activists minors. Children practically orchestrated and ran one of the largest marches in U.S. history, The March for Our Lives against gun violence. Sometimes, they wont need your help finding inspiration, and other times you can nudge them in the direction of great role models, especially those that at a similar age to them so they can both relate and realise the invaluable lesson that your age does not necessarily determine your power. Fifteen-year-old Swedish climate activist, Greta Thunberg, has made some serious waves internationally by going on strike during school hours in front of parliament and sitting there with placards. She said, “the climate is not going to collapse because some party got the most votes. The politics that’s needed to prevent the climate catastrophe—it doesn’t exist today. We need to change the system, as if we were in crisis, as if there were a war going on”. This is the type of beautifully radical and necessary narrative kids need to be empowered by and emulate. In Australia the ripple effect instantly took hold as thousands of schoolchildren went on strike over ineffective action around climate change. More Greta Thunbergs, fewer Justin Biebers. 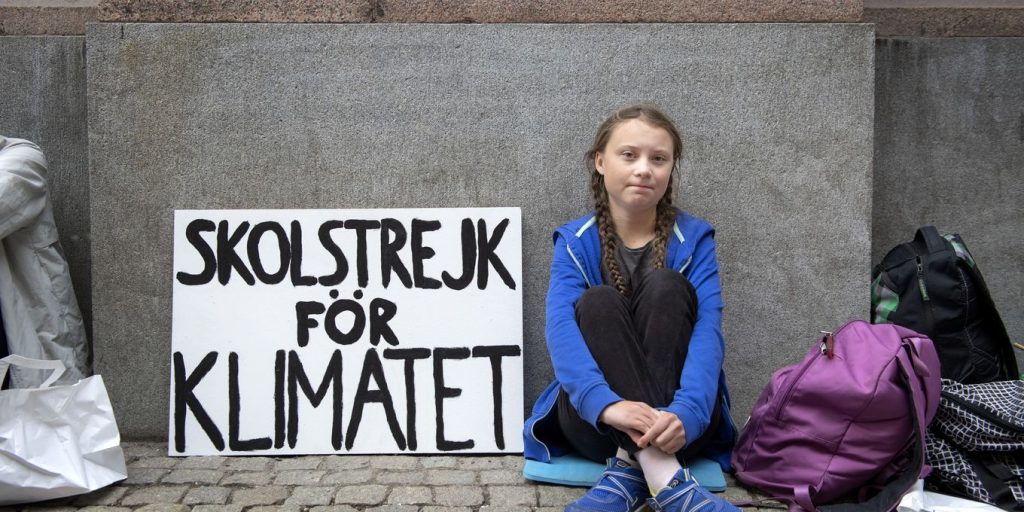 In Native American and First Nations cultures, communities of belonging were nurtured. Lakota anthropologist Ella Deloria described the core value of belonging as ‘being related, somehow, to everyone you know.” Treating others as kin forges powerful social bonds that draw all into relationships of respect. But Lakota culture is also inherently nonanthropocentric, we, Homo sapiens are not the centre of the universe, instead we exist in interdependent communion with all living beings that equally merit our respect. Exposing your children to indigenous cultures and wisdom is a way of breaking open the limited horizons of western dogma, while forest bathing as a family and getting your children to cultivate a deep affinity for nature is step one. Much of this is innate, and therefore isn’t so much something that children need to learn, but it is something that you as parents can help them to not forget. 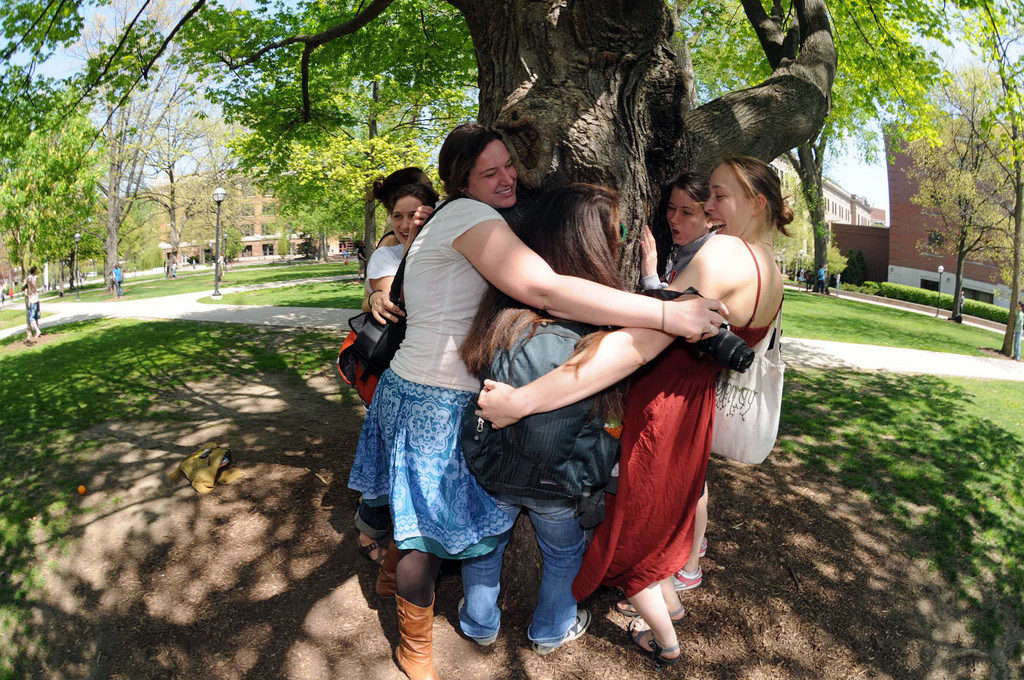